Posted on November 4, 2018 by crossingsauthor

Between finishing my new book, marketing my other books, responsibilities at Backstreet Gallery, and preparation for the 8th Annual Florence Festival of Books, it was a busy summer. I had hoped to restart my blog in May when I returned from California, but that did not happen.

Now the new book is at the printer, marketing my other books has slowed down with the tourist season over, and the FFOB for 2019 won’t start until next April. That leaves Backstreet, which is not a problem when the others are not consuming most of my time. So I’m hoping to get back on track of posting a blog each Friday.

My new book, The Oregon Coast Guide to the UNEXPECTED, that which is odd, unusual or quirky covers 26 locales that were unexpected when I actually saw them. The kind of place you would say, “Who’d a thunk it!” or “What the hell!” During my 21 years as an editor/staff writer for Oregon Coast magazine, these were the locales that were the most unexpected. They cover the entire coat, ranging from Astoria to two miles this side of the California state line.

Here is the cover of my new book.

When I first got this idea two years ago, I mentioned it to my publisher, Bob Serra, who did not discourage me. I started with a list of 35. I had to delete some because they were no longer what they once were or no longer existed or those in charge didn’t want certain facts included or I could not come up with appropriate photos. All places in the book were visited and researched either in 2017 or 2018 and all photos are recent and of high resolution.

There are no haunted places, no ghosts; everything can actually be seen by anyone. Some are only visible at high tide and one at extremely low tide. Some are man made and others created by nature or demonstrate nature in action.

Although I finished the writing by the first of March this year and the fact checking by mid-April and turned it over to Bob for editing, that was not the end of my participation.

Last May, when I got back from California, I started on the search for photos. I had mentioned that I needed them by the end of May to all who were doing the fact checking on the 26 stories in hopes that the book could be out by the end of summer. Silly me! By the end of May I had the ones I had taken and very few others.

In my hunt for photos, I dealt with numerous volunteers at museums and public entities, a whole town after writing a letter to the editor requesting photos, various ranks of the Coast Guard, and rangers at the BLM, three different state parks, one national park, and two forest service entities as well as numerous businesses and lots of somebodies who knew somebody who knew somebody with photos. And, yes, I went up and down the coast taking photos and so did Bob. And, yes, I went online and found some but only one actually worked out and that was from Wikimedia Commons.

Some stories had three different sources for three photos. One of the problems was that Bob would only use good quality, high-resolution photos, and many of the photos submitted looked great, but were low resolution. When asked to submit in high resolution, it wasn’t possible, and therefore those photos were unusable. It took until the end of September to get 85 good quality, high resolution photos for the 26 stories. We ended up using 26 photos that I took, 15 by Bob, and I paid for 15 from professional photographers. I could write a book about just the trials and tribulations of acquiring the photos I needed.

One of the UNEXPECTED places in the new book. Hint–it’s on the North Coast.

During the summer I also did much of the front and back pages stuff like the introduction and table of contents and wrote the back cover and Bob designed the cover. By the first of September, we had enough photos that I could write captions and photo credits and Bob could design the stories. Then the last few came in. Whew!

The book went to the printer October 5, and we received the proof copy about two weeks ago. In about another two weeks 1,500 copies should arrive. So after all our hard work, The Oregon Coast Guide to the UNEXPECTED, that which is odd, unusual or quirky! will soon be available. Guides do well and so do books about the weird and odd. Since this is a guide to the odd . . . I think it will do well. I already have 105 names and emails of folks who want to be notified when the book is out and very few of them are from Florence. I’ll notify these folks and put a press release in the newspaper here in Florence when the books actually arrive.

Marketing my other books

Giving a bridges PowerPoint program at an RV park south of Florence..

I did a few PowerPoint presentations, went up and down the coast a couple of times delivering books where I had called ahead, and sold books for the fifth summer at the Yachats Farmers Market on Sundays. I put 2,186 book-related miles on my car between July 1 and Oct 31 (and I was gone much of Oct)

I enjoy being a part of a community of artists of which some are also writers. I’m actually the only writer there that is not also an artist. So I always tell visitors not to ask me to draw anything! I really enjoy being on duty and meeting folks from all over the country visiting the Oregon coast. And my books sell there—especially when I’m on duty.

We worked hard all summer. In June, it was getting word out to potential participating authors and lining up sponsors, In July and early August, it was accepting applications, sending out information, and answering questions from the 80+ authors and publishers who signed up. August and September were busy with organizing Friday’s activities––the afternoon panel discussion and the evening Meet ‘n Greet and Keynote Speaker––, arranging the caterers for both Friday and Saturday, and designing posters and flyers and having them printed. I was particularly busy distributing posters and flyers to towns and cities outside of Florence, arranging ads, writing press releases, and articles during those two months. Recording radio spots and interviews also took time. It takes a lot to put on an event and having it run smoothly with no glitches. 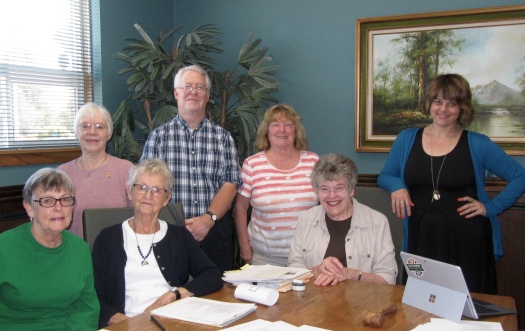 I think it was the best one ever. So all the work was worth it. On Friday evening, we had a terrific Keynote Speaker—New York Times bestselling author Amy Stewart. Her Kopp sisters’ books are great fun and based on the true life story of Constance Kopp, one of the first female deputy sheriffs in the country. Stewart gave a very entertaining talk. I was impressed with her rigorous research and fact checking.

On Friday afternoon, we had a dynamite panel of four authors who spoke and answered questions regarding marketing. Cindy Cashman, marketed her book, Everythingt Men Know About Women, in 1995 and it catapulted her to being one of the most successful self-published authors ever—and it was blank! So it was all about marketing. Cashman thinks out of the box. Melody Carlson, from Central Oregon, has written more than 200 books for various age groups and many are romances. She has sold more than seven million copies of her books and goes through a traditional publisher. She is one of the most prolific authors in America.

Ron Lovell, a past university professor who taught many years in the journalism department at OSU, has written 14 books since retiring that are in the mystery genre and many take place on the coast. Then there is Tracy Markley, a personal trainer, who has written three books about fitness for seniors and stroke victims. Although relatively new to the writing game, Tracy uses every conceivable way to market her books. These four panelists offered quite a variety of ideas for marketing.

Marketing panel (l eo r) Cindy Cashman, Melody Carlson, Ron Lovell, and Tracy Markley and the moderator, me, perched on a nearby stool..

At the book festival on Saturday, all but one of the panelists participated selling their books at their own tables and the fourth one was there chatting with participating authors. And Amy Stewart was there for a while. Among well-known authors participating—Bob Welch and Bill Sullivan were there along with 73 other authors and seven publishers.

I chatted with many participating authors and bought seven books and traded one. A few, I’ll give as Christmas gifts. I’m pleased to report that I sold more than I bought and got 14 more sign-ups for my new book. Both participants and attendees seemed to have a good time. So once again, it was a successful event.

As soon as the Festival was over on September 29, I had to finish preparing for a trip to the state of Maine with my sister. We were leaving October 1 for a two and half week trip. What a hoot to fly from Portland, OR, to Portland, ME. So my next three blog posts will cover the Maine trip. It was Mainely terrific––typical Maine humor!