Posted on November 20, 2018 by crossingsauthor

We loved our stay in the Maine Beaches Region on the south coast of Maine. Except for the first day when it rained, the weather was lovely. On this section of the trip, the weather was sunny on some days and others were overcast but no rain.

We got up early and packed and enjoyed our last of the great comp breakfasts at The Milestone. We were off to South Berwick to go through the Sarah Orne Jewett museum. We got their early and parked right out in front and sat in the car and read. Nothing was open when we first arrived. Besides, it was cold. 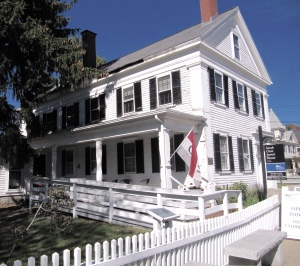 Next door to the original Jewett home, this is the visitor center within another Jewett home on the same property.

The wait was worth it. There were a few other visitors, and the guide took us on a very thorough trip through the house where Jewett was born and  lived most of her life. Nearly everything in the house was original. We saw the desk that she wrote at. Her shelves with the items she treasured as a child and as an adult. It was really a step back in history. The Jewett family was well off, and Sarah traveled in circles that included the rich and famous. This also included the most famous writers of the time, such as Ralph Waldo Emerson. Sarah lived between 1849 and 1909.

She was known for writing great dialogue in correct dialect. Edna loves her as a writer. I found it slow going to work my way through the correctly spelled dialect to try to figure out what they were actually saying. Edna gave me her copy of The Country of Pointed Firs in May, and I was still working my way through it on this trip in October. I finally finished it on the trip. (It’s not a big book.) 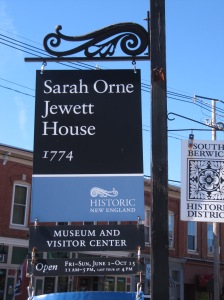 We had lunch in the same café where we had eaten on our first day in Maine. Then we headed back to Hwy 1 and up the coast to South Portland. We traveled the same route as the day before when we were searching for the Portland Head Lghthouse. In fact, the motel was only about half a mile farther up the highway from where we turned to the lighthouse.

When we got to the motel, they had us booked in a room with a king-size bed. Not what we had reserved. So no way! Edna sometimes awakens and reads during the night, and I have restless legs and need to be able to kick to my heart’s content. Of course, there were no rooms available with two beds of any size. So we asked for a cot. They said that it might not fit because the king rooms were small. We told them we would make it fit. 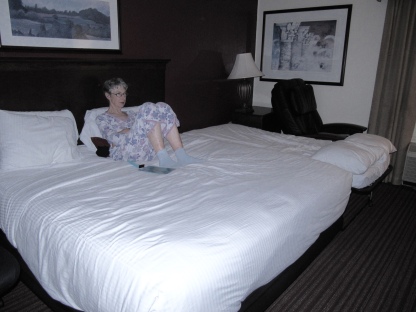 Edna sits on the king-size bed in our room of nearly wall-to-wall beds. We made it work.

And we did, but there wasn’t an inch to spare. It was the largest cot I had ever seen–the size of a twin bed. We had to rearrange much of the furniture and ended up with a solid bed look to the room. But we were happy. Not so with the dinner next door at the Maine Table–only bad meal on the trip.

The breakfast room had a good selection but had the feel of a large, crowded restaurant with everyone constantly moving to and from the buffet tables. South Portland has a city feel, and folks seemed busy, busy.. We missed the cozy, friendliness of The Milestone, where everyone was from somewhere else.

We headed north on Hwy 1, which turned into 1A and there were so many signs, it was confusing. We made it into Portland and into a parking lot, where it was $8 for two hours. We found another spot before the two hours were up and moved the car. It was on the street and had a frustrating meter. We got so discombobulated that we didn’t grab the ticket and put on our car’s dash. But the fellow behind us, waiting to use the meter, tracked us down and handed us our ticket. We were thankful and felt a bit stupid. So we walked back to the car and placed it on the dash. You’d think we’d never been in a city before. And Portland, ME, is a whole lot smaller than Portland, OR. 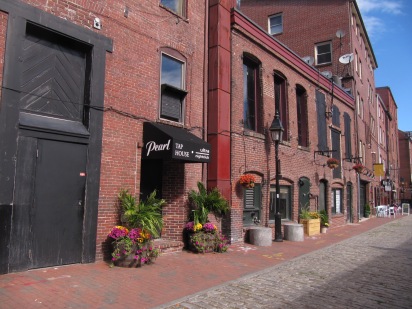 Lots of brick in Portland’s Old Port District and lots of charming shops.

We had hoped to go on a city tour on a fire truck, but like with many things, it didn’t run after Labor Day. But we did get to browse Portland’s Old Port District. It is very touristy with many shops. We did some shopping, and I got such big-ticket items as refrigerator magnets, post cards, Christmas ornaments (the only thing I collect), and some great kitchen towels.

We then returned to the car and drove in circles trying to get from the Port District to the Portland Art Museum–lots of one-way streets. We finally found it. Then we had to find parking. It was definitely worthwhile with a number of Winslow Homer’s and Edward Hopper’s and other paintings with familiar artist names, all displayed beautifully. We even had lunch there. I had lobster bisque. Quite good. Then back to South Portland and our motel. I napped and Edna read. For dinner, we headed south on Hwy 1 to more familiar territory. We didn’t want to get lost in the big city or eat where we had been the night before. Down the road we found Romeo’s Pizza. It was very good. We even saved a couple of pieces for the next day.

We navigated breakfast once again in the crowded breakfast room and then packed up and were on the road by 9:30 a.m. Not sad to leave the BW Merry Manor. We took the turnpike to Brunswick and split off on Hwy 1. We stopped at a rest stop/Info Center and stocked up on info on every place left on our itinerary. Had long chat with fellow who worked there. Love talking to locals.

Easy trip to Booth Bay Harbor. This is the Mid-Coast Region where the peninsulas are long with long inlets and many offshore islands. You never quite see the ocean on this part of the coast without going through a great deal of effort. You do see lakes and inlets and we continued to see beautiful fall color. Booth Bay Harbor was a delightful town in a hilly setting at the end of a peninsula. Our motel, Beach Cove Inn, was out of town and overlooked a lovely lake. The room was spacious with two beds. We even had a balcony. If we had needed to fit in a cot, we had room for half a dozen. We loved all the space, but could have used a couple of chairs and a bigger table. We brought in chairs from the balcony and crowded around a tiny table with a lamp when we were eating our leftover pizza.

We drove into Booth Bay Harbor and browsed the town. Again bought a few things. It was a charming town, but crowded with end of season tourists. We had dinner at a tapas place, sharing a few small plates of food. Back at our motel, we discovered a TV series that we liked—Northwest Forest Law. The first few programs took place in New Hampshire and later ones in Maine. All were the real deal, involving off-road vehicle problems and poaching in the forests or on the sea. The officers bent over backwards to give people a second chance, but when they faced really bad guys, they wrote them up for the maximum or hauled them off to jail. 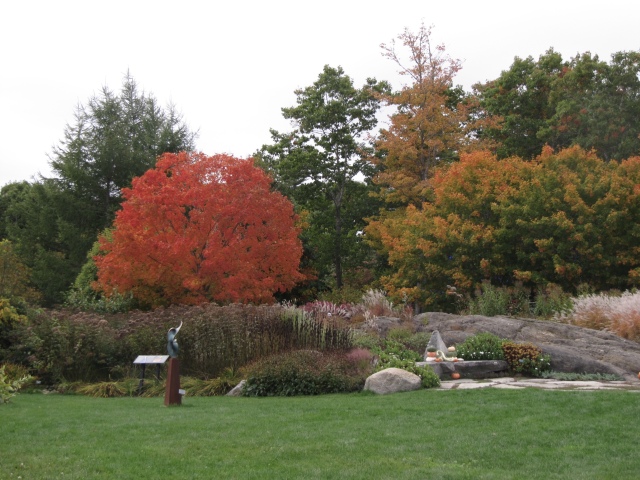 The Coastal Maine Botanical Gardens were lovely even though the flowering plants; bloom was over.

We woke up to our lovely lake view, but the day was cold and overcast. The comp breakfast here was minimal and heavy on carbs (variations on bread, bagels, and pastries), which we had to take to our room. We found that the Maine State Aquarium was closed for the season, but the Coastal Maine Botanical Gardens were open. (Both were on our itinerary.) 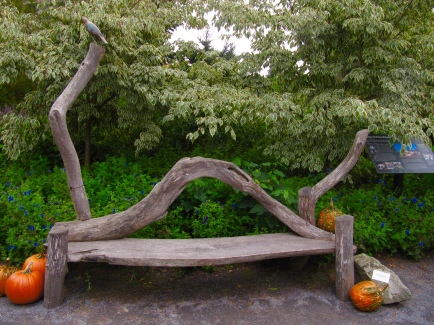 Love Robin’s bench at the garden. Look carefully for the robin upper left.

It was a bit of a drive, on small country roads, but we found the gardens. The flowering plants were past their peak, but the perennials and trees were just fine. It had several gardens with well laid out paths. But it was so cold, we were shivering. So we headed for a deli within the headquarters building. We had coffee to warm up and some cookies. 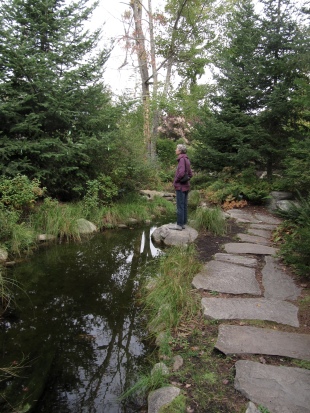 Lovely areas to explore throughout the gardens.

When we ventured out again, it didn’t seem so cold. We roamed around for a couple of hours, taking in many gardens. We took photos and had a great time.  The gardens were wonderful. Then we found a lovely building with a restaurant and had lunch.

We left there and browsed nearby peninsulas.The roads were narrow and winding and signs were limited and we got lost more than once. But we enjoyed all the tree color and the many small towns that were not filled with tourists. We ended up at Hendrick’s  Head Lighthouse. Many lighthouses are now privately owned, as was this one. So we couldn’t get too close. 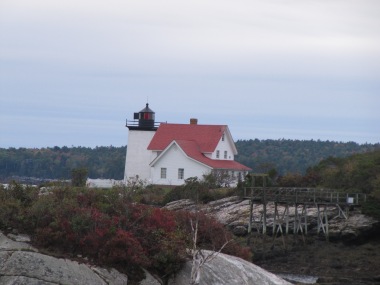 Hendrick’s Head Lighthouse was located on one of the many peninsulas in the Mid-Coast Region.

That evening, we had dinner at Kahlers, one of few places we found open. It was very crowded, and we had to wait But it was worth it. I had a lobster roll in my quest to eat all things lobster. I had seen signs for it everywhere, but wasn’t sure what it was. A lobster roll consists of large chunks of lobster in a light mayo dressing with grilled bread bent upward so nothing falls out. I loved it! Another chance to eat lobster! Back at our motel, we watched more Northwest Forest Law—still New Hampshire. We got so we recognized some of the officers. We found out the next morning that this was the last night for this motel to be open and same for Kahlers. We have loved our stay here at this motel and in Booth Bay Harbor area. Tomorrow we head to Rockland still in the mid-coast region.