Posted on March 2, 2018 by crossingsauthor

Yesterday was the day I had been looking forward to for the past couple of years. But I almost blew it. I had a feeling it was going to be a strange day, when I looked out the window in the morning and it was snowing at 41 degrees. Huh!

Yesterday was the day I was going to finish the edit to my latest book The Oregon Coast Guide to the UNEXPECTED—that which is odd, unusual, or quirky! I had my last two locations to write about. I really got going on it last year at this time, but from last May through this January I didn’t work on it at all. But I got back to it this February.

In the morning, I kept responding to important emails and phone calls. I was not getting to my last two write-ups. I was getting frustrated, but I was also hungry. No wonder, it was 1 p.m. So I stopped to eat. I took some food out of the fridge and put on the counter. Then I stepped back—without looking—and stepped on the cat’s tail. He let out a yowl. He hadn’t been there just seconds before, but I know to look and hadn’t.

I tried to shift my weight off his tail and lost my balance in the process. Down I went! What a helpless feeling when you feel yourself falling. I hit on my right rear with a loud thump and then hit my head on the cabinet door under the sink. My head and hip hurt. Neither good!

This is where I fell. I hit one of the cabinet doors under the kitchen sink and damaged it.

I lay there for a moment and thought, “Oh, my God, what’ve I done!” I figured I’d broken something and neither of my phones were on me or within reach. But I didn’t feel any terrible pain. I didn’t move. I didn’t panic. I took stock.

My hip and head were the only parts hurting. I tried moving everything gingerly at first, and it appeared that nothing was broken. Then I carefully sat up. Again I moved everything carefully and stayed put for a couple of minutes. Nothing seemed to be getting worse. So I thought I’d try to get up, but I couldn’t do it from where I was.

So I moved onto my knees—so far, so good. Then I crawled around the counter into the dining room and by using two chairs hoisted myself up. Again, I took an assessment. So far, so good.

I used a chair from the table and one from the counter to hoist myself upright.

I walked to the bathroom and took an Advil. Then I took a couple of squirts of Hemp Oil Spray, which I’ve been using since Christmas and has made it possible for me to walk almost normal after sitting for awhile. Previously, my one leg just wouldn’t work for up to a minute after about an hour or so of sitting or lying down, and I’d just have to stand and wait. When I did start to move, it was a poor imitation of walking—sort of a hobble. Well, with the spray, I was doing much better. After the fall, I figured it wouldn’t hurt to have a couple extra squirts.

My other go-to fixers are the magnets. So I got out my special fabric tape that I can cut to size and cut a chunk. Then I placed the two magnets and attached to my right butt where it hurt.

Then I went back to fixing lunch. I remained shaky until after I’d eaten and turned on the TV and watched a program to get my mind off me. It worked. My head no longer hurt and the hip pain wasn’t there unless I was in the act of sitting or bending over. Once I was seated, I felt okay. I was so lucky. I could’ve broken something, like a hip or knocked myself out or gotten a concussion. It was definitely a wake-up call. I need to keep my phone on me and check out the various LifeAlert systems that are out there and get one. I am 76 and live in a house of stairs and a cat. Duh!

After lunch, I felt good enough to head for the computer. Within three hours, I had cranked out the next to last piece for my book. Then I spent an hour going over and over it. When I felt good about it, I took a break.

When I’m writing, I’m in a zone and don’t pay attention to anything else. So after returning to normal mode, it was a chance to assess myself. When I stood up, I could tell I was stiffer than normal but no worse otherwise. And my head didn’t hurt at all. I headed to the kitchen for a snack and found that my head had broken the cabinet door under the sink. Guess my old head is harder than I thought. 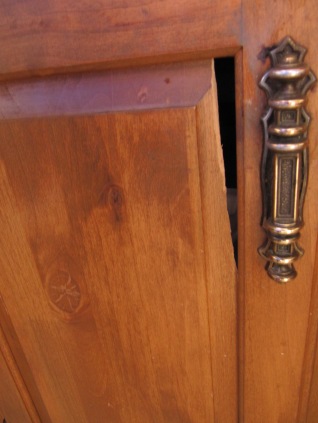 My head knocked loose the inner panel and as it came apart in back, two pieces ripped off. Who knew!

When I came back to the computer to do the last one for the book, I had an email to edit a small piece for Backstreet Gallery. I’m the “official editor” there, so nearly everything is run by me before being posted or sent out. That only took about 40 minutes.

So then I started on the last piece. I reviewed all the notes and research material and planned how to put I together. Then I got started on the last of 27 places that will be in the book. I finished at 8 p.m. I was tired but pleased that I had stuck with it.

Putting these pieces together for the book has had its ups and downs too. I started with 35 and the list changed many times even after I did the research last year. I wrote a piece a week ago about the award-winning Brandy Peak Distillery, located on a back road down by Brookings and the only legal, outdoor, wood-fired still in the United States. I used research material from last summer. When I went online to see if anything had changed, I found a letter to everyone telling about how after 23 years, the business was closing and no longer open to the public. Damn! I had to delete it all! Couldn’t use it now. And another one on the south coast is apparently for sale. Hmm! 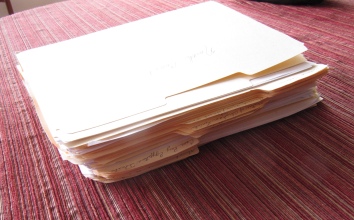 This stack holds 27 files of research.

For the next six weeks, I’ll be factchecking, visiting, and gathering photos for each of the 27 places I’ve written about. I want everything to be accurate before I send to my publisher. I hope to send by mid-April and he will edit and when there are no more editing changes to be made and all the photos are acquired, he will lay it out. At that point, I become the editor. After trips back and forth between us until there are no more changes to be made, it will be ready to send to the printer. And I’ll have 1,000 copies printed. I hope to have them in my hands by the end of September for the Florence Festival of Books, but if not, I’ll settle for having them for Christmas sales.

So although I fell and scared myself, I apparently will be okay. (Not so the kitchen cabinet.) And I completed the last two segments for my book, in spite of it. Yay!!!! I always feel good when I complete a writing project. It was definitely a day of ups and downs. And one I will long remember.

Judy Fleagle spent 22 years teaching 1st and 2nd grades and 21 years as editor/staff writer with Oregon Coast and Northwest Travel magazines.Since 2009, she has written five books: "Crossings: McCullough's Coastal Bridges," "The Crossings Guide to Oregon's Coastal Spans," "Around Florence," "Devil Cat and Other Colorful Animals I Have Known," and "The Oregon Coast Guide to the UNEXPECTED!!!."
View all posts by crossingsauthor →
This entry was posted in Judy's Book Adventures, Uncategorized and tagged falling, The Oregon Coast Guide to the UNEXPECTED. Bookmark the permalink.