Posted on February 23, 2018 by crossingsauthor

I’m usually pretty easy going. Not much pisses me off. But there are a few things that really bother me. And I’ll bet I’m not the only person with these frustrations.

I have arthritis in my thumbs and I have had for years. The upshot is that it’s no longer fun to open anything. I have a couple of helpful tools intended to pry off lids, and I have knives and hammers that I use when the helpful tools don’t work.

I try to get medications and supplements without childproof caps. I only have one prescription that I take, and I don’t notice the lid at the time of purchase because it’s closed up in a bag. Most children above six don’t have trouble getting those caps off, but I simply can’t press down while turning at the same time any more. 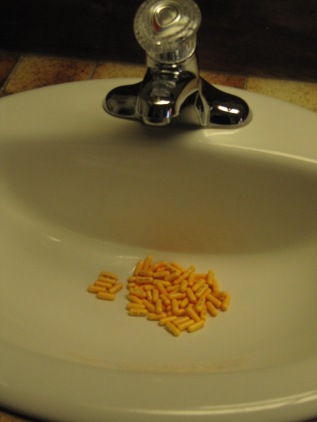 And a bunch of pills went down the drain.

I got so frustrated a few months ago after trying and trying and trying without success that I banged the large container of 180 pills on the faucet. Lo-and-behold, it opened. But the stopper was not pushed down in the sink and several pills went bye-bye down the drain. Enough to stop it up! Really dumb, I know. I pried a few out but not many. I simply left it, and used the other sink in my bathroom for the next couple months. By now, they’ve disintegrated or worked their way through, and I’m back to using my usual sink.

Last week, it was the lid on a container of almond butter that tried my patience. I tried the usual tools and nothing worked. I got out my hammer, which often does the trick. Not this time. So since it was not a glass jar but a plastic container, I got out the serrated butcher knife. I sawed my way around while holding it over a large bowl. It was quite runny, so as soon as I could, I let most of it run out. Then I finished cutting through and got out my trusty tiny spatula and got the rest of it out. I eventually got it all into a container of appropriate size and put it away. 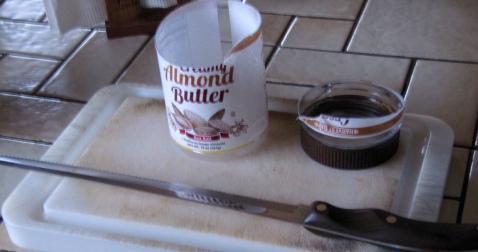 When all else fails, get down the big knife. I never could get the lid off.

Then the cleanup began. Imagine runny peanut butter. It was all over the knife, the two parts of the original container, the bowl, the spatula, and everything I had touched in the process, including my cheek and nose. From start to finish, it took a half hour to get into my almond butter and get it cleaned up. I’d almost forgotten why I got it out in the first place.

Once I have a new computer and have figured out how to do that which I need to do, it seems like it’s time to upgrade. And I don’t want to because I’ve just gotten used to it and feel comfortable. Besides, some upgrades don’t make things better, which I would think would be the whole point of an upgrade! 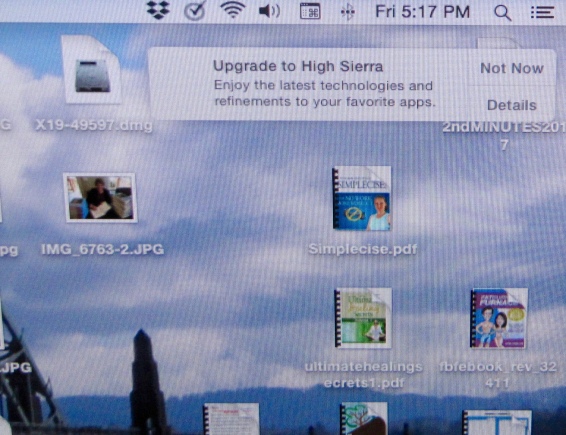 I don’t like the upgraded iPhotos on my Mac. Before, I could take photos and as soon as they were saved, I could insert them in my blog post. Now, it’s as if they are not there. I can go into the file and see them. But when all the photos are there to choose among for inserting, they are not there . . . yet. They will be tomorrow! Now how is that better! And before, when I wanted to insert, I would have certain categories to choose among and then select from just those. Now, I have to look through the thousands of photos I have just to find the one I want. It takes forever. How is that better!

On my email, after a few warnings I get the message that my email will no longer be serviced unless I upgrade. So whether I want to or not, I have to. And, again, not everything is better.

Right now on my computer is a message to “Upgrade to High Sierra: Enjoy the latest technologies and refinements to your favorite apps.” AARRGGHH!

This method of advertising is insidious! Just a few at first. Then gradually more and more ads come at you on the computer. At first, it was along side or above or down below. You could click an ‘x’ and it was gone.

What’s most annoying are the small ads that appear at the bottom, right-hand corner. It’s a video with music and voice until you hit the mute. But the video will continue until a count-down gets from 10-1 to an ‘x,’which you can click, and it will disappear. Be a little slow, and the 10 reappears and the count-down starts all over again. These make me want to bash in my computer! I try never to buy whatever is being advertised!

One of the joys and necessities as a non-fiction writer is to be able to do research online, instead of having to make lots of phone calls and trips to the library. I do still factcheck with phone calls and actual trips (when possible) to the sights written about before publishing, but doing the initial research online saves endless time. However, some of the places I’ve researched, now have me on their mailing lists, and I get endless updates on a regular basis. 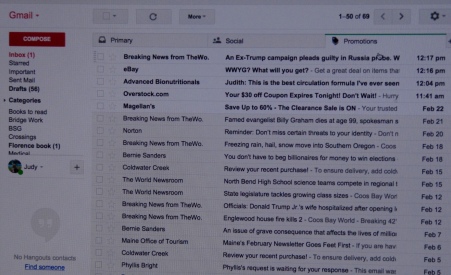 The top four arrived in a 40-minute period. Three or four times a day, I delete many emails advertising a new product or promotion.

But the research I do in my personal life generates even more emails. I went online to find out what kind of car I wanted to buy last spring, both new and used. I ended up checking out dealerships throughout the state. I also checked out car insurance companies to see how mine stacked up to the competition. I now get daily emails from dozens of companies. Some were part of my research, but some were not.

Last year, I bought a new TV here in town and did my research in Consumer Reports—not online. But I needed a TV table to set in on. Every company I checked out online is sending me info nearly every day on their latest promotions. And the same is true of catalogs whenever I order anything. And it doesn’t have to be ordered online. It happens even if I order by phone or mail. I also get emails from catalogs I’m never even ordered from.

And I get daily updates from Esmerelda who wants to tell my fortune and the Cardinals Baseball team whom I’ve never followed. I have no clue how I got on either of their lists.

Every day, I have to delete 10 or 12 emails several times a day. Very frustrating! 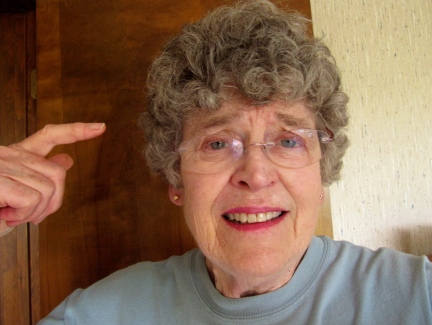 As an editor, I have a hard time not editing everything I read. But some mistakes bother me more than others. Like when certain words get mixed up with others. “Close but no cigar” as the old saying goes.

So here are the ones that make me grit my teeth:

I’ll bet you can relate with the computer upgrades and endless advertising on computers and in emails. If you have solutions, please share. In the meantime, hang in there!

Judy Fleagle spent 22 years teaching 1st and 2nd grades and 21 years as editor/staff writer with Oregon Coast and Northwest Travel magazines.Since 2009, she has written five books: "Crossings: McCullough's Coastal Bridges," "The Crossings Guide to Oregon's Coastal Spans," "Around Florence," "Devil Cat and Other Colorful Animals I Have Known," and "The Oregon Coast Guide to the UNEXPECTED!!!."
View all posts by crossingsauthor →
This entry was posted in Uncategorized and tagged advertising emails, arthritis in thumbs, bad grammar, computer ads, computer upgrades, takin off caps and lids. Bookmark the permalink.
Loading Comments...
%d bloggers like this: