Posted on January 26, 2018 by crossingsauthor

At Christmas, I almost always fly to California to be with family. I fly because the weather can be bad in the winter. It’s almost a given that I-5 will have snow or at least icy conditions going over Siskiyou Summit near the state line and that anywhere between Roseburg and Redding (more than 200 miles of the trip) can have similar conditions. And then there’s the infamous Tule fog in the San Joaquin Valley in winter and this year freezing fog in December in the Willamette Valley. 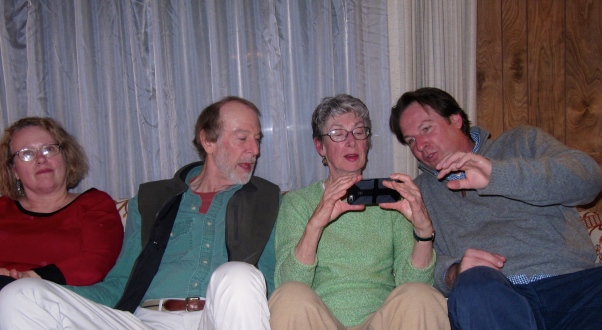 Here is my family that I visit each year––sister-in-law, brother, sister, and nephew–– all together at Christmas.  It was our first year without Mom. She passed away Oct 1, 2017, at 105 years old.

But this year, I would be driving instead of flying, I decided to take Hwy 101 instead of I-5. Hwy 101 doesn’t usually have as much traffic, the speeds are slower, and it’s more scenic. And besides my first stop was Palo Alto in the Bay Area—a straight line south from Florence.

That may have been the sensible, reasonable thing to do, but this year, it was the wrong thing to do. Going down Hwy 101 the weekend before Christmas weekend was a nightmare. Coming back on I-5 on New Year’s weekend was a dream. Who knew!

I didn’t get away as soon as I had hoped on Saturday, December 16. Instead of leaving at 9 a.m., it was 1:30 p.m. Since I don’t like to drive after dark on long trips and it gets dark early in mid-December, I only got as far as Brookings. That day had been easy driving—good weather, light traffic, no problems.

Beautiful sunset between Gold Beach and Brookings. The next day was when the nightmare drive began.

Sunday was definitely different. As soon as I left Crescent City, I hit a headland that had started sloughing off. So major roadwork was under way and only one lane of traffic available for both directions. A signal controlled traffic. This happened over and over at numerous headlands with 10- to 20-minute waits at each one

Then there was a horrendous accident, involving a semi-truck. A large tow truck was trying to maneuver it back onto the highway and took both lanes. The traffic was routed off the road onto soft dirt one car at a time. When it was my turn, I crept around a really narrow spot with the fireman urging me on. All large vehicles had been stopped before getting to this point. I really thought I was going to go over the edge to the ocean below. Scary! That slowed the trip by at least a half hour.

It was a beautiful sunny day, which also meant that the deep shadows were pitch black—no visibility when heading into them from the bright sunlight. So it was slow going all through the redwoods—beautiful but slow.

Then the scariest moment happened when I went around a curve and about 50 elk were in the road—totally blocking traffic. I skidded to a halt about 12 feet from a large bull elk with his head down and a head full of antlers ready to do battle. It was at least 20 minutes before a car could maneuver around them.

I was glad when the road turned into a four-lane freeway. As we got closer to San Francisco, though, the traffic became heavier and heavier. People must have been out enjoying the sunny day or doing their Christmas shopping. It seemed like everyone was heading back to the city.

It was gorgeous crossing the Golden Gate Bridge, but I had to keep my eyes on the traffic. It was solid and becoming dusk. There are no freeways through San Francisco—only surface streets. I know to stay in the right-hand lanes coming off the Golden Gate, because they become 19th street. That takes you through the city and sweeps you right onto Hwy 280, which goes by Palo Alto.

Teeta, my long-time friend, who lives in Palo Alto, was glad to finally see me.

Because of the heavy traffic and many traffic signals, my top speed getting through San Francisco was 8 to 10 mph. So it was totally dark by the time I got onto 280. And by the time I got to Palo Alto, I was exhausted. I had left Brookings at 7:30 a.m. and arrived in Palo Alto at 5 p.m.––about three hours longer than normal.

I left Northridge in the LA area about 9 a.m. on December 30, a Saturday morning. Once I was on the 405 freeway heading north, the traffic became heavy but for only about 12 miles. As I got closer to the Grapevine, it thinned out. The weather was fabulous, sunny in the 60s and clear. The light traffic, except for between Stockton and Sacramento, and the great weather lasted all the way to Williams north of Sacramento where I spent the night. 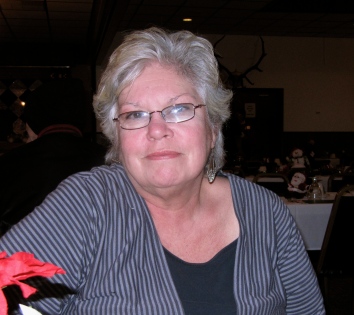 After spending Christmas with my family in Bakersfield, I headed to LA area to visit my friend, Theresa.

The next day, it was also sunny and clear with temps cooler but still mild. It was that way even from Redding to Roseburg no icy spots or snow on or along the road. The only snow was on higher mountains. And the traffic remained light. I couldn’t believe my good luck, even though I had checked the weather sites online before taking I-5. After my nightmare trip south on 101, I just didn’t want to take it back home.

When I left I-5 at Sutherland and headed over the mountains to the coast, it was still pleasant. I only hit rain when heading into Reedsport, and it was very light. I arrived in Florence about 5 p.m. just as it was getting dark. I stocked up at Freddies before heading home and was in the house with all my stuff by 7 p.m. I’m usually beat when I get home, but because the ride home had been so easy, I wasn’t even tired. Who knew!

Note: I don’t recommend traveling long distances in winter alone even with a new car, but when it seems necessary, here’s my advice. Days before leaving, check online for weather and road conditions for the route planned. I always carry food and plenty of water. And I always have my sleeping bag, plenty of blankets, and other safety items in the trunk. To ward off sleepiness, I listen to audio books and always stop for a large coffee after being on the road a couple of hours. I also stop often at rest stops and walk. I also recommend not driving after dark in winter and to keep an eye on the gas gage. Hour after hour can really eat up the gas.

Judy Fleagle spent 22 years teaching 1st and 2nd grades and 21 years as editor/staff writer with Oregon Coast and Northwest Travel magazines.Since 2009, she has written five books: "Crossings: McCullough's Coastal Bridges," "The Crossings Guide to Oregon's Coastal Spans," "Around Florence," "Devil Cat and Other Colorful Animals I Have Known," and "The Oregon Coast Guide to the UNEXPECTED!!!."
View all posts by crossingsauthor →
This entry was posted in Adventures with travel, Uncategorized and tagged winter travel. Bookmark the permalink.