Posted on February 6, 2017 by crossingsauthor

Since my name’s not John Grisham, I need to be out there selling my books to get back the cost of publishing/printing my latest book, Devil Cat, the books I bought from the publisher to sell for Around Florence, the cost of printing the fourth edition of Crossings, and the third edition of The Crossings Guide.

I’m not around for most of October and half of December, so I’m not out selling during those times. And many of the visitors to the coast who buy my books aren’t around from November through mid-March. So these are lean times. In fact, the only sales I made in January were five books at Backstreet Gallery. But there are other ways to make it through these lean months . . .

I edited a children’s book last week that was delightful. It was mostly copy editing not content editing. And later this month I will edit another children’s book. So that brings in some money. 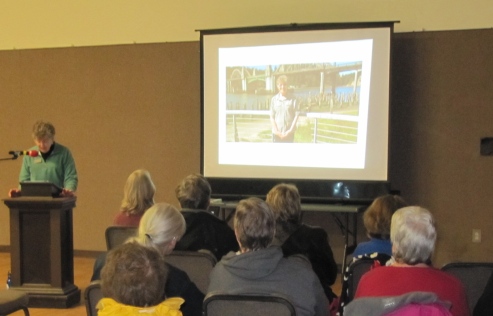 My PowerPoint presentation about the Historic Coastal Bridges in Yachats on February 4.

I’ve done many presentations—about 60––since Crossings came out in 2011. I’ve always been asked to do them, never sought them out. Other writers have asked me what I did to get them. And the best answer I can come up with is to have a book or books that people want to know about or become an expert on a topic that people want to know about. Since I’ve become known as The Bridge Lady of the Oregon Coast, I’m sort of the go-to person when folks want to know more about the bridges.

Even though I don’t usually charge to do presentations, I will often ask for money to cover gas expense. And I always ask for the opportunity to sell my books afterwards.

The other evening, February 4, I did my newly revamped Bridges presentation in Yachats. I didn’t request gas money because it isn’t that far. It was a stormy day, so my contact in Yachats offered to let me spend the night if I didn’t feel like driving back between Yachats and Florence in the dark in such weather. It is one of the more rugged sections of coast.

Because I don’t have a clicker to push, I had a human volunteer who keyed into my finger pointing  when it was time to click. There were a couple of humorous moments, but over all, it worked well.

I left early and made it there in time to get set up and still be able to greet folks and sell books beforehand. Even with the blustery weather, about 35 folks turned out for the Yachats Academy of Arts and Sciences lecture series. I was thrilled. And they were an attentive audience and asked good questions

Afterwards, I signed books that I sold and made $185. Not bad! And this talk timed out just as I thought it would and seemed to hit the right notes with the audience. After all the presentations I’ve done, I can tell if they’re staying with me or tuning out.

After the presentation, I ended up driving home. The rain had eased a bit. Because of two years of repaving, the road is smooth and lit so well with reflectors, it is almost like driving on a runway. And due to the weather, I was nearly the only car on the road. 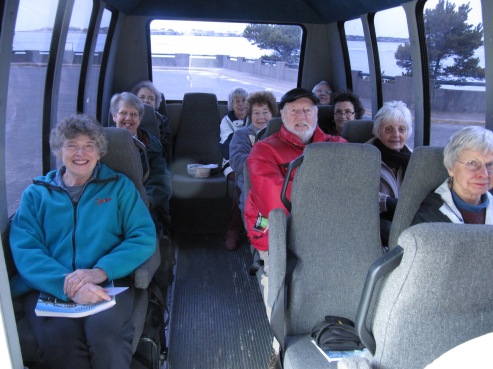 In 2013, I did a field trip through the local branch of Lane Community College to see the historic coastal bridges on a Saturday. We did 14 bridges in 8 ½ hours. It was great fun, and I’ve been willing to do it again. So when I was asked last summer, I said yes. However, the new leader of the Outward Ventures programs wanted me to divide it into two days. I did, even though it meant ten bridges on the north trip and four on the south trip. Of the large McCullough bridges, three are to the south. Most of the northern bridges are the smaller ones. 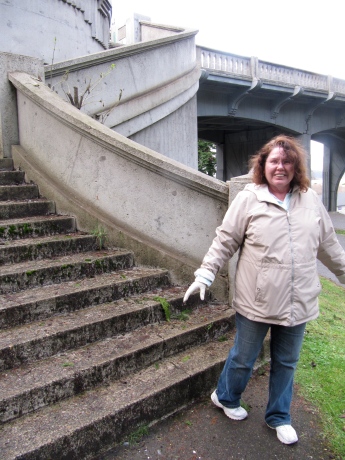 Barbara Baker, who used to be in charge of the Outward Ventures, is seen here on the field trip. This is the marvelous stairway found at three ends of the  McCullough Memorial Bridge.

The bridges are popular. The day registration opened, the northern field trip was filled by noon. And the south one filled within a couple weeks. They are planned for March. After Christmas, I was asked if I would do a second one going north because there was a long waiting list. I said I would. So for three Fridays in a row, I’ll be doing bridge field trips in a small bus that holds 14. How cool is that! I’ll be paid to chatter on and on about a subject dear to my heart. And I’ll probably sell some books to boot.

During the Florence Festival of Books, a Florence resident stopped at my table and asked me to consider doing a private tour of the bridges because she wanted to give her son and his wife a gift certificate to do just that for Christmas. She got the idea when she read about the college bridge field trips in the newspaper.

I considered it and thought that it could work, if I wasn’t the driver. I would only do it, if the folks receiving the gift certificate were responsible for the driving. So she created a gift certificate and gave me a photocopy and paid me in advance. Sometime this spring, at a time convenient to the gift certificate recipients and myself, we’ll take a private tour of the bridges.

So during the lean months, I’ve found ways to bring in some money. I’ll keep you posted on how the field trips turn out.

Notes: I’ve done the preliminary research for my new book and culled the list of places I’ll be writing about from 35 to 30. I’ll be starting the writing next.

I’m not going to the South Coast Writers Conference this year (one of the few I’ve missed during the past 20 years) because I’m one of four authors being honored at Backstreet Gallery on the same day as the main part of the conference––February 11. The Author’s Reception at Backstreet will be from 3 to 5 p.m. and coincides with the Second Saturday Art Walk in Florence. If you live close enough to come, consider this an invitation.