Posted on January 1, 2017 by crossingsauthor

“’The time has come,’ the walrus said, ‘to talk of many things. Of shoes and ships – and sealing wax. Of cabbages and kings.’” This quote from “The Walrus and the Carpenter” by Lewis Carroll, sums up exactly the hodge-podge of topics I will touch on this first day of 2017.

I left on December 17 when Eugene was still in the grip of the ice storm of the 14th. Everything was encased in a thick coating of ice––every leaf, every twig. And everything was decorated with icicles, including the cars in Long-term Parking. They looked like they were decorated for the holidays. With the temps just above freezing and the sun shining, it was beautiful but sad because nearly every tree was damaged or ruined. The main roads were easily passible but the secondary roads were still a mess with trees and branches down and lines too.

For the first time since 2012, I got away and returned pretty much according to schedule. There were delays, but one or two-hours, not one or two days.

Flying in and out of San Francisco and Bakersfield was easy, but returning to Eugene in heavy ground fog was SCARY! The first sighting of the ground was the runway and immediately feeling the wheels hit. The pilots were flying blind with total faith in radar.

It was a wonderful visit with family. Highlights were my sister and long-time friend greeting me at the Bakersfield airport when I landed at a little after midnight. My sister held a sign with FLEAGLE written like tour group guides do. It was hilarious. Putting up the Christmas tree with Mom handing us ornaments. Opening presents around the tree on Christmas morning. Christmas dinner of Cornish game hens with many side dishes for eight people and everything turning out good.

My new painting. I love it!

As I’ve mentioned before, joining Backstreet Gallery has been a good move for me. To celebrate, I’m buying two paintings by two members. One is already in my kitchen, Punk Rock Duck, by Claudia Ignatieff of a hooded merganser. I fell in love with it when I first saw it. The other is a scene of ocean waves and rocks by John Leasure and again I saw it and wanted it. Both paintings are original oils. But I waited, to see if I continued to want them, to be able to afford them, and to determine where I wanted to put them. 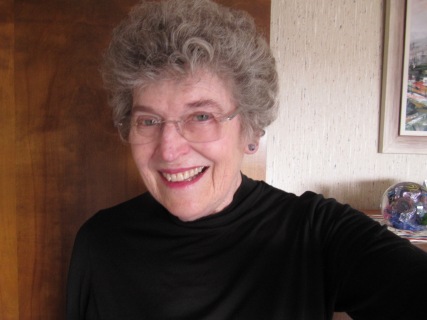 My new, new glasses are gray on the sides, slightly different shape, and blend in with my hair. More importantly, they have a stronger prescription. Most people won’t even notice a change.

I bought new glasses this past fall, but they made me feel like I was wearing someone else’s. And one eye would close of its own accord after driving or reading for a period of time when wearing them. So I went back to the optometrist and she reexamined my eyes and found that one eye was seeing double. So the lens for that eye was reworked. I picked up the new, new pair of glasses yesterday. They are wonderful! No problems! I am so relieved.

It’s the mid-size pieces that enable a fire to keep burning.

We are expecting a week of very cold weather. When that happens, I need to burn wood to keep the upstairs warm. But my woodpile has been picked through to where only pieces too large to fit in my stove were left. So I hired a fellow just before I headed south to split those last 50 or 60 pieces. He did so, and it’s wonderful to have wood that I don’t have to struggle with. Now it’s easy to build a fire and keep it going.

Last year in January, I sorted through all the files in my office for the first time in about 20 years and threw out tons of stuff. Yesterday and today, I sorted through my clothes for the  first time in years. Some were old and worn enough to toss, but many pants and tops that I never wear were perfectly wearable and are now in bags that I will drop off at the Humane Society thrift store. And I found stuff to wear that I liked and didn’t remember I had. It’ll be just like Christmas––an extended Christmas!

This book,  from my nephew and his wife for Christmas, will help in some of my research of the unexpected on the Oregon Coast.

Approximately twelve weeks will lapse before my next trip south. During this time, I hope to do the research and writing for my next book about the unexpected on the Oregon Coast. I work best with a deadline and a schedule. I plan to put the schedule together tomorrow, and to get started later in the week.

And I want to add walking to my routine to help my leg. I plan to continue two times a week at the gym and to add walking on the days I don’t work out. Maybe I’ll lose the pounds that I put on over the holidays too.

Happy New Year! I hope 2017 turns out to be a really good year for you.