Posted on December 17, 2016 by crossingsauthor

This year is the first time ever, I didn’t put up a Christmas tree and decorate it. I didn’t decorate the house either. Now that it’s getting closer to Christmas, I’m beginning to feel like a Grinch. 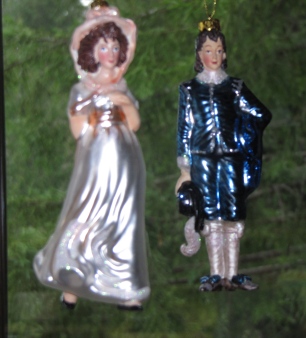 Here are Blue Boy and Pinky, two new ornaments given to me by Theresa as a souvenir of our trip to museum where their paintings are hung.

To make it worse, the only items I collect are ornaments, and the only time I see them is when I have a Christmas tree. I really enjoy looking at each one before placing it on the tree and remembering who gave it to me or where I was when I bought it. To make it even worse this year, two friends gave me ornaments and I bought two ornaments on the trip that I took with my sister in June. So I was really looking forward to putting up a tree this year and placing each of my new ornaments. Oh well!

I always do my decorating the weekend after Thanksgiving and spend a few days putting up the tree and decorating the house. Of course, it only takes a day to place my ornaments on the tree. But it takes several days to reposition them over and over until they are just right. It’s crazy, but every year.I turn into a Christmas tree perfectionist.

So why didn’t I decorate this year. Two reasons: I had left a bunch of large chores that I needed to get done, and these days, everything takes more time than it used to. The second reason is that I moved three pieces of redwood furniture into my dining room so I could keep them dry before, during, and after I painted them. They badly needed work. So my dining room—totally visible from my living room half a story below, had this super crowded look and it just didn’t make sense to decorate one part of the house and turn another into a workshop.

I painted these two in the kitchen under the watchful eye of Sir Groucho.

And every year, I’m gone for two weeks around Christmas. Most people think I’m crazy for even decorating at all since I won’t even be home. Those folks will think I finally wised up.

Besides painting the redwood chairs and table after I got back from California at the end of October, I washed all the windows because I had put it off for months.

I also planned on doing a lot of clean-up work in the yard, and I got some done.

An unplanned project was cleaning out the entire basement, which involved a couple of trips to the dump. I needed to clean it out so an electrician could walk from one end to the other in order to wire the corners of the house for motion sensor lights in the backyard.

I also had not cleaned out the greenhouse. So I had to put on my version of a Hazmat suit. A shower cap covered my hair, a mask covered my mouth and nose, and the rest of me was covered in several layers since it was cold. I looked totally bizarre, but it was necessary. I meant to get everything cleaned out in early October before heading to California, but didn’t get to it. So by this time of year, my greenhouse on the north side of the house is filled with tomato and pepper plants totally covered with a gray coating of mold. Just touching them fills the air with spores that I don’t want to breath in. After getting the plants out, I took out most of the gardening stuff and carried it to the newly cleaned out basement.

A project I needed to finish by Christmas has been awaiting my attention since the end of June when my sister and I returned from our trip. I got started when I was in California in October. I wrote up all my notes from the trip. About the second week after getting home, I spent the entire week editing and adding many, many photos to the manuscript. Then I ran off two copies and created covers. When I finished, the two manuscripts were about a half-inch thick. I took them to Shipping Shack and had them stapled. Now I have a book to share with my sister—Judy and Edna’s Really Big Trip or How Two Sisters Ate Their Way Through Port Townsend, Seattle, Victoria and Friday Harbor. 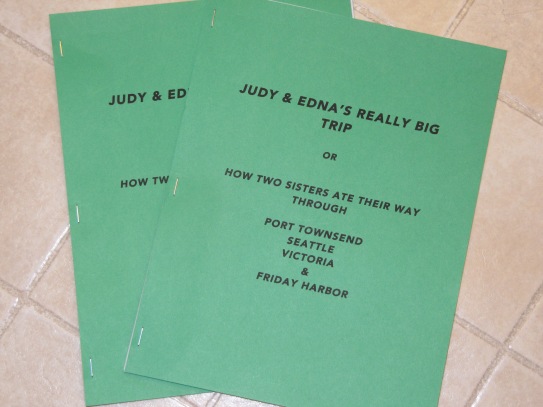 These will help us remember our fabulous trip!

I spent the better part of another week doing my Christmas letter and Christmas cards and getting them mailed or delivered. This past weekend I spent some time making fudge and baking chocolate chip cookies. Then I divided everything up and placed these goodies into several Christmas gift bags. Then this week I delivered them, which involved some wonderful visits.

Last week was my Backstreet Gallery week. I put in my three days of being the clerk on duty, went to the once a month general meeting, attended a Christmas party, and attended the Second Saturday Art Walk and reception. I also attended another reception on Sunday at the events center. Those of us there from Backstreet posed for a photo with Santa.

And I attended some Black Friday sales and did more Christmas shopping between other activities and got presents wrapped and sent. So I wasn’t a total Grinch.

I plan to fly to California later today and the temps are the lowest they have been all year. Once again, I’ve picked one of the worst days to try to get to Eugene. I hope I can drive over this afternoon. The roads are icy this morning; I hope they will be melted by the time I leave about 2 p.m. Wish me luck!

And I wish all of you a very Merry Christmas and a Happy New Year!