Posted on September 18, 2016 by crossingsauthor

I came up with Positivity last night just before falling asleep and wondered if it was actually a word. Then before I was even out of bed this morning, I heard it on NPR’s Weekend Edition with Scott Simon. It wasn’t Scott, but someone else who used it. So I took it as a sign. If it could be used there, I could use it here.

The last few days were filled with positive situations that I wanted to share. A week ago, I was really upset with some aspects of how things were going for the Florence Festival of Books (FFOB). I even sent an email to a friend filled with whining and venting. Today I feel just the opposite.

The last two weeks have been filled with meetings, writing articles, and getting flyers out regarding the FFOB. And my activities with Backstreet Gallery were equally busy during this time.

So when you’re feeling overwhelmed, tired, and living on few hours a sleep each night as I was, whining comes easily. But now that the busy period is past, I can look back and see the positive—expecially this past week.

The NW Boomer & Senior News September edition had an article about the FFOB as well as basic info in their calendar. It was even featured on the bottom of the front page. I wrote and sent in the article and calendar info a month ago. The managing editor said that they probably wouldn’t have room for the article, but the calendar info would run for sure. I saw a copy earlier this week, and was thrilled that the article made it.

The September 14 Wednesday copy of the newspaper with the story about the upcoming FFOB.

The Siuslaw News had wonderful coverage of the Florence Festival of Books in Center Stage the first week of September and in the Wednesday paper this past week. I contributed some of the text for both. Again, I was thrilled to see them.

Then tomorrow, Sunday, September 19, in the Eugene Register-Guard in the Oregon Life section will be a piece I did that tells about the event and then has at least a line—sometimes two, occasionally three—about each of the 90 participants. This article took a lot of time and several phone calls/emails to gather info. The editor, emailed me yesterday to say that “the story worked out well.” I was so relieved and pleased. I don’t subscribe to the RG, but I will be buying a copy of this issue.

This next week on Wednesday, the insert in the Siuslaw News will be about 20 pages and totally devoted to the FFOB. I contributed three articles and edit for three other items as well as photos for the cover. That kept me busy last week. Much of the insert will consist of ads from FFOB participants. I’ll have a half-page ad like I had last year. This year, I upgraded to color. So I’m looking forward to seeing the insert. It will also be the program during the day of the event. The centerfold will have a table layout with a list of who sits where for all 90 participants.

KXCR Florence: Connie Bradley, Meg Spencer, Jennifer Conner, and I were interviewed about the FFOB. It is our understanding that this interview, which lasted about 25 minutes will run more than once before our event. It will probably be cut down to a shorter time.

KCST Florence: I rewrote scripts from past years to reflect this year’s FFOB and went in a week ago to record both of them. I’ve done this most year’s since 2011 when we had the first FFOB. These are 30-second spots and will run numerous times. The first year, I had to record numerous times and had to add edit because I didn’t realize for a 30-second spot, you need to record a little longer to account for the removal of all the pauses to take a breath. I was there more than an hour. So this time after I redid both of them and before going to the radio station, I practiced and pruned down to 40 seconds. When I went in to record, Calista met me. I recorded each one once, and she worked her magic and got them to 30 seconds. We were done in 20 minutes. I felt good about how they turned out, and so did Calista. Her parting words, “Same time, next year!”

KNPT Newport: I was on Pet Improvement with Jane Laulis on Friday, September 16. It runs every Friday from 8:30 until 9 a.m. I was the featured guest mainly because of my book, Devil Cat and Other Colorful Animals I Have Known. I had the opportunity to talk about this book, my bridge books, and the FFOB coming up in a week. It is supposed to be available as a podcast for a week. Check out http://www.knptam.com. If you click on the podcast for Pet Improvement and then click on the paw print in the sand, you should get it. I haven’t heard it yet, but Jane was really happy with how it went and bought a copy of Devil Cat. How could I not feel good!

About a month ago, I made a trip south to Bandon and north to Newport, to deliver books and to distribute flyers about FFOB. We only had a total of 150 printed because we didn’t have the sponsors set yet. So I dropped off only a few at each stop.

A week ago today, I picked up 12 large posters, 300 smaller ones, and 1,000 double-sided flyers. I then counted and banded 35 sets of flyers, wrote a cover letter and ran off 35 copies, and addressed 35 envelopes. Then I stuffed those envelopes. These went to libraries and bookstores on the north and south coasts, Eugene and other towns in the Willamette Valley, and Southern Oregon.

On Monday I mailed them before heading south. I dropped off flyers and envelopes for committee member Ellen Traylor to distribute in Gardiner and Reedsport. Then I made stops at chambers/info centers, libraries, and bookstores in North Bend, Coos Bay, and Bandon. I also delivered some books in Bandon.

Every single venue was very pleased to receive the materials and declared that they wanted to come and would tell a friend or niece or neighbor about the event.

And some really amazing things happened. When I stopped in Coos Bay, the gal on duty said that the large poster holders near the windows were usually reserved for Bay Area activities. So they wouldn’t need any large ones. But when she discovered that Phillip Margolin, her absolute favorite author, would be our keynote speaker, she changed her tune, “Of course, we’ll display your large poster!” And I helped her put it up.

And when I got to Bandon, there was a major bike event going on, Cycle Oregon, which caused the road to the library to be closed. So I was rerouted, got lost, and ended up on the south of Bandon road that goes by Lord Bennett’s restaurant. I had delivered flyers and posters to the nearby Table Rock Motel before. So I stopped, and they were glad to display them again. In fact, when I told the gal at the desk, that I couldn’t get to the library because of all the cyclists camping in the park in that area, she said that the library was closed that day anyway. She also said that since she lived almost next door to the library, she would deliver posters and flyers there the next day. So I gave her some of each. Who knew! 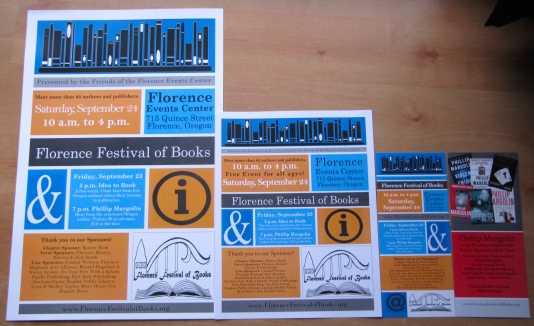 Our large and small posters and the double-sided flyers.

The next opportunity to distribute came on Thursday after putting in my shift at Backstreet Gallery, which is located in Old Town. I walked down one side of Bay Street and delivered posters and flyers to just about every business. And everyone was very supportive. So from BJ’s Ice Cream to Waterfront Depot, expect to see posters about the FFOB. It took two hours, but I came home floating on air because of all the positive comments about the festival!

And another amazing thing happened. As I was chatting with the gal at Old Town Coffee Roasters, while delivering posters and flyers, a gal waiting behind me asked if she could have some for the libraries in North Bend and Coos Bay. I had delivered some to the North Bend library, but ran out of time and didn’t make it to the Coos Bay Library. I felt bad about that, so I was really happy to get stuff to them after all.

Connie Bradley is covering the rest of Florence, especially the motels.

On Friday, yesterday, I got up at 4 a.m. to be able to leave before 7 a.m. to get to the radio station by 8 a.m. That was a very positive experience, and it was only a few minutes after 9 a.m. when I was ready to leave.

So I headed to Lincoln City, since nothing opens until 10 a.m. I arrived at Bob’s Beach Books at 10 sharp. I delivered posters and flyers and stopped at numerous places between Lincoln City and Florence on my way back. Every place ended up in a discussion about the festival or Margolin or both. And in some places I gave extra flyers to folks nearby who were listening and wanted some. I also stopped at a few lodgings like the Sylvia Beach in Newport and the Adobe in Yachats. Every single experience all day was positive. And I sold 11 books—all unexpected. I felt tired but really good.

The FFOB kicks off next Friday, with a panel discussion between five authors discussing their individual paths from idea to book from 3 to 4:30 p.m. at the FEC. The participants are Janet Wellington, eBook romance author; Ned Hickson, nationally syndicated humor columnist for the Siuslaw News; Byron Dudley, Eugene poet and author of 12 books; Duana Welch, Ph.D., Eugene resident who provides relationship advice on blog LoveScience where she puts the science in romance, and Tom Cherones, award-winning TV director of “Seinfeld” and other TV programs and author of a parody, The Hardly Boys.

Of course, that evening at 7 p.m. is the Keynote Speaker, Phillip Margolin. I think he is a terrific writer and have read five of his 19 books––most of which have been on the New York Times bestseller list. He is a former criminal defense attorney who has been writing full-time since 1996. So crime thrillers are his genre. I’ve heard him speak, and I’m so pleased we were able to entice him to our event. He is Oregon’s John Grisham.

I as well as other committee members and volunteers will be wearing either this T-shirt or blue aprons with the festival logo on Saturday.

So I think we’re ready for next week. And that makes me feel good. Positivity—that’s what it’s been all about all week!