Because spring break brings hordes of tourists to the Oregon coast, the selling season has begun. So I hit the road north. And this is what I saw: more traffic, more motorhomes, and more out-of-state license plates. California and Washington were well represented with a few from Idaho. Also seen were Utah, Texas, Colorado, and Arizona as well as a couple from both British Columbia and Alberta. I also saw at least five I didn’t recognize and couldn’t read the state names. I don’t usually gawk at licenses, but I spent several minutes stopped due to roadwork again and again. One spot was along the Sea Lion Caves parking lot. I saw only one license from Oregon. It was spring break for most Oregon schools last week and most out-of-state schools this week.

With all the rain we’ve had including this past week, the days of sunshine and warm temps this week is absolutely, incredibly glorious. Everywhere I stopped, it was the main topic of discussion. “Is that really sun?” “No rain all morning.” “Can you believe it?”

I made the mistake of saying, “And there’s not even any wind about 11:45 a.m.” I should’ve known better. By 12:15 a.m., the wind started up and became stronger as the day progressed. I was reminded of that old saying, “It’s not nice to mess with Mother Nature!” It is a summer pattern that when the sun comes out, the wind comes up, and the closer to the beach, the stronger the wind. The view wasn’t bothered by the wind, and the trip to Newport and back was gorgeous.

The view from the south access road south of Yachats.

There was a lot of roadwork. But the biggest project is taking place between Sea Lion Caves and Cape Creek Bridge where the stone wall is being rebuilt. This was part of the rockwork done during the Depression as part of the New Deal. It was beautiful before but no longer met safety standards. So it’s being rebuilt higher. And the old stones are being reused as the top course, which is why this new wall already has moss growing on it. The process is slow and painstaking but the results are impressive and will make a nice addition to one of the most scenic sections of the coast.

Before hitting the road, I made calls ahead of time as I usually do. Some venues didn’t need books, and they told me to contact them in May when I said I’d be back.

The door is always open and welcoming at Mari’s in Yachats.

Mari’s in Yachats needed some. Mary and Mari know my spiel as well as I do and sell a lot of my books. 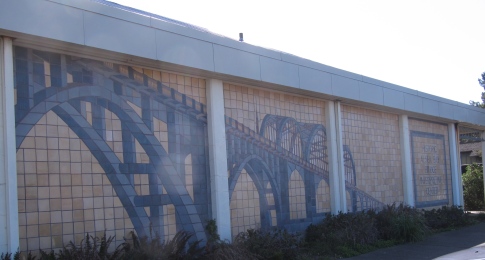 I also dropped off some to Mary Davis at the Historic Alsea Bay Bridge Interpretive Center at the southern end of the new Alsea Bay Bridge. My books sell well there, and they should. The Center is like a museum to the coast bridges and McCullough. 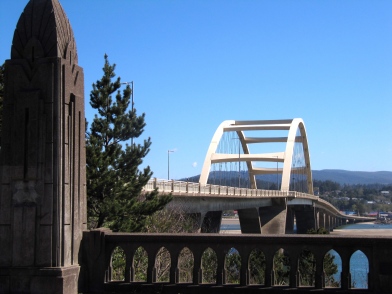 The new bridge as seen from the wayside just north of the bridge. This wayside has some of the entry pylons and railings from the old bridge .

You can see how the Yaquina Head Interpretive Center is tucked into an old quarry site.

The lighthouse is out on the point. It was refurbished not too long ago and still looks great. This tallest of the coastal lighthouses hosts tours in the spring and summer every day except Wednesday and Thursday on the hour between noon and 3 p.m. 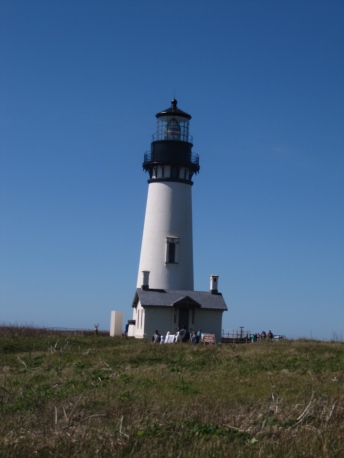 The Yaquina Head Lighthouse looks terrific and has tours during the spring and summer.

During spring break sales have picked up at the Backstreet Gallery. In the month of March, sales of my books have brought in as much money as January and February combined. And when I was on duty yesterday, I sold four books.

This morning, I dropped off a dozen books at Books ‘N’ Bears. With a location right across from the Siuslaw River Bridge, Susan does a great job of selling the bridge books.

Besides the beautiful weather, there are signs of spring everywhere. The rhodies are beginning to bloom, the deciduous trees and shrubs are turning green, bees are buzzing around blossoms, and folks are working in their yards. We’re lovin’ it; it’s been a long, wet winter.

Spring and the selling season are about to burst into full bloom!