Posted on January 11, 2016 by crossingsauthor

It’s a given that travel at the holidays is crowded and more stressful than normal. But it’s the time of year when I fly to California to see family rather than drive due to the winter weather.

It’s also a given that I have problems whenever I go through San Francisco, but unless I want to drive to Portland to get a flight or fly to LA and find a way to my final destination Bakersfield, it’s the most convenient with only one stop. There are always, always, always, delays. Here are some of the most memorable.

In 2005, a year when the Oregon Ducks went to the Holiday Bowl on December 29, the pilot of our plane from SFO to Eugene was delayed due to a traffic accident––not his, but he was caught in the back up. Since it was the day after the game, those of us heading for Eugene were mostly Duck fans heading home. And as we waited, some passengers became impatient and more than a bit rowdy. They started accosting any pilot or co-pilot moving along the crowded concourse, “Hey! Over Here! You look like a pilot. We need one!” Finally, our pilot showed up. The news was greeted with loud cheers. No doubt about it, this was a football crowd.

The rest of the family–Jayne (Harry’s wife), Harry, and Edna waiting to open . . .

In 2011, it wasn’t Christmas; it was Presidents’ Day weekend. I was heading to San Diego to meet a friend for a cruise along the Mexican Riviera. I had just finished Crossings and was in need of a break after working on it for a year all day, every day. The flight from Eugene made it to SFO on time, and we boarded the plane on time. Then we were taken off the plane and returned to the waiting area. Evidently, two years earlier, United was told by the FAA that they had two years to replace a part on that particular model of plane, and they had not. On that day at 2 p.m., the FAA grounded all those planes until the part was replaced. Fortunately, I wasn’t being picked up for my cruise until the next day.

Our pilot was waiting along with us and provided updates. At first, he told us that there were nine planes affected, we were number six in line, and it took about a half hour to install the part. And that they were waiting for the parts to arrive. When he went to the food court to eat, all of us tagged along. We weren’t letting him out of our sight. He let us know when the parts arrived and when they got it down to 15 minutes to install. All in all, we were delayed four hours.

In 2013, when heading home from Bakersfield a few days after Christmas, I got up at 3 a.m. and my sister picked me up at 4 a.m. for a 5:30 a.m. flight that actually left on time. About Monterey, the pilot started circling and announced that due to fog on the runways in San Francisco, we would be landing in San Jose. We ended up being one of about 50 planes to divert to San Jose, and after a couple of hours of waiting for the fog to lift and eating one tiny packet of saltines, we were unloaded in the terminal to await buses to SFO. By now it was about 11 a.m., and I was getting hungry. We were advised to stay together and be ready to board our bus. Then we were herded outside to wait for it.

When we got to SFO in the early afternoon, we found ourselves in lines to find another flight home––all thousand or so of us. It was a couple of hours before I got to a ticket agent. I really got to know those around me in line. Once at the counter, I found that I had missed my flight for that day and since I was flying to North Bend, which has only one flight a day, the next day’s flight was filled. So I was booked for the next day’s flight. By then, it was 3 p.m. and I was starved. I headed to a food court and got something to eat. Then I looked at the vouchers that would only guarantee a reservation at one of three hotels if I called right away. The cost would not be covered.

This terminal (one of two) for United is a busy place with hundreds of flights a day.

So I called my college roommate, Teeta, who lives in nearby Palo Alto and left a message. About an hour later, when I was trying to decide which of the hotels to call, she got back to me. She picked me up at 5 p.m., and we had a wonderful and totally unexpected visit. I usually see her each year on one of my road trips to California––this was a first to see her flying down. When she got me back to the airport two days later, I got home without further incident.

Last April, was not a holiday, but I flew to Bakersfield because it had only been five weeks since ending chemo and I wasn’t up to driving yet. I also wasn’t up to walking long concourses with a carry-on. So I requested a transport chair to get me through each airport. I had a 1 ½-hour layover on the trip down and a two-hour layover in San Francisco on the trip back.

Because of fog in SFO on the way down, the flight was delayed two hours. That would have stranded me in S.F. But because there was a boy of about 12 traveling alone also going to Bakersfield on the flight, I was in luck. The connecting flight was delayed to wait for us because of the boy. And our arrival gate was changed to be closer to the connecting flight. The attendant had the two of us get off first, and I was met with a transport chair. Airport personnel ran while pushing me to the waiting plane with the boy running along behind followed by someone else carrying our checked luggage. It was amazing! Airlines don’t mind stranding adults, but not children traveling alone. On the trip back, the plane was 1 ½ hours late, but with the two-hour layover, I made it. I was pushed along the concourse in the transport chair and got there just as the plane was starting to board. Whew!

That brings us to this Christmas. I left home headed for Eugene on December 21 and had added an extra two hours for the weather. It was wicked—up to 80 mph wind gusts in the Florence area and up to 60 mph gusts in the Eugene area with heavy rain. When I checked the road to Eugene the evening before, it was open, but that morning at high tide, it was closed due to flooding for a few hours at Cushman just east of Florence. So I headed for Reedsport and Highway 38. That route is a three-hour trip to the airport instead of 1 hour and 15 minutes from Florence. To add to the fun, just south of Florence, a large tree was down. All traffic had to wait for a crew to arrive, saw it up, and remove it. That took 30 minutes. The ride was a slow go with small slides to avoid and buffeting winds and almost blinding rain all the way. After all that, when I got to the airport, my flight had been cancelled due to strong winds in San Francisco. AARRGGHH! 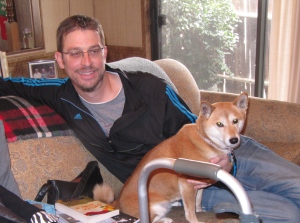 After waiting in line to get rebooked for a flight the next day, I called a friend in town and eventually got hold of her and spent the night at her place. I always carry a sleeping bag in my trunk, so it came in handy in her studio apartment. The next day, the weather was still rainy, but less fierce. The flight was delayed, but I had a three-hour layover this time. When I got to SFO, my flight to Bakersfield was also delayed. Several flights were delayed, further delayed, and cancelled. Our flight was delayed, further delayed, and finally took off two hours late. I felt lucky to finally get to Bakersfield.

It was a wonderful Christmas, and I got to see all my relatives, and so did Mom. That’s important when you’re 103 ½.

On January 4, it was time to return home. My sister took me to the airport and stayed through my security check. The plane to SFO was delayed again and again due to rainy weather there. Finally, it was delayed to the point that I would miss my connecting flight. The rest of the flights through SFO were full for the day, and since the agent felt I would have the same problems the next day through SFO, he booked me through Denver the next day. Who’d a thunk it! I would have to be at the airport at 4:30 a.m. Yuck!

So I called Carole one of the folks taking care of Groucho and let her know. She informed me that it was icy in Eugene with everything shut down and Hwy 126 to Florence closed due to icy conditions and a big mudslide. So back to the ticket agent. This time I was booked on January 6 through SFO at 6:46 a.m. I called my sister. She picked me up, and we had two more days of family visit. Then on January 6, I flew to SFO on an on-time flight. Of course, it was delayed in San Francisco for a couple of hours, but that was okay. I got to Eugene in the afternoon and the temps were above freezing and no rain. But I didn’t breathe easy until I drove through Cushman on dry pavement. I was so glad to be back!

I can hardly wait to see what will happen next year when I’ll fly during the holidays once again. If there was a reasonable alternative, I’d take it. Oh! I forgot to mention that for all this fun and excitement, it only costs $653 to fly from Eugene to Bakersfield during the holidays. You can go almost anywhere else cheaper!

Judy Fleagle spent 22 years teaching 1st and 2nd grades and 21 years as editor/staff writer with Oregon Coast and Northwest Travel magazines.Since 2009, she has written five books: "Crossings: McCullough's Coastal Bridges," "The Crossings Guide to Oregon's Coastal Spans," "Around Florence," "Devil Cat and Other Colorful Animals I Have Known," and "The Oregon Coast Guide to the UNEXPECTED!!!."
View all posts by crossingsauthor →
This entry was posted in Uncategorized and tagged airport delays, Bakersfield, Eugene, flying during holidays, San Francisco, SFO. Bookmark the permalink.
Loading Comments...
Comment
×
<span>%d</span> bloggers like this: