Posted on November 13, 2015 by crossingsauthor

It’s been just over a year since I started chemo, and I can say that I’m totally back–– hair, weight, and now energy too. My 26-day California trip was a real test of my energy. 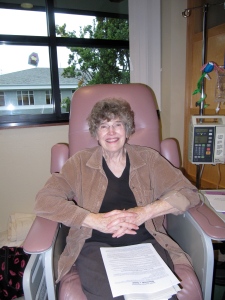 I planned to leave at 8:30 a.m. on October 13, but didn’t get away until 11 a.m. I started out 2 ½ hours late, but with no worries . . . until I started feeling some shimmying once I got on I-5 and over 60 mph. I kept my speed under 60 and just before Wolf Creek off ramp between Roseburg and Grants Pass, I suddenly heard loud noises that kept getting louder. At first I thought it was a truck on my tail. When that wasn’t the case, I thought it was my engine, so I pulled off the road and pulled over at the first turnout. When I stepped out of the car, I immediately smelled and saw that my front passenger tire had blown and was smoking. My first thought––thank God it’s not my engine.

I had turned off on old 99 and was right across from Creekside RV Park. I called AAA, and I was able to wait inside the park’s office, which was cooler than the high 80s outside. After an hour and a half, the wrecker arrived from Grants Pass, and the AAA guy got right to work. While I unloaded the trunk––wrapped Christmas presents, gardening tools for working in Mom’s yard, cooking pot and knives for working in her kitchen, a piece of furniture for my sister, clothes bags, boxes of shoes, and a pair of boots plus the stuff that is usually in my trunk like a pop-up chair, sleeping bag, battery cables, and kitty litter for slippery conditions––he got the blown tire off. Just as I finished unloading the trunk, he was ready for my full-sized spare. So we swapped tires. As he put the spare on, I reloaded the trunk and finished just as he did. He said that I must have picked up something that caused a leak that eventually blew out. Thankfully, the rim wasn’t damaged.

After my two-hour delay, I continued down the road. I made it halfway between Redding and Red Bluff before stopping at a motel about 8 p.m. I don’t like freeway driving after dark, but the weather was great and I wanted to get as far down the road as I could. I would be going as far as LA the next day.

I got up early and was back on the road by 7 a.m. I stopped at Corning at Les Schwab and got two new tires for the front. The other old front tire became the new spare. I don’t like driving with no spare. I continued on about 9 a.m. and stopped at most rest stops to walk and to eat from my packed lunches. The weather was ideal. I was heading for Northridge on the northern edge of the LA area. Even though it turned dark while going over the ridge route and I had never been to Northridge before and took the wrong turnoff, I eventually found where I was heading by 7 p.m. I had been on the road for 11 hours and that was the longest for me as the driver. 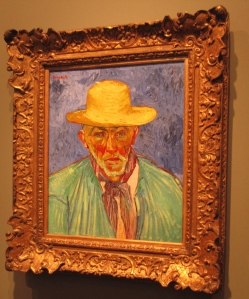 I recognized Portrait of a Peasant immediately as a Van Gogh––one of my favorite artists.

I had a wonderful visit with my friend Theresa. A highlight was seeing the Norton Simon Museum of Art in Pasadena. Wow! Every single piece of art is by a familiar and famous name––Picasso, Rembrandt, Van Gogh, Monet, etc. What a fabulous experience! 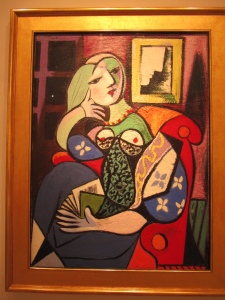 I could tell this was Picasso and discovered that it’s called Woman with a Book.

Then I headed back over the ridge route on I-5 on Saturday—no problems. Although, on the two days between my trips over and back, the road had been covered in several feet of mud in flash floods on the section referred to as the Grapevine on the northern end and had been closed mid-Thursday until Friday evening. When it reopened, the traffic was horrendous. I had sailed over it on Wednesday and again on Saturday with no problems. Talk about timing! Talk about close calls! When I planned my trip, I had no clue. I could see the stripped bare hillsides on the Grapevine section and could see where the mud had encroached across the road. There was about a quarter-mile section with no lane markings. With about five or six lanes in each direction, that was a bit scary, but it lasted only seconds. 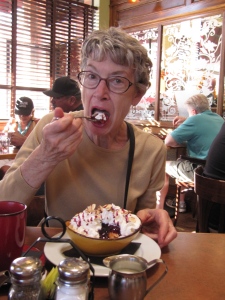 We had tea and scrumptious goodies at Linn’s in Cambria. Edna’s loving every bite.

I met my sister, Edna, in Bakersfield. After a brief lunch, and unloading some of my stuff and loading her suitcase, we headed in my car to Cambria on the central California coast. It had been very hot for months in Bakersfield, and the cooler coastal weather was heaven to Edna. It was an easy drive over. (Isn’t anything after the traffic of LA and I-5?) We didn’t tell my mom about this trip. When I come down, she wants me to stay with her and spend all my time there once I get to Bakersfield. So this was our secret getaway. 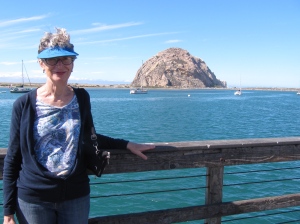 Edna with Morro Rock in the background. This is just a few feet from where we had a great seafood lunch.

Cambria is a tourist town filled with delightful shops and fabulous restaurants. We spent two days browsing, doing some Christmas shopping, and eating fabulous meals. It was wonderful! My sister is a collector of succulents, so we stopped at nurseries in Cambria and in Morro Bay too before heading home. She found several new varieties to add to her collection.

I spent two and a half weeks at my mom’s house and became caregiver, housekeeper, cook, and gardener. Each evening we had anywhere from three to six for dinner. Edna helped me with the cooking most nights and together we tackled the roses. My mom has the most beautiful roses on her bushes, but they need care and she isn’t able to handle it. 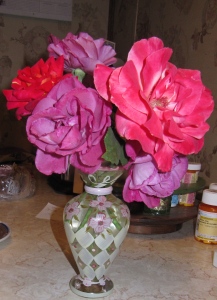 Bouquets of roses from her own patch of roses brightens my mom’s day. 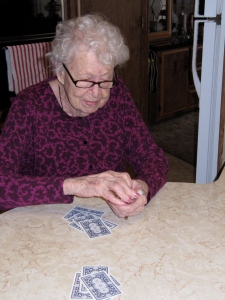 My mom, who turned 103 this past summer, still beats me sometimes when I play her in gin rummy.

Most afternoons, I played gin rummy with Mom and she won some games every day and some days won more than me. I spent a lot of time grocery shopping, but I also found a good shoe repair shop, which we don’t have in Florence. Three pairs of my shoes are now wearable once again 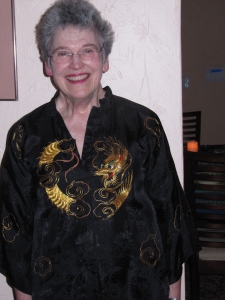 Here I am in my mom’s Chinese silk pajamas that  dad gave her about 78 years ago as my Halloween costume.

My sister had a Halloween party at her house where we dressed in costumes and had some of her friends over. That was great fun. We also went out to dinner to celebrate my birthday, which is in early November. So all in all, it was a great family visit.

Edna became a Laker’s basketball player for the Halloween party.

On my way home, I stopped to see a long-time friend, Rosemary, in Discovery Bay, about a half hour west of Stockton in the delta area. She moved there about the same time I moved up to Oregon—30 years ago. I’ve been visiting her about once a year ever since. We’ve been friends since 7th grade and are exactly the same age since our birthdays are on the same day. We had a great visit.

Then I headed home, planning to stay overnight somewhere about Yreka just before the Oregon state line. I stopped at numerous rest stops to walk and to eat and didn’t get sleepy, and the weather was ideal. So I didn’t stop. I kept going over the mountains into Oregon.

The only problem was that it got dark by Ashland and started to rain by Grants Pass. It was heavy-duty rain over the four summits between Grants Pass and Canyonville, but slacked off until I turned off and headed over the Coast Range between Sutherlin and Reedsport. I stopped and took a break in Sutherlin and called my mom. Once I got into the coastal mountains, it was rainy again. With hardly any traffic, though, the rain wasn’t so bad. I got home on November 7, at 10:15 p.m. after 13 hours on the road. That was a new record, and I was tired.

I was glad to be home and Sir Groucho was VERY HAPPY to see me. Almost a week later, he still is. 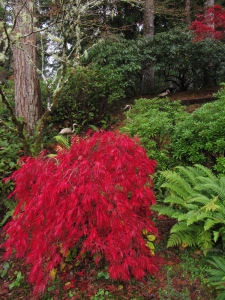 My split leaf maple turned a beautiful crimson while I was gone. I will enjoy it every day while it lasts.

Bottom line: Because I was able to handle the long periods of driving, all the walking with my sister, and the busy time while at my mom’s, I think I can safely say that I’ve totally recuperated from my cancer and chemo. Just days after getting home, I met with my oncologist on November 10, and he said my lab tests of the day before had only good numbers. So, look out world, no keeping me down now!