I know! I know! What did I expect in July when it’s sizzling in the valley! Even so, I haven’t been in such crowds since I was at the newly reopened Sistine Chapel in Rome.

Every place wasn’t that crowded, but if you don’t like big crowds, avoid Lincoln City, tourist hotspots in Tillamook, and downtowns of Manzanita, Cannon Beach, and Seaside this summer.

Since I had called ahead, every place I stopped was expecting me. I didn’t get too specific on time of arrival—morning or afternoon and which day. You know, like the TV repairman coming to your home. Except I did have to be at the Tillamook Library between 10 and 10:30 a.m. on Thursday and some places I would have to be at before 3 p.m. on Friday if I wanted to see my contact person.

The Tillamook Cheese Factory is one of the most popular tourist spots in Oregon––especially in summer.

I left at 7:15 a.m. on Thursday, July 9, expecting very little traffic. Surprise! Surprise! Everyone else was getting an early start too. Within five miles just past Sea Lion Caves was a bad accident that closed the highway. I was stopped for at least 20 minutes. Then again between Newport and Lincoln City was another bad accident. Traffic was backed up for miles in either direction, but was moving at a snail’s pace one lane at a time. I almost turned around and headed back; this was not good.

The ride up was in and out of fog and gorgeous and windy. So I hung onto my hair every time I got out of the car! I stopped at five places in Tillamook and one of those three times. What I didn’t plan on was stopping at some places both Thursday and Friday and yet that’s what I ended up doing. I’d leave a book or books and either pick up or drop off more on Friday. So my schedule for Friday kept changing. It’s good to be flexible.

The Tillamook County Pioneer Museum is in downtown Tillamook and carries my bridge books.

In Tillamook, I stopped at the library and showed three books to the person I’ve been trying to see since 2011. She said that she would email me regarding her decision. It’s the only library on the Oregon Coast that has none of my books. Then I dropped off books at Tillamook Cheese and the Pioneer Museum, both of whom have been carrying them since they came out.

I also found out that the Air Museum is still open. When many of the planes were moved to Central Oregon last year, I thought it had closed. Not so! The café and gift shop are still there as well as exhibit rooms, a small theater, and about 20 airplanes. Some of the most popular warbirds, however, are no longer there. The museum used to carry my bridge books. So I met with my new contact person in the café and left one of each. There was a board meeting the next morning where a decision would be made. I would stop by the next day.

I stopped at Blue Heron French Cheese Co and they were so busy, I just dropped off three different books and said I would be back the next day. This was not a place that I thought would carry my books, but Ruby at the museum had insisted that I try there when I had talked to her on the phone. So I told her I would call them. 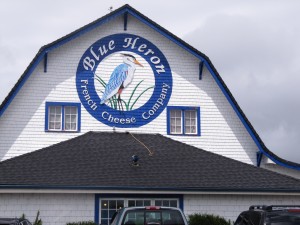 This is the other cheese factory in Tillamook. Expect to find French cheeses and wine tasting inside and farm animals to pet outside.

Then onto Manzanita. I drove the entire length of the downtown four times and never saw a single place to park and people everywhere. So I turned on a side street and within a couple of blocks found a spot in front of someone’s house. Then I trekked back to the main street. Jody at Cloud & Leaf Books caries my bridge books and loved Devil Cat and bought two.

Cannon Beach was next and they have loads of parking, but I still didn’t find a single empty spot. So I parked in an unloading zone. Technically, I was unloading . . . books!! I stopped at the library, where I left a Guide and Devil Cat. I’ll pick up mid-August when I go up for a book fair in Astoria. I went across the street to Cannon Beach Book Co. They used to carry both my bridge books. Since their previous owner passed away last year, they have new owners. So I dropped off three books and would stop by Friday.

Then onto Astoria. I went on up to the Astoria Column—glorious view. And the column is entirely shrouded as renovations are taking place. It is to be completed by the end of September 2015.  I didn’t think the gift shop would need any books since they had ordered some in the spring, but I told my contact Sherry that I would stop by. She is also the source of info about a book fair coming up. She is to email me info, which I’ll pass on when I receive it.

I headed to the Crest Motel and found they have new owners too. I went for a non-river view room because it costs less in tourist season. I loved my little room. It had a great view of trees and felt very private. And it felt good to be away from the hordes of tourists.

Strangely enough, none of the places that carry my books in Astoria needed any. All want me to call before coming up in mid-August.

I met friends for dinner, Jim and Diane Forst. Jim and I were co-editors at Oregon Coast and Northwest Travel magazines for 10 years. It was a lovely visit. 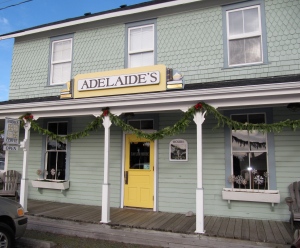 Adelaide’s Coffee & Books is in Ocean Park on the Long Beach Peninsua. It’s a delightful place in an historic building.

I was up early on Friday and headed halfway up the Long Beach Peninsula to Ocean Park, WA, my northernmost stop at Adelaide’s Coffee & Books. I received a check for the books I had on consignment there, but left no new ones since the building is for sale and the young couple don’t know what’s going to happen to their business. It’s a delightful place; I hope they can continue there. I’ll call in September to see what’s happening.

I then stopped by Time Enough Books at the waterfront in Illwaco where Karla bought some of all three of my books. They’ve carried the bridge books for a long time.

Then I stopped in Seaside at Beach Books. Last time I tried to stop there, I couldn’t find it. It had moved. This time I had the new address. I dropped off the bridge books that Karen Emmerling wanted and she decided to try Devil Cat. This bookstore has a resident cat and even a cat gate on the front entrance when the door is open. My kind of bookstore!

Cannon Beach was just as crowded as the day before. It took a couple of go-rounds, but I finally found a parking spot. Cannon Beach Book Co bought a couple of Crossings.

In Tillamook, I stopped at Blue Heron at 1:30 p.m. and my contact was still too busy to see me. I was asked to return at 3 p.m. So I headed for the Air Museum and made the turnoff. Since the railroad tracks were being paved near the museum, anyone heading there was stopped on the road and given directions for a detour. I thought I had overshot the detour more than once. It was about a 20-minute tour through the backroads of Tillamook County before I met up with a line of cars waiting their turn for the pilot car. That took another 10 minutes before getting to the museum. Fortunately, they wanted 10 copies of the Guides. So it was worth it. Then it was another half hour getting back to the highway.

By the time I headed north to the other side of Tillamook to Blue Heron, it was 3 p.m. They seemed just as busy. I never did meet my contact. I just received a message that they were not interested in carrying any of the books. That was a bit of a let-down after three tries on my part. While I was there the day before, I did buy some Brie. It is very good, and the farm animals in the fields and guinea hens in the parking lot were fun to watch.

Then I headed home. Lots of traffic, but not as windy and no accidents. I stopped to walk about a bit at Boiler Bay. It was beautiful and I saw whales about 12 times. And I wasn’t even trying to spot whales. It was probably just a couple of whales, but they were very active and very close. I could have hit them with a rock—they were that close. What a treat and I was the only one paying any attention to them. There were lots of people there, but they were walking dogs or on their smart phones or picnicking.

I was home by 7 p.m. Tired but pleased that I could do the trip. I also listened to an audiobook on the trip. When I do that, I get engrossed in the story and don’t worry about the drive. I could just keep on going. . . .

Bottom Line: I sold 48 books and several places want me to check back in mid-August when I return for a book fair in Astoria.

After my hair trim. Not my favorite look, so I’ll stick to the wig for a few more months.