There are PowerPoint programs and there are PowerPoint programs. People tend to hate it when the words are up there on the screen and the speaker reads them to you anyway. It’s given PowerPoint a bad name. Well, knowing that, I put up only photos––no words. The photos are taken from my books to enhance my book talks. Since all of my books have several photos and some also have illustrations, it enables me to do this. Some people can just ramble on about their photos and stay within the time parameters, but I can’t. So I stick to a script. That way I know that what I think is important to say gets said each time.

My first born continues to do well despite competition from his little brother.

• The first one is about how Crossings came to be, about Conde McCullough, and about each of the five main bridges. The program also includes several relevant stories of old-timers that are intertwined throughout the book. It has black-and-white historic photos and lasts about 40 minutes and can be shortened by leaving out the old-timer stories. I’ve given it about 45 times up and down the coast, in Eugene, and in Oregon City. The audiences range from more than 100 in formal settings to casual groups in campgrounds to groups as small as three little old ladies in an assisted living facility.

The Crossings Guide came out in January. 2013 and continues to do well.

* The second program focuses on the The Crossings Guide by taking the viewer down the coast bridge by bridge. But it also shows how Crossings was a part of each of the five bridge celebrations on their 75th anniversaries, since that was the purpose in getting that first bridge book out in 2011. I also talk about the interesting hard-core bridge aficionados I’ve met since writing these two bridge books. I’ve given this program about 10 times to various groups. It’s in color and can be shortened to just the bridge-by-bridge portion.

I couldn’t resist picking a cover photo that had the bridge in it.

* The third program covers the history of Florence after Around Florence came out last summer. Right from the get-go, I prepared 20-minute, 30-minute, and 40-minute versions to choose among. Most photos are historic and all are black and white. I was glad I had all three versions because in one busy week, I used all three. I’ve given one version or another seven times. The most recent was to the Daughters of the American Revolution a few weeks ago on May 22, 2015.

Now I’m putting together a fourth PowerPoint program, since Devil Cat is out. I’m signed up to do a presentation about the book at Gold Beach Books on August 1, and I hope to be lining up a few more soon.

How I put the programs together

I start with the photos. For Devil Cat, which has a total of 52 illustrations and photos, I selected 34. With a PowerPoint program in your computer, it’s easy to hit “New slide” and then click on the photo icon. Then I select “picture from file” and select the photo I want. It’s then automatically inserted, and I can work with it to fit. It’s easy to add new photos at any point in the program or to drag photos to new locations. 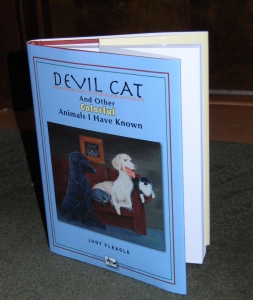 Need to have PowerPoint program for Devil Cat ready to go by August 1.

For photos from the book that were not in the computer picture file, it took a bit more doing. These included old color prints and original paintings used as illustrations. So I got out my trusty camera and took photos. I put each one in wonderful daylight with the flash off. Then I used my connect-to-my-computer cable and uploaded all photos on my camera. I selected only the ones I wanted to go in the picture file. Once there, I straightened each photo if needed and cropped out all background around the actual photo or illustration. Then they were ready to insert in the PowerPoint program.

For the script, I’ve usually just written what I want to say as I scroll through the pictures. For Around Florence, I read a few paragraphs from the Introduction before using the script.

So far, for Devil Cat, I’ve taken several chunks of edit from the book. I think I’ll read the entire Introduction, since it is fairly short. Then I’ll read at least part of each chapter’s Background section, which sets up the circumstances of the animal for that chapter. Then I’ll tell a little about each one, but not too much. I want to get the audience to want to buy the book to see how each animal turns out. I’ll have to be careful not to reveal too much.

I’ve got several hours of work yet to hone the excerpts and then to figure out what to say between them. And to get it all to fit in 20-minute, 30-minute, and 40-minute versions. I’ll do the long version first. I’ve got my photos in order and started the script process. So it has begun.

By using only photos and sticking to a script, I’ve made PowerPoint work for me. Groups really appreciate it when you stick to their time limit. And I’ve usually been successful at selling books after each program. I like to arrive an hour early to set up, greet people ahead of time, and possibly sell some books then too.

* In 2011 in Waldport during one of my early presentations, I was there to help celebrate the 20th anniversary of the new Alsea Bay Bridge, the 75th anniversary of the no-longer-standing old bridge, and the 100th anniversary of the town. Many activities were happening. The first clue that things weren’t going so well for me were the few people in the audience. I even went outside and rounded up a couple more. Then just as I was opening my mouth to begin, a band started playing right outside the window.  I moved the screen and my podium away from the window, but Sousa marches played with great fervor kept drowning me out. That day, I lost my voice and only sold one book. Not fun!

* In 2011 on Friday nights all summer long, I gave presentations in the outdoor amphitheater in Honeyman Park campground just south of Florence. Some evenings were cold, some windy, and one evening it started raining midway through the presentation. The ranger whipped out plastic and covered all equipment and books, I grabbed my jacket, and the audience pulled up their hoods. The program went on and nobody left. Hey, this is Oregon. What’s a little rain!

I am enthusiastically describing steel workers high on Coos Bay Bridge. once I got the program working again.

* In 2012, in Port Orford about two-thirds of the way through the program, a dialog box appeared. When I clicked “okay,” everything went black. I announced an intermission and that it should be fixed shortly. But I was saying to myself, “What the hell do I do now?” I would click something, and nothing would happen. So I’d walk away saying to myself that it was okay to end the program, but then the computer would  do something and I’d go back and continue trying. Everything was so slow. This happened a dozen times before I got it back to where I was and the program finally resumed. Nobody left, they just chatted amiably among themselves. Lovely audience!

* Not long after Port Orford, I was scheduled to be the speaker for City Club in Florence. So I asked Dick Smith, who did the research for Crossings, if I could borrow his laptop. He let me, and I put the program on it. We also share the projector. My laptop was Windows and Dick’s was an Apple. I didn’t realize that there might be a problem. He forgot to give me the VGA adapter, which I would need to makes it possible to use an Apple laptop with the projector. So there I was, the speaker with a laptop and projector that could not be connected. Boy, did I feel stupid!

The chef, who was busy serving lunches to City Club members, dashed to his nearby home and came back with a flash drive. In the meantime, another fellow wandered over and said he had the same model of laptop. He got into the computer and found the program. Together they put it on the flash drive and plugged it into the equipment owned by City Club just as my presentation was supposed to start. The PowerPoint program went flawlessly and a fellow stood up afterwards and said it was the best program they had ever had. You just never know what’s going to happen.

* In 2013, I gave a presentation at the Eugene Public Library. By then, I had my own new Apple laptop, a Macbook Pro, with my own VGA adaptor to connect with the projector. In spite of all this new stuff, midway through the program, I got a blankety-blank dialog box. A voice from the audience said to hit “escape,” which I did. It got rid of the dialog box, but it took me out of the program. So I motioned for “the voice” to come up to the podium, which he did. Within 15 seconds, he had it back to where I was, and the program continued just fine. Love those nerds!

* In the summer of 2014, I was in Junction City doing a program on The Crossings Guide at an assisted living facility. Five minutes before starting time, a gentleman tripped over the cord and everything went black. No matter what I did, I couldn’t get things working. The gal in charge kept telling me, we had to stick to the schedule. So I forgot about the PowerPoint and went to Plan B. I passed out books to everyone and using my script, I took them down the coast bridge by bridge. It was a lot like teaching first grade, “Is every one on page 9?” They thought it was great!

Everything went smoothly during my presentation in Oregon City in 2012.

In spite of the occasional glitches, most of my PowerPoint programs run smoothly and most questions I can answer easily. Because I usually sell a number of books afterwards, I consider it one of my best marketing strategies. Besides, I meet such interesting people and enjoy hearing their bridge stories and their old-time Florence stories.

In the beginning, it took me out of my comfort zone, and at times, it has been a steep learning curve. But all in all, my PowerPoint programs have been very rewarding experiences.