Devil Cat and Other Colorful Animals I Have Known has received positive responses so far.

I just mention whatever my newest book is to friends, workmen at my home, neighbors and they take a look and buy it. Devil Cat has been here since May 7, but I’ve been too busy to get it out there in bookstores and other venues. I have, however, mentioned it to people who coughed up the money to buy it––the drive-up teller at the bank and a neighbor I saw the other day whom I haven’t talked to in ages are just two. And the responses have been positive. This book is an easy, quick read with lots of illustrations and photos. Selling one at a time now and then is not my main business plan, but I always keep some of each in my car trunk just in case. So far, I’ve sold a dozen just by mentioning it.

The “let’s see how it works” plan

I’ve always wanted to sell my books during Rhody Days, but this is the first year I’ve done anything about it. I signed up for the outdoor vendor’s market in Old Town. I was appalled at the fee–$250. I talked it over with my publisher, Bob Serra, and we both thought it was worth a try. Since I’m still not up to full steam ahead energywise, I had my neighbor, Hope, help me set up the canopy and table and chair on Friday afternoon during the allotted time in the allotted spot.

I used the two-sided wind protector for the first time in my canopy. I borrowed a larger table because mine is too small for four books.

On Saturday, I arrived an hour early and parked about half a block away. I had a dolly to carry the books and stuff needed. Two trips did the trick. I had lowered the canopy one level to make it less susceptible to wind, which is a given in Old Town. Instead of wind, it rained during the night. I hadn’t figured on how slippery the metal poles would be on the canopy when they were wet. It was worthy of You Tube as I went from pole to pole trying to raise each one and not succeeding until about the fifth go round. Even so it’s hard to raise a canopy by yourself. They were so slippery; I just wanted to sit down and cry. Then the table, which we had put top down was so wet, it took the newspapers I had brought to read and my lovely absorbent scarf to dry it. Then the spot next to me started up their generator within two feet of my canopy right next to my chair where I would be sitting. That location would be selling ‘shaved ice,’ which greatly resembled what we used to call ‘sno-cones.’ By then, I really did want to sit down and cry.

It was not my idea of a great start, and I would be there from 10 a.m. to 6 p.m. and 10 to 3 on Sunday. Those are long days by yourself. Carole, who rents my downstairs, came by to help pack up both days and on Sunday, her son also helped. It was greatly appreciated.

On the other side of me were the Emerald City Wind Spinners. The young couple selling them was delightful and the spinners were high quality––20-gauge steel, beautiful colors, and coated to withstand the weather. And each was attached to a motor, which kept them spinning. They were mesmerizing.

Consequently, folks were headed to the shaved ice or the wind spinners and barely noticed my books sandwiched between. And when somebody did stop, I had to shout over the generator to make myself heard. Besides being noisy, the generator had fumes, which caused a headache before the day was over. I did manage, however, to sell six each day––just enough to cover the cost of the space rent. And the second day, the generator was on the other side, in a box and much, much quieter. No headache on Sunday. 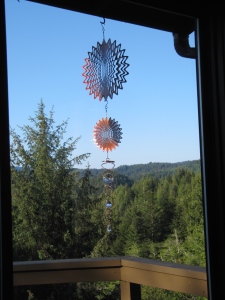 My new wind spinner hangs on my deck. I’ll probably bring it inside in the winter.

I won’t do it again, but felt it was worth a try. The upside was that several people noticed the books and said they would stop by the bookstore or museum to buy a copy, a new business in town wants to sell one of my books, and I’m now the proud owner of a beautiful wind spinner.

Presentations work really well for me. Just get the word out that you give PowerPoint presentations and groups seek you out. I have three programs each geared to a different book and can shorten or expand to fit the time requirements of whichever group I’m working with. After the presentation, I sign and sell books.

Last Friday, May 22, I gave a presentation to the local DAR (Daughters of the American Revolution) chapter. It had been originally scheduled in January, but I was unable to do it because of chemo. They rescheduled, and my program was about Florence history with 71 photos from Around Florence. I hadn’t given any presentations since last August and was a bit nervous. I practiced the night before and felt the strain in my voice. They had no microphone and there were 20+ people there in a large room, but I had no problem. It went off without a hitch. In fact, it felt really good to be back in the groove.

At the DAR presentation, I didn’t run out of voice, and I sold a dozen books.

Carole met me there and carried in books and was my volunteer clicker. I pointed to her whenever I wanted the next photo to pop up. Afterwards, I sold 12 books––mostly Around Florence but some of each of the others. I don’t usually charge a fee when doing presentations locally, but I was given a gift certificate for Mon Ami. Carole and I will enjoy lunch there in the next week or so.

To sell more than a dozen books

Most of my books are sold through booksellers––bookstores, tourist hotspots, gift shops, and museums throughout western Oregon. I give a 40% discount, which is the industry standard, and deliver the books or ship (usually at my expense) if not convenient to deliver. And I only deliver if I have several stops to make. I don’t argue the discount or spoil a sale by insisting that they cover shipping. By being easy to work with, the same venues buy my books again and again and really work at selling them. 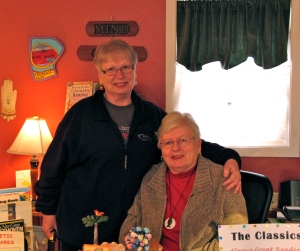 Mary and Mari at Mari’s Books in Yachats always go above and beyond to sell my books.

I had intended to have Devil Cat in most of these venues by now, but I’ve been overwhelmed with stuff around the house and yard that needs to be done—cleaning inside, weeding and deadheading and raking up rhody blossoms outside. Because the weather has been ideal for working outside, that’s where I’ve mostly been. The weeding is best done while the ground is still moist and the rhodies start looking really awful once the flowers start falling. The rain last week hastened that process.

I’m back to about 40% of my normal energy, which means I still have to take it easy. Whenever I work in the yard, I have to lie down and rest afterwards. So it seems like half the time I’m napping. Sir Groucho loves it; he just curls up next to me.

I know I’ve said this before, but this week I hope to get Devil Cat out there—at least in the Florence area. Wish me luck!