Posted on January 11, 2015 by crossingsauthor

When I saw my oncologist, Dr. Buchanan, on Dec 22, I received only good news. The CT scan showed that all the enlarged lympth glands from my chest area are no longer enlarged and the ones in the abdomen are greatly reduced. Whew! That means the chemo is working and I’ll continue with the protocol on schedule. What a relief! 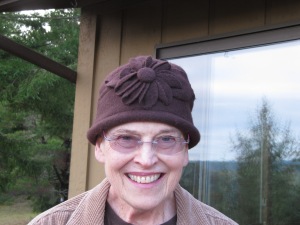 This is what I was wearing the day I received good news from my oncologist–both the hat and the smile.

And, what’s more, my heart is functioning better than it was on the first MUGA heart scan. Then it was at the “lower end of normal” and now it is up into the normal range. The doctor seemed puzzled by that until I reminded him that I was under serious pain and heavy duty pain meds and totally stressed for that first test. Doctors just love it when you explain things to them. But Dr. B was very gracious and simply said,”Hmm! Perhaps!” Not that I was expecting, “Wow! What a great insight, Judy!”

This time around was much like the third time. I had a slow bounce back, which made it truly wonderful that my sister was here 24/7 for 10 days to be my energy when mine was nearly gone. I had four really weak days and then two semi-weak and then I was able since this past Monday to get by without sleeping away most of the afternoons. She left Wednesday, and I missed her as soon as she was gone. 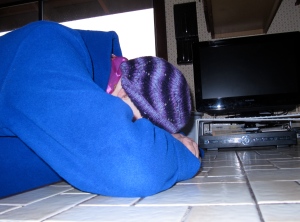 During my low days, happiness is putting my head down and closing my eyes. I just want to rest or even go back to bed and sleep. So I would have rest periods or at least rest-my-head periods in the mornings and be back in bed for long naps in the afternoons. During those days, I mostly just slept and ate.

Nausea has not been a problem at all since the first go round and then only mildly. Thank goodness! So with my love of eating and no nausea, we had some terrific meals while my sis was here. She’s a great cook, and it seemed like we were going grocery shopping every few days. I lost 20 pounds prior to chemo and haven’t gained any of it back. So when the doctor says to eat “calorie rich foods,” I try to follow his orders every day. I consider this a major perk of chemo.

This following topic is definitely not a major perk. I wasn’t going to mention temporary incontinence until it happened a second time around and realized that it really is a chemo side effect. And since I’m trying to really tell it like it is, I decided to include it. And perhaps help someone avoid the embarrassment I endured.

On chemo day of the third go-round, I got up to go the restroom after being hooked up for a couple of hours. As soon as I stood, I had “an accident.” Not totally, but enough to make a stain on my pants and make me totally mortified. Unbelievably, no one noticed. My friend Jan, who was staying with me that day, didn’t even notice. She was busy unplugging and reattaching the cord and plug on the IV stand so I wouldn’t trip over it as I maneuvered it to the restroom. All the nurses were too busy with patients to notice and the other patients hooked up were either sleeping or on their laptops or iPads or smart phones.

It’s kind of a nightmare situation, and I was too embarrassed to tell anyone. Just try soaking up moisture soaked fabric with paper towels. Better than nothing, but it doesn’t work so good. And of course, I had no Depends or extra pants with me. So the rest of the day was most uncomfortable. Fortunately, I had a blanket to keep from getting chilled during the next few hours of chemo, and my driver that day, Connie, had heated seats in her car for the hour-and-a-half drive home. It could’ve been worse. 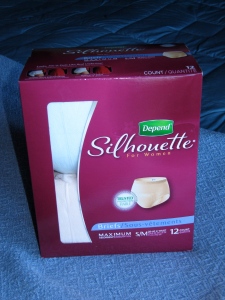 Since temporary incontinence is a side effect of chemo, at least for a few days, a box of Depends becomes my best friend. Who knew!

On the fourth time around, I was prepared––even though I wasn’t sure it would happen again. I was wearing my Depends.( God! I never thought I’d be saying that!) Good thing too because the same thing did happen. It’s not total loss of control. It’s more like an unstoppable slow leak whenever you have to go and stand up. Yuck! The good news is that it only lasts for a few days. At least, that’s been my experience on both of the last two cycles. So I’ll be prepared this coming week when I start my fifth cycle.

I can’t believe that my fifth cycle is already about to begin. I’ll have the same chemo week routine: give blood on Monday, see Dr. Buchanan here in Florence on Tuesday, go to Eugene for chemo on Wednesday, and receive my shot of Neulasta at the hospital on Thursday. At least this time around, it’s not Christmas week. And I ‘ve lined up the same wonderful gal I had before to help me on my low days. She’ll be with me for three hours a day for six days starting January 20. That will be a tremendous help.

Before those low days hit, I have some finish up stuff to do for my new book, Devil Cat & other colorful animals I have known. I need to write the blurb for the back cover and line up some endorsements to also have on the back cover.

Bob Serra, my publisher, is about half way through laying it out. Now that the holidays are over, he is back to working on it. When he gets it all laid out, I’ll be able to see it and go over it and over it checking every little detail. We’ll go back and forth until there are no more changes to make.  I’m getting anxious to see how it will look with the photos and illustrations all laid out with the text. It’s something to look forward to when my low days are over this next time around.

Here’s wishing each of you a wonderful New Year ahead!