Posted on November 27, 2014 by crossingsauthor

I hope everyone had a Happy Thanksgiving. I spent mine feasting with my neighbors. We all had a great time.

Since this is a day of thanks, I’d like to reiterate my thanks for my friends near and far, old and new, who have come forward and been such help. I’m thankful also that in spite of not feeling my best, I have my fourth book in the hands of my publisher. Yesterday, I stopped to pick up the cover illustration. I will get this to Bob in the next few days. 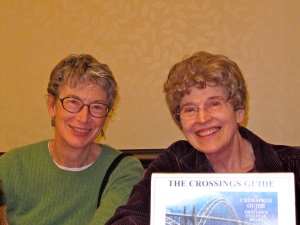 Edna and I at the booksellers’ table at the Victorian Belles Holiday Craft Sale.

I’m thankful too for my sister’s 10-day visit. It was fun having Edna here as well as extremely helpful. She was able to fix meals, clean house, restock wood for the wood stove, on the days that I didn’t have much energy. She left Monday, and I missed her instantly. But she plans to return for the fourth cycle after Christmas. 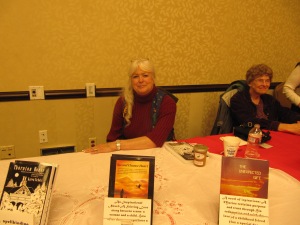 Karen Nichols and her three books.

I’m also thankful for Connie and Karen who attended both days of the Victorian Belles Holiday Craft Sale and sold my books right along with their’s. Edna and I did put in 4 ½ hours there on Saturday. Between their efforts and mine, we sold 14 of my books. And they also sold lots of books.

I’m with Connie Bradley here at the booksellers’ table.

And I’m thankful that so far I’m coming through chemo in better shape than I thought I would.

That’s not to say I haven’t had problems, but no major ones. I’ve mentioned the big things in previous blog posts that can cause problems like nausea, changes in taste and appetite, hair loss, and constipation. Here, I’ll concentrate on the pesky little things that I haven’t previously mentioned.

* Peripheral neuropathy. After each chemo round, I have less feeling in my toes. At night I sometimes try to kick off socks, and find I don’t have any on. It’s just the neuropathy that makes me feel that way.

* Mouth Sores. This is my biggest concern at the moment. I have teeth that need to be brushed and flossed and use an electric toothbrush to keep the gums healthy and tough so my teeth don’t get loose, which happened once. Even with all this, I have to have my teeth cleaned twice a year. I build up plaque easily. In spite of this, my teeth are in great shape, but I’ve had to take special care of my gums since I was a little kid.

In front of all the stuff I take for chemo is Magic Mouth Wash. Not cherry flavored cough syrup and, definitely not for kids.

Now I have inflamed gums and at least one mouth sore. It’s possibly something called thrush. I’m not to eat hot, spicy, acidic, or salty foods. I’m to stick to a bland diet. Yuck! And I’m to stop cleaning my teeth except gentle brushing with a soft brush and gentle toothpaste. I’ve also been prescribed Magic Mouth Wash. This stuff is potent. It has Benadryl and Lidocaine and numbs my mouth for a little while after I swish with it. I accidentally started to gargle with it and quickly spit it out. Afterwards, my throat was numb as well as my mouth and lips. The directions are swish and spit—that’s it! And they mean it.

* Cold head. Without my hair, my head and the tops of my ears are always cold unless I cover them. So I wear various headgear during the day and my wig if I’m venturing out. At night, I have my wonderful purple cap. But it has stretched with wear and sometimes when I turn in bed—it doesn’t and ends up covering my face instead. Hope gave me a new pumpkin colored nightcap this week that she knitted, and it fits really snug. I love it! It doesn’t have a mind of its own.

I love my purple night cap, but I move and it doesn’t and ends up covering my face instead of my head.

* Possible loss of eyebrows & eyelashes. So far I still have mine, but I’m afraid to scratch if an eyebrow gets itchy. I don’t want to look in the mirror and see one gone. I’m trying to be proactive, in case they disappear soon. Yesterday at the store, I tried to find an eyebrow pencil. All I could find were endless eyeliners. Having never used either, I was out of my element. After about 15 minutes, I found some pencil-shaped eyebrow pencils with print too small to read and bought what I thought was brown. When I got home under better light and a magnifying glass, I realized it was purple or as it said––amethyst. Drat! Blondish wig and purple eyebrows—people just might notice!

* Heartburn. During the first cycle, I sat up and drank a big gulp of water during the night as I usually do, but this time, my throat tightened and started burning and I had to jump out of bed, run to the sink, and spit out the water. I just knew it was anaphylactic shock and that I was dying.  . . . When I didn’t, it took forever to feel better. Finally, I was able to drink a little water with baby sips. For the next week or so, I had several such attacks of heartburn after eating during the day and after drinking water at night. It only happened in the first cycle. Thank goodness!

* Body odor. I have a metallic smell that permeates my clothes, pajamas, and sheets. So I take a shower or wash up really good every day. I asked the doctor if it was the toxins leaving my body. He said, “Not exactly!” and went into a detailed explanation. I prefer my toxin theory.

* Flatulence. At times it sounds like I’m trying out for the campfire scene in Mel Brooks cowboy movie. And it has the same metallic smell! (Aren’t you glad you read this far! Sorry—just telling it like it is!)

* Night sweats. I thought I was through with hot flashes and night sweats when I was in my 50s, but now during chemo when I sleep several hours at a stretch, I often wake up really, really sweaty. Not as bad as the “drenching night sweats,” which are a symptom of lymphoma that I had a few times before starting chemo, but nevertheless not fun. Because of this, it is recommended to use cotton sheets and pajamas.

The odd and unexplainable . . .

* Upper thigh leg muscle pull. This has never happened to me before, but it has three times so far during chemo. Since I was a teenager, I’ve often had restless legs in the evening and occasionally during the night. My way of dealing with it was to exercise my legs until they were tired and then go to bed and get to sleep while they were still too tired to bug me. Can’t do that anymore. After one night of doing donkey kicks at 2 a.m., I woke up the next morning and could hardly move one leg. Walking anywhere was painful and took forever. I didn’t venture out of the house for five days. This second chemo cycle, it has happened twice but not as severe. Since the first time, I have been careful not to overdue any stretching or exercise and have no clue how either of these happened. They each lasted three days.

The Nikken magnets that I put in the Ace bandage on my wrist.

* Wrist pain. About a week ago, I noticed that when I used both hands to raise myself up out of a chair, one wrist felt like I had whacked it with something, but I hadn’t. Then during the night this past Sunday, it got worse, and I had trouble sleeping. Monday morning, I awoke to a useless right hand along with the wrist pain. I couldn’t even pinch with it. Or eat with it, or write with it, or drive the car. It had only enough strength to type on the computer. I was really worried. My neighbor Ruth brought over some Nikken magnets. So I wrapped the wrist in an Ace bandage that could hold the three magnets on the wrist. I wore it all day and that night. The next morning, the strength was back to normal and the wrist barely hurt. It was like my right hand simply decided to take a day off. I have no clue why it happened or if the magnets helped.

So from the cold top of my head to the numb tip of my toes, I can do without those pesky little things that come along with chemo. Even so, most of my days are good ones. For that, I am thankful!