Posted on November 4, 2014 by crossingsauthor

“Boy, do you ever owe me big time!” Theresa jokingly said as she came in bearing groceries for me. I felt like saying, “Get in line!” All week, my friends came through big time.

This past week, the chemo/cancer battle was on, and I had no reserve energy. Zero, zip, nada. All I wanted to do from the time I got up until I went to bed was to close my eyes and lie down. Everything was such a tremendous effort.

From Tuesday through Friday here was a typical morning: get up between 8 and 9 a.m., put on robe, feed Sir Groucho, rest, fix breakfast, rest, eat breakfast, rest, clean up the dishes, rest, brush and floss teeth, rest, wash up or shower, long nap, get up, and make the bed. By then it would be 1 p.m. and time to fix lunch. Every time I did anything, I could hardly wait to lie down and rest.

When I rested, I didn’t necessarily go to sleep. I was just half there––sort of awake but dopy. I had lots of phone conversations, but it was hard to concentrate or to remember to whom I said what.

One of my friends said they would be sending me a book about integrative ways to survive cancer during treatment and afterwards. When it arrived, I couldn’t remember who sent it. After awhile, I narrowed it down to my neighbor Ruth or my friend Jan in Eugene. I was trying to decide which one to thank, when Teeta, my roommate from college who lives in California, called to see if I’d received the book. Thank goodness she called for she never entered my mind as a possibility. She got a big kick out of my lack of remembering.

This lack of remembering is an example of chemo brain or brain fog. All week, if I didn’t write something down, I would forget it or mix it up.

The only way I got through last week was with the help of my wonderful assortment of friends, some of whom are also neighbors, some are from the FFOB committee, and others I’ve known for years and a few for decades.

Even when a cancer patient is going through the throes of chemo, blood tests have to be done to monitor what is happening.

The week before, I had lined up who would be taking me where and when, since I couldn’t drive in such a dopy condition. Monday, when I was still feeling good, Connie took me. She also brought me some delicious lentil soup.

On Tuesday, I spent three times as much time as usual to finish my blog that I had mostly written the evening before, insert photos, and post it. I kept doping off at the computer.

Wednesday, Shelley took me to the lab so they could draw some blood, and then brought me right back home. I could hardly wait to lie down. She brought me homemade applesause and brownies and carrot soup for dinner.

That afternoon, my oncologist, Dr. Buchanan, called to say my white blood count, liver, and kidneys were doing fine. I told him I was soooooooo tired. He said that it was normal and that within a couple days I should have more energy. I felt better after his call.

On Thursday, my big accomplishment was to have a shower and wash my hair. That was the day, I had scheduled an appointment in Eugene to be fitted for a wig and to have my head shaved and the wig trimmed and styled for me. I had canceled it the day before because of being too tired to go. Ruth was going to take me, but when I cancelled, she found a place in Florence where I can have the same thing done and she gave me the number. I’ll schedule it, later this week. My neighbor, Hope, knitted me a cap to wear after my head is shaved, for when I’m not wearing some other head covering. 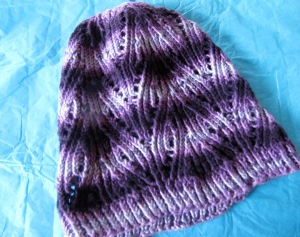 Hope knitted this cap for when my head gets shaved.

Also last Thursday, Hope, who has a background in medical research, went online and found a study on cancer fatigue done by the Mayo Clinic that showed promising results by using American Ginseng. Besides sending a link to the study, she sent me a link to the company that supplied the Clinic with ginseng. So I checked it out and ordered some.

On Friday, I decided to keep on my robe all day and not make the bed . . . until Karen called to say she had another illustration done to show me for my book and had made me a quiche and would like to bring them by. So I got dressed and made the bed and we had a lovely visit. She kept it short, realizing that I was a bit dopy. Then I napped.

I also had some lasagne from neighbor Ruth and Chinese food from neighbor Cliff and Hope, which was so helpful on those nights when I had no energy to fix dinner.

On Saturday, some energy returned and the brain fog lifted. I actually was able to do a budget for the month and write out bills. And when Teeta and Jan called during the day, I knew which end was up and to whom I was speaking

On Sunday, I swept off my decks and porch and balcony from all the debris that had blown on them from the huge windstorm more than a week before.

I survived last week with no nausea but a minimal appetite. Some of the foods I normally like, I can’t stand right now––especially if they’re sweet. I had heard that chemo messes with your taste buds, and it’s ture. I started a list of the foods that I knew I would eat.

So on Sunday, when my friend Theresa called to say she was going to the store and what could she pick up for me, I told her the foods on the list that I had run out of. She brought them to the house and then asked what else she could do. I had her bring in wood from the garage. I have been using the woodstove because it has such a wonderful cozy heat. I was down to my last piece, so her timing was perfect. And we had a lovely visit.

These tomatoes are from my greenhouse and will ripen inside.

Earlier on Sunday, Cliff, Hope’s husband, came over and replaced the light bulbs on either side of my garage that had both burned out in the past few weeks. He then went down to my greenhouse and picked all the tomatoes––green as well as red ones––and got rid of all the plants. Since the greenhouse won’t have sun again until March, the green plants would turn gray with mold within a few weeks, and then you’d need a hazmat suit to take them out.

On Monday, I continued to feel good and actually sorted my laundry and did one and a half loads before Shelley arrived to take me for yet another blood test. This time we made several stops before heading home. I picked up forms from Dr. Pearson’s office to start my cancer insurance claim with Aflac, I mailed bills at the post office, I delivered six copies of Crossings to Books ‘N’ Bears, and did more grocery shopping at Fred Meyer.

On Tuesday afternoon, Hope will take me to an appointment with Dr. Buchanan here in Florence, and I should find out if my second cycle will be on schedule.

This past week was the low point of this first cycle, but with the help of friends, I made it through. And, yes, I owe them all big time!

Judy Fleagle spent 22 years teaching 1st and 2nd grades and 21 years as editor/staff writer with Oregon Coast and Northwest Travel magazines.Since 2009, she has written five books: "Crossings: McCullough's Coastal Bridges," "The Crossings Guide to Oregon's Coastal Spans," "Around Florence," "Devil Cat and Other Colorful Animals I Have Known," and "The Oregon Coast Guide to the UNEXPECTED!!!."
View all posts by crossingsauthor →
This entry was posted in Uncategorized and tagged chemo brain, energy, friends. Bookmark the permalink.