Posted on October 18, 2014 by crossingsauthor

When it comes to cancer, the biopsy’s the thing. It lets you know what you’re up against.

Some people would rather not know and pretend all is well. In my case, pain and weight loss let me know all was not well. Before the biopsy, my doctor thought it was lymphoma, but everyone else was worried about metatastic melanoma because I have had two melanoma skin cancers. With everyone expressing concern about those skin cancers, that became my worry too.

So a week ago Friday, when Dr. Pearson called and said it was B Cell Lymphoma, I was relieved. I had done some research online and realized that this was the most common lymphoma and very treatable, if you can tolerate the prescribed protocol.

He had already made an appointment for me with the oncologist he admires and trusts the most to handle this type of cancer at the Willamette Valley Cancer Institute in Eugene. So this past week, I went there to meet with Dr. Buchanan. He answered my questions, got any forms and prescriptions I will need ready for me and then went over the drugs and protocol in detail. He also jotted down a schedule. He made the overwhelmingness of the whole situation less daunting.

If the lymphoma is in an early stage, radiation is often used first. But mine is in an advanced stage––above and below the diaphragm. So my prescribed protocol is six sessions of chemo at three-week intervals in Eugene and then possibly radiation.

Before the chemo starts, I need two more tests. A PET whole body scan to find any more enlarged lymph nodes, which I’ll do Monday in Eugene. And a MUGA scan of my heart to make sure it is healthy enough to withstand one of the chemo drugs. This test can be done in Florence. 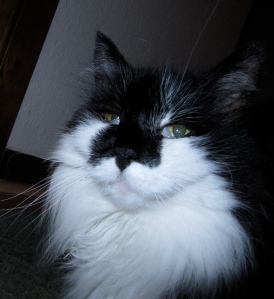 He knows something’s up, but not what. He won’t let me out of his sight.

Next Thursday, I start chemo in Eugene. My whole life has changed and will continue to change, but my one constant is Sir Groucho. Wherever I go in the house, day or night, he is close by. He knows something is up, because our routine has been so disrupted. He’s simply not letting me out of his sight

Meanwhile, my fourth book is progressing. A couple of weeks ago, I gave the manuscript of Colorful Animals I Have Known to my publisher, Bob Serra of Pacific Publishing, to edit. He has recently returned from a trip and let me know that he’ll get started on it soon.

I met with illustrator Karen Nichols yesterday, and she showed me about 10 of the 15 illustrations she has agreed to paint. I am very pleased with how they are turning out. On a couple of them, she has to rework Asa’s pom-pom tail, otherwise no changes. We went over the last five or so illustrations. Now, she’ll be able to complete the project. So I’m tentatively planning on having the editing and photos and illustrations all ready to put together by the end of November. 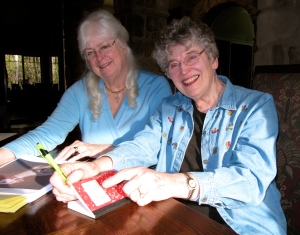 Karen is about two-thirds of the way through with the illustrations for Colorful Animals I Have Known.

Also on the plus side, my friends have been calling and emailing with support and friends and neighbors have been taking me to medical appointments, to fill prescriptions, to get groceries, etcetera, which is greatly appreciated, since I’m not driving due to the pain meds. Actually, the support has been overwhelming! I’ve just been stunned!

Next week is a really big week with the PET scan, MUGA scan, and start of chemo. I’ll let you know how it all goes.

Judy Fleagle spent 22 years teaching 1st and 2nd grades and 21 years as editor/staff writer with Oregon Coast and Northwest Travel magazines.Since 2009, she has written five books: "Crossings: McCullough's Coastal Bridges," "The Crossings Guide to Oregon's Coastal Spans," "Around Florence," "Devil Cat and Other Colorful Animals I Have Known," and "The Oregon Coast Guide to the UNEXPECTED!!!."
View all posts by crossingsauthor →
This entry was posted in Colorful Animals I Have Known and tagged chemo drugs, Florence Festival of Books, lymphoma, Willamette Valley Cancer Institute. Bookmark the permalink.