Posted on October 8, 2014 by crossingsauthor 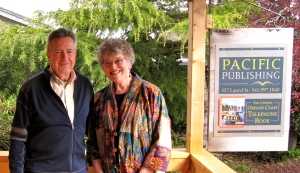 One good thing happening right now is that Bob Serra of Pacific Publishing has my manuscript for my next book Colorful Animals I Have Known. His first job is to edit it. I gave the ms on the day of the FFOB.

It’s amazing how quickly your life can totally change and then so do your perceptions of what’s normal. I went from one of the people in charge of a major event where I was juggling all kinds of activities every day and being bombarded with questions and making final decisions to becoming someone who needed help just in getting to the store and being so weakened by pain and lack of sleep that every little thing became a really big deal. The pivot point was the day of the event. That is when I started taking pain pills in the daytime, which meant I started feeling dopey while awake and could no longer drive my car while under the influence.

I spent several days last week sending out thank-you emails to every Florence Festival of Books participant. It’s the same basic letter, but I tried to personalize each one a little. Between those, I would nap but usually did not sleep. I was acting like a sick person. Then I began to feel like a sick person—almost too tired to walk downstairs and fixing whatever was the easiest to eat and so on.

Then I got up last Sunday morning and decided to get some things done. I vacuumed the rugs, lay down briefly, finished the thank yous, and had lunch before lying down again briefly. Then I started sweeping the house. I got a couple of rooms done before my friend Theresa stopped by. She brought a check from the newspaper to cover a story I had done awhile back about kayaking. But she also brought two fabulous tiramisus and three chocolate truffles. She knows me well.

I put on the tea and we shared the tiramisus. Lovely, simply lovely. The truffles I saved for after dinner desserts. After she left, I finished sweeping the floors and then after lying down briefly, I mopped the floors. That’s always a big job. Then I fixed dinner. I had spent much of the day doing normal chores and had a wonderful visit from a friend. Acting normal made me feel so much better.

Cherry tomatoes and other tomatoes have been ripening in the greenhouse and that is another good thing that is happening.

So on Monday, I got up and cleaned the bathrooms and after some phone calls and emails had lunch. After lunch, I cleaned three large windows inside and out (one was a sliding glass door). I had promised myself that after FFOB, I would get these cleaned. So I did. These were not so hard. I didn’t have to climb out on the roof or get out any ladders. After that, I even took some paint and went outside and repainted a section of the fencing where I had painted it a couple of weeks ago. I had done that part too late in the day, and it didn’t have time to dry properly before being damaged by rain later that night.  And every sunny day I water the greenhouse and pick the red tomatoes. I can’t say often enough how good it feels doing normal things.

But the next few nights, I got little or no sleep and was back in the sick groove. The pain seems greater when you haven’t had any sleep and you have to spend most of your time lying around because you’re too tired to do anything else. In sick mode, I always know how many hours it is until I can take the next pain pill. This is a new norm that I don’t like.

Yesterday, I spent the morning trying to sleep and succeeded in a little dozing. In the afternoon, my neighbor, Hope, came over and took me grocery shopping and to the bank where I could make deposits for both personal and business accounts. Never have I enjoyed such mundane activities so much. Then she invited me to dinner. I almost said no because I was so tired, but I’m glad I went. It was lovely––good food that I didn’t have to cook and great conversation that perked me up. I was back in the normal groove and it felt good.

That night, last night, I slept––really slept––for the first time in days. I still woke up at hourly intervals until 1 a.m. and then I took another pain pill before sleeping in two-hour intervals. It was wonderful. So this morning, I’m feeling human again and ready to do more “normal” activities––like writing this post.

I’ll try to do as much normal stuff as I can because of the psychological lift it gives me as well as making me feel better physically.

This past week, I’ve been in a holding pattern. Tomorrow is the big day. I go to have my biopsy, and that’s when we find out what we’re dealing with. Send good thoughts my way tomorrow.