Posted on September 30, 2014 by crossingsauthor

I will still cover the FFOB in this post, but not as a participant, and I’m not going to be away after all. 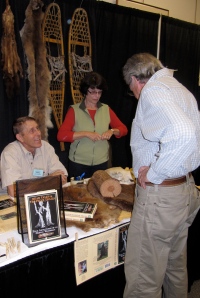 The first signs of trouble were during my quirky week when I mentioned that for two nights August 28 and 29, when I lay down in bed, my back would hurt. Well, that continued every night for the next four weeks and I couldn’t sleep for more than an hour or two at a time—maybe four hours maximum during a night. Sometimes it was my back that hurt and sometimes my hip or leg––all on the left side.

Lack of sleep does a real number on you. I found myself forgetting to do routine things, driving up the coast to Waldport and back I had a real struggle keeping my eyes open. And sometimes the pain would last during the day. I kept to my usual busy schedule and nobody seemed to notice.

As to the five-week break, this is a heart breaker. I had planned to go to Italy with my sister. We were taking a 17-day Rick Steves Tour of the best of Italy and arrive a day early and spend a couple of days there after the tour. And then I would visit my mom and the rest of my family in Bakersfield for a couple of weeks before returning home. We had been planning the trip to Italy for more than a year and had become giddy with excitement as it got closer.

Last Thursday, I got up and weighed myself and realized that I had lost another five pounds and I haven’t been trying to lose weight. I had lost about 15 pounds in the past few months and my clothes were beginning to look awful on me. 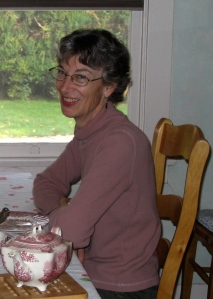 My sister will take lots of photos and send postcards.

So with unexplained pain and unexplained weight loss, I made a decision I didn’t want to make. I called my sister and told her I couldn’t go. There were lots of tears and a few cuss words as you can imagine. My sister will still make the trip, and I’m glad cause she worked so hard in making all the arrangements. Besides, I’ve been to Italy, but she hasn’t. She’s under orders to take lots of photos and send postcards.

The next day, which was last Friday, I got in to see my doctor. In the physical exam, he found something. After an ultra sound and a CT scan, it was determined that I have several enlarged lymph nodes in my abdomen and a few in my chest. A tentative diagnosis is lymphoma. Next week, I’ll have a needle biopsy to determine for sure what we’re dealing with.

A week earlier, on the 17th, I went to the walk-in clinic and was prescribed pain pills to help me sleep, but they weren’t potent enough to do much good.

Last Friday was also the day to set up and get everything ready for the FFOB. I got there at 10 a.m. along with the rest of the committee and got my table ready. Unlike the others, I took off to see my doctor and didn’t return. Later that afternoon, after the CT scan, Connie, my co-chair, was there to greet me. She wanted to know how I was doing and to let me know that everything was all set  for the big day.

That evening, I went to hear our Keynote Speaker, Teresa Rhyne. She was fantastic, and we had a small crowd of about 75 or so. Several of the participating authors were there during a meet and greet between 6 and 7 p.m. and stayed for the talk. It was great fun. 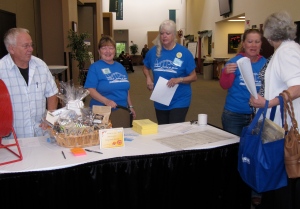 Those in blue shirts were either committee members or Friends of the Events Center volunteers. According to all the comments and evaluations, they were incredibly helpful in making the 4th FFOB a success.

That night, I got hardly any sleep and about 1 a.m. developed a new pain on my right side that was worse than anything I’d had yet. But I tried to ignore it and got up and got ready for my big day at the FFOB. When I got there, I put the finishing touches on my table and walked around to greet participating authors and publishers. At 10 a.m. the doors would open to the public, but about 9:55 a.m., I got cold sweats, queasy stomach, light-headedness, as well as the unrelenting pain. So I asked one of the volunteers to man my table for me for awhile. Then I went out to my car and lay back in the passenger seat, hoping I’d feel better soon. Every 15 minutes or so, someone from the committee would come out to check on me. I didn’t get any better.

Finally, my friend Theresa arrived at the events center and called me from her cell phone wanting to know where I was. So she came out, took one look, and drove me to the emergency room. More tests––EKG and chest x-ray––and they finally gave me some morphine to take away the pain. Wow! That stuff really kicks ass! And the doctor there gave me a prescription for more potent pain pills. Theresa stayed with me and then drove me over to Fred Meyer to get the prescription refilled as well as pick up some bananas and milk that I had run out of. Then she took me home and fixed me lunch.

My table was manned by volunteers all day and they sold $343.24 worth of books. I think they were trying to outdo each other in selling them. And the event was a great success. They did just fine without me.

The day was beautiful and there was a nice crowd. We had Featured Readers this year. These were the first 16 participants who signed up to read in 15-minute segments. This year, they were located on the stage and the audience for each reader was also seated on the stage. There were 10 to 15 people in each audience. We were thrilled; that had been a problem last year. The lights were dimmed with a spotlight over a stool for the reader and there was a mic and a large photo of their book projected on a screen. And there was a drawing for a free book after each person read. In the book fair area, each Featured Reader was announced on a public address system and when folks entered the Events Center, a small flyer with the Featured Readers’ schedule was passed out. We really tried to get the word out, so that each reader would have an audience.

We had 70+ authors of nearly every genre plus 10 publishers. According to the comments and evaluations, it was a terrific success. I wish I could’ve been there

Sometimes a change of plans is forced upon us, and we have to make the best of it whether we like it or not. I’ll keep you posted.