Last night about 10 p.m., I opened my laptop and thought I’d do one last run-through of my Around Florence presentation. But I couldn’t find it. I looked in all the usual hiding places as well in plain sight on the desktop. I did a search for it. Nil! Nada! Nothing! It wasn’t there. The dialog box said it was unavailable because it had been deleted or moved. I’m beginning to have a major dislike of dialog boxes.

My worst fears had been realized. The night before a presentation, the PowerPoint file with all my photos had disappeared. Fortunately, I still had my text. But what was I going to do about the photos?

The night before, I had finished the text and run through it  with the photos and got it the way I liked it about 1 a.m. All along the way, I was saving the PowerPoint photo file. Each time, a dialog box said that it was converting it and then saving it. Toward the end, on my last save, the dialog box said that it could not access it. But since I had been saving it, I didn’t think I had to worry.

I should have saved it in more than one place—like on a flash drive too. But I didn’t. I was tired and turned off the computer and went to bed.

I worked on the text the next day between trips to town, cutting a little more each time, and getting the time down. That evening, I was ready for a last go-through.

When at first I couldn’t find the PowerPoint program, I thought that if I just kept looking, it would turn up. Then I looked at the clock and realized that I had the time to redo all the photos from scratch if I got started right away. So I quit looking for the missing program. I told myself I could do it again, that it should actually be easy the second time around. There would be no trial and error or searching for photos this time. I knew how to do it and knew where the photos were. So I got started.

Once I was working on doing it over, I felt a little better, but I wouldn’t let myself look at the clock. That might put me back into panic mode. I had 71 photos to do, and I did them one at a time. After I got to 20, I took a little break, again at 40, and then at 60. I have an arthritic knee that really begins to hurt, if I don’t move it every so often. I got them done by about 11:30 p.m.

Then I did a last run-through, mainly to see that I had all the photos in the right order and that none were left out. I made a few more fine tuning changes. Then I very carefully saved it to my desktop on my laptop and to a flash drive. I even opened the flash drive on my desktop computer and saved it there too. I was in bed about 12:45 a.m.

I was wound so tight, I couldn’t sleep! Finally, when I did Sir Groucho woke me with a strange meow about 2:30 a.m..

I turned on a low light and saw him scooting across the floor dragging his bottom just like the doggy in the commercial probably for carpet cleaning stuff on TV. Having never seen him do this before, I thought I was dreaming. But I turned up the light and realized it wasn’t a dream. He was on the hardwood floor, and I could see the trails he had made. Yuck! And as my other senses woke up, I knew for sure I wasn’t dreaming. Just lovely!

It took awhile, but I finally got back to sleep. I sure didn’t want to get up when the alarm went off only a few hours later.

Sir Groucho seemed to have made it through the night without any more episodes. When I awoke, he was curled beside me and everything seemed just fine.

So I got up to a normal morning. I had enough time to practice one more time and to put all my changes into the script and run off a clean copy. Then I packed up everything and was all ready to go by 11 a.m. I had just enough time to change, comb my hair, and leave by 11:45 a.m. 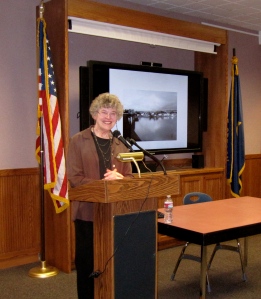 The library’s PowerPoint program set-up makes it very easy for the presenter.

When doing a presentation, I like to get there an hour early, which would be noon for this 1 p.m. presentation. This gives me time to work out any problems while setting up.

I had been told to just bring the PowerPoint program on a flash drive and it should work fine on the library’s new set up. I had been told the same thing when I was doing a bridge presentation last summer at the Eugene Library, and my flash drive didn’t work there. I was glad I also brought my laptop and projector. That program went off just fine.

So I had my flash drive as well as my laptop and projector this time. I was ready for whatever. As it turned out, all I needed was my flash drive. And all I had to do was click a wireless mouse to change to the next photo. I’m used to selecting a volunteer and having them move the arrow on my laptop keyboard every time I point to them. The library set-up is wonderful. Everything is just so easy. I’m a convert.

I got to talk to each person that wanted to buy a book.

Another reason I like to arrive early is to meet the people as they arrive. Today, I was pleased to see many familiar faces. There was a good crowd, probably between 25 and 30. And they were very attentive. Best of all, there were no glitches. From my vantage point, it went smoothly and was within a couple of minutes of what I had planned, which left plenty of time for questions and still be under an hour.

How terrific! Folks are lined up to buy books and have them signed!

After the program, I got to talk to people as I sold them books. And there was a line––a long line. How great is that! I sold 14 books and signed a few more that folks had bought elsewhere. Everything turned out above and beyond what I expected. It was a lovely afternoon.

And my fridge is back to normal. Whenever I practice with the projector, to see how the photos will look on a PowerPoint program, I use my refrigerator as a screen. I can’t get the whole photo projected on it, but enough to see how it will look. Since this was a new program, I wanted to see how some of these really old photos would look projected so much larger than in the book. 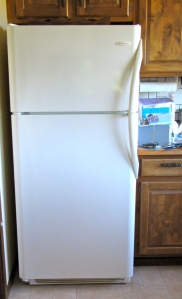 With everything off of the fridge, I can project photos on it.

In order for me to actually see the photos on the fridge, I have to denude it. I have to remove all photos, clever sayings, the zillion magnets, special reminders, everything. But now, everything is back. I returned everything to its rightful place this afternoon, so the fridge no longer has the “brand new” or “nobody lives here” look.

I always forget what a big deal it is to put together a new program. Now that I have it done, I can shorten or add anecdotes to make it better fit different audiences. Today, the Around Florence PowerPoint presentation passed its first test.

My fridge is back to normal. Cluttered, yes, but it’s what I’m used to.

Tomorrow, I’m off to the Yachats Farmers Market once again.

Judy Fleagle spent 22 years teaching 1st and 2nd grades and 21 years as editor/staff writer with Oregon Coast and Northwest Travel magazines.Since 2009, she has written five books: "Crossings: McCullough's Coastal Bridges," "The Crossings Guide to Oregon's Coastal Spans," "Around Florence," "Devil Cat and Other Colorful Animals I Have Known," and "The Oregon Coast Guide to the UNEXPECTED!!!."
View all posts by crossingsauthor →
This entry was posted in Around Florence (Arcadia Press Images of America series and tagged Arcadia Press, Around Florence, Siuslaw Public Library. Bookmark the permalink.