Posted on July 5, 2014 by crossingsauthor

It was the Fourth of July and my first time at the Yachats Farmers Market, 9 a.m. to 3 p.m., as a participant. It was not the only show in town. It competed with the Lions Club Pancake Breakfast, the la de da Parade, the Volunteeer Fire & Rescue Bar-B-Q, and the Ladies Club Pie Social. 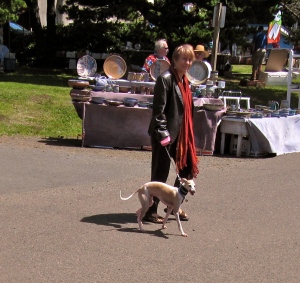 This miniature Italian greyhound was one of the most distinctive dogs I saw.

I don’t think I’m exaggerating when I say there were at least a thousand people in town. In a town with a year-round population of about 750, you notice that. Even the traffic on Hwy 101 snaked through at a snail’s pace much of the day. It was people everywhere. And many of them had dogs––dogs of all kinds. I saw many big and many small dogs. There were several standard poodles in silver, black, and champagne colorations. The most unusual dogs  were the whippet service dog, the Italian miniature greyhound, the three Bassett hounds together in a group, and the very tall Russian wolfhound.

Typical of Yachats––quirky Fourth of July costume and with dog.

I find Yachats full of creative, bright people, many of whom are not afraid to be quirky. So there were lots of strange costumes and outfits and not all were for the parade. Most invoked the Fourth of July theme. Whether I sold any books or not, it was great fun just to be there to see all the people and costumes and dogs parade before me—and that wasn’t even the official parade.

I was definitely the smallest booth. That will change soon. I have ordered a 5 by 7 canopy, which will probably be the smallest canopy but definitely larger than what I’ve got now. Most booths had canopies that were 10 by 10. 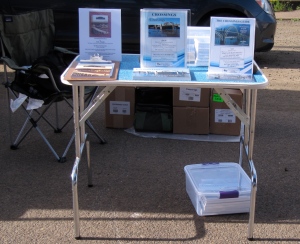 My 40-inch table was the smallest booth at the Yachats Farmers Market.

My canopy was ordered last Sunday and should be here by next weekend. I sure hope so. My location was in the sun but shaded part of the time by the large canopy next door to me and by high fog that rolled in mid-day. Unfortunately for me, the fog rolled out and left me in the sun for the last couple of hours. The breeze kept it comfortable, and I had a hat, long sleeves, and sunscreen to keep me from getting sunburned. The backs of my hands still got it though. 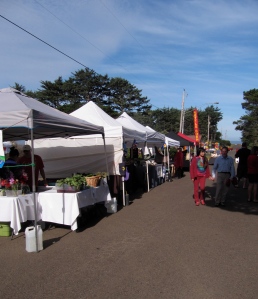 Most participants had canopies to protect from the sun. The booths extended around the back of the Yachats Commons and into the trees in front.

The breeze can turn into heavy-duty wind at times, but it didn’t get to that point yesterday. I noted the various ways people weighted down their canopies for when it does. Some used plastic tubes filled with cement. Most used milk jugs filled with water. I just hope I can fit the canopy with water jugs in my car along with my table, boxes of books, and smaller stuff. 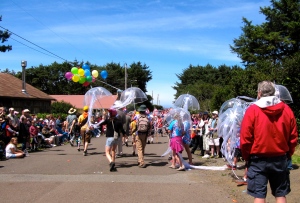 This group may be called the umbrella drill team, not sure.  The la de da Parade began  behind the Commons, sort of in the middle of the Farmers Market  The route led along the bluffs and through town, but stayed off Hwy 101.

Yesterday, I sold five Guides, one Crossings, and gave out many cards about Around Florence to folks who showed an interest. I felt good about the day.

Good thing, I had a positive take on it cause I’ve signed up for most Sundays in July and August. So I get to do it all over again tomorrow.