I rather enjoyed revisiting my past through my most memorable pets. It was fun to read Colorful Animals I Have Known this past week because enough time had elapsed since I’d last looked at it.

I can’t emphasize enough the importance of leaving time between the “getting it down” of a piece of writing and the editing, rewriting, and tweaking part.

I read it with fresh eyes this week. In fact, I read it three times. The first time, it was the content that got me. I relived those long-ago days and the stories brought me right up to the present. Even though I was totally engrossed, I still made a bunch of changes. Since I was reading it on the computer, I put the changes in as I went along.

Pepper became the perfect pet when we lived in a one-room cabin in the redwoods.

The second time through, I did it on hard copy and matched up the photocopied photos and something to represent the illustrations with the newly edited text. Then I went through it again. This time I gave thought to the photos and illustrations and concentrated on each sentence, each word, and made a number of changes––more than I did on the first go through. I inked in the changes on the hard copy and then had to put them in on the computer. It’s a two-step process and more time consuming, but I think it’s necessary at least one time through at this stage. A couple of days later, I gave it a third go through, and again, I made lots of changes. This time, I was at the computer and of the mind-set that it was the last time through. So I took my time. Of course, I’ll go though it again.

How does a writer know when to stop tinkering? We all know of stories that were over edited that lost their freshness, their spontaneity. My stopping point is when I read along without wanting to stop and make changes. I can usually feel when it’s ready. As a test, I let it sit for a week or more and then read it through again. If I don’t feel like tinkering, I figure I’m done self-editing.

This doesn’t mean the editing is done. It will receive further editing by my publisher, when I turn it in to him. He will be busy with other projects until after September, so October 1 is my due date.

Asa was a great companion to Walt during his last couple of years.

I still have a section about Asa, the black Standard Poodle, to rework and possibly add more. I sent it out for factchecking and have not heard back yet. I’m anxious to get it back and get that section finished. Then the text will truly be finished.

I had an exciting meeting with illustrator, Karen Nichols, this week. She had two acrylic paintings to show me. I could hardly wait to see what she had done. Animals are so tricky. Well, I absolutely fell in love with the one of Pepper, the English Setter. She had captured him both in coloration and in attitude. The other one of Devil Cat still needs some work, but I’m sure she’ll get it. We discussed terms, and she had more questions about specific pets. She also had an idea for the cover that I liked. I felt really good about the meeting and about how her illustrations will really enhance the book.

Nearly every day this week, I spent revisiting and remembering segments of my life through the pets I’ve had. There were numerous anecdotes where I laughed out loud and others where I reached for a tissue. I think others will like it too. 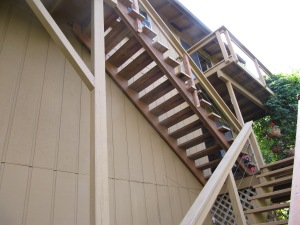 The upper stair supports are new and so are a couple of the posts. The actual steps were not replaced.

Note: Follow up on post #140–It’s always something: The garage door opener was fixed right away, and the cabinet door that lost it’s screws on the upper hinge got fixed this week.  Both are working fine now. On Tuesday, Evan and his brother rebuilt my back stairs. They tore the upper stairway apart and away in the morning to leave a gapping hole and after lunch rebuilt it. I was so impressed at how quickly they got it done. And I heard from Great Lakes Window. They will be sending me parts to repair my window. After they arrive, I will have to hire a window company here in town to install them. So of my four problems that occurred in 10 days, it’s three fixed and one on the way.