Posted on June 1, 2014 by crossingsauthor

After last week’s post, it seems appropriate to have an upbeat one. Three of last week’s problems have not been resolved, though. I haven’t fixed the cabinet door yet, Evan hasn’t come to work on the stairs yet, and I haven’t heard back from the folks who are supposed to be upholding the warranty on the window yet! So I was still a bit down when I decided to stick with my plan to do a road trip north to sell books this week.

I first called Friends of Yaquina Lighthouses because they need time to go through more than one person to make a decision. This time, my contact got right back to me and wanted 12 of The Crossings Guide and 6 Crossings. Wow! That improved my spirits. 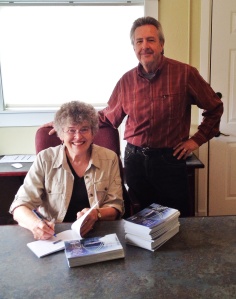 We try to capture every milestone with our adventures with the books. So here I am with Bob Serra signing the very first copies of the second edition of The Crossings Guide.

Before I could make any more calls, I had to go to town. One of my stops was to see Bob Serra, my publisher. The second edition of The Crossing Guide has come in and we are thrilled with how the books look. They are just as nice as the first edition. Since I did make two changes to the text and Bob had the small photo tabs in the outside corners of most pages moved slightly, it is a second edition––not just a second printing. When they first came in last week, I stopped by and we took a photo to mark the occasion and I picked up some. Good thing they came when they did. At the moment, I have only 28 copies of the first edition left.

After I got back home, I continued calling to see if anyone else needed books. It was most unproductive, “No, not now.” “We’ve got plenty.” Or my usual contact wasn’t in. In two of those situations, I left the message that I would be stopping by. On the third one, she would be out until Monday, so I said I’d call then. After I was done, I did question whether I should just mail the Yaquina Lighthouses books and save myself the trip. But there were two possibles and another one where it had been too late to call that usually orders books.

So I took off on Friday, May 30, not knowing what the day would bring. It was gorgeous, but windy––not unusual in the summer months. I stopped at the Historic Alsea Bay Bridge Interpretive Center in Waldport and Mary, who had been out the day before, was in. She didn’t need any more books, but had sold some of the books I had on consignment with her. So she gave me the money she had collected so far. And we had a chance to visit.

Then I stopped at Canyonway Restaurant and Bookstore in Newport, where it had been too late to call the day before. The proprietor, Roguey, took two of each. Good! Things were looking up. And I got to see the first columbines of the year that she had grown in her yard. 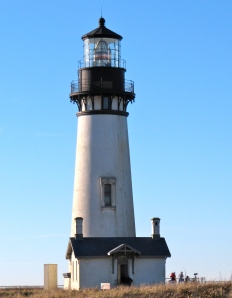 At 93-feet tall, the Yaquina Head Lighthouse is the tallest lighthouse on the coast. It’s on a point of land that juts out into the ocean.

Then I stopped at the Yaquina Head Interpretive Center north of Newport and dropped off the 18 books requested. I took the time to look at the exhibits. I remembered the whale stuff, but had forgotten or not seen the lighthouse exhibit. Exceptionally well done. I didn’t realize Yaquina Head Lighthouse had been called the Cape Foulweather Lighthouse originally. That was because the lighthouse was supposed to be built at Cape Foulweather farther up the coast. But the man in charge of construction decided that the site with its steep bluffs would just be too difficult to build a lighthouse and instead built it at Yaquina Head.

From there I called Allegory Books & Games at Salishan. Helen, the proprietor, was in today and said she was out of both books. So I headed north. I was surprised at all the empty storefronts at the Shops at Salishan. No doubt, a result of the prolonged recession. Helen bought two of Crossings and four Guides. She has a delightful shop with a great selection of books. She’s hanging in there.

Then I headed back south. I stopped at Mari’s in Yachats, even though I had just delivered copies of both books just about 10 days ago. This was a cold call, but once before I zipped right on by only to have them call the next day needing more books. So I took a chance. Mari was in and she said that she had sold two copies of the Guide just that morning and would like five more. She was glad I stopped, and so was I.

Bottom line: I sold 33 books, had a chance to visit with some delightful people, and got to see the Oregon Coast on a sunny, clear day with spectacular waves due to the wind. It was an unexpectedly good day all the way around!

Judy Fleagle spent 22 years teaching 1st and 2nd grades and 21 years as editor/staff writer with Oregon Coast and Northwest Travel magazines.Since 2009, she has written five books: "Crossings: McCullough's Coastal Bridges," "The Crossings Guide to Oregon's Coastal Spans," "Around Florence," "Devil Cat and Other Colorful Animals I Have Known," and "The Oregon Coast Guide to the UNEXPECTED!!!."
View all posts by crossingsauthor →
This entry was posted in Uncategorized and tagged Bob Serra, Friends of Yaquina Lighthouses, Yaquina Head, Yaquina Head Lighthouse. Bookmark the permalink.
Loading Comments...
%d bloggers like this: