Happiness is being able to turn your head up, down, and sideways. Ahh! And happiness is finding the perfect photo that looks just like your dog. I found the perfect shots for both Pepper and Asa. Double ahh!

Being on Valium is a real trip! Can’t say I remember much. I took morning and afternoon naps; got up about 10 and went to bed fairly early each day for nearly a week. But sleep is a great healer

I felt so good this week that anybody asking casually how I felt got the full report––more than they ever needed or wanted to know. But it is so wonderful to feel so good after feeling so rotten for the previous three weeks! And I couldn’t drive for the past week so I also was suffering from a bad case of Cabin Feveritis! So anyone who asked really got an earful!! Sorry about that! 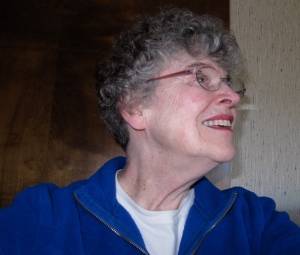 Feeling good cause I can turn my neck and raise my head and feel alert.

During my week of sleep, when I was sort of awake, I did find some possible photos and this week I found more. I looked at so many dogs this week that I started dreaming about them—especially English Setters. I found a great photo during my sleepy period, but have no clue where I found it, so won’t be using it cause don’t know if I can legally. My two favorite photos I discovered were not even for sale. That was a real disappointment. So the search went on and on. If you check on photos for English Setters and click on “more photos,” that’s what you’ll get––hundreds more.

English Setters come in various colorations. I was looking for one that was mostly white with some orange spots and only some feathering. The poses that were most like my dog had the wrong coloring and the coloring that was right had the wrong pose or wrong expression or were too fat or too something. But I did find three that are perfect. Let me repeat that––I found three that are perfect. So it does pay to “hang in there,” “stick with it,” and “don’t give up” There! That’s my allotment of clichés for this post. And I’m deliriously happy with the photos. I had absolutely none for Pepper, so there was a tremendous need. 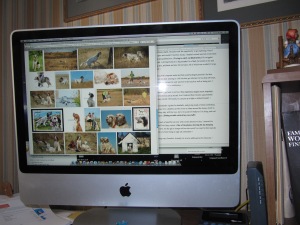 I looked at hundreds and hundreds of photos of dogs. These are English Setters. My text is also there with where photos go bolded.

And a week ago I had found two that were perfect for my black Standard Poodle, Asa. One of them is small and I wanted to know from the American Kennel Club if I could have a high res version good enough to use as a large photo in the book. As it turned out, it’s an old photo and no one knows where the original is. So the answer was, “Sorry, no!” These are not photos intended to sell but just to simply jazz up the page. So I’ve asked if I can still have permission to use in a small version. Haven’t heard back yet.

The other perfect head shot of the Asa look-alike I can use. I’ve negotiated this week with the dog’s owner/photographer and we’ve agreed on prices for both inside and/or cover use. During our negotiations it was the only photo that I thought would make a stunning cover. So we have worked out prices for inside or both or just cover. And again that makes me deliriously happy. I have photos of Asa, but this photo looks more like Asa than any of mine because most of mine the eyes are either weird headlights or non-existent. Just try photographing a black dog; I never perfected it.

I also went through hundreds of poodle photos and found one that shows the whole dog standing. Somehow that was something I didn’t get either. I walked him twice a day for 10 years, but never took my camera. Duh! So I will be buying that one also.

I sent the check for the high res version of a tortoiseshell cat, so I have that. I downloaded another of a tortoiseshell that is smaller and free. Both I needed. Once again, I have no photos of Molly, the first cat I rescued as an adult. I got a beautiful and unbelievably free photo of a calico that looks like Molly’s buddy Sneakers. And I downloaded a few free shots of bobcats to represent Devil Cat, whom I don’t have any photos of either. But for a close-up really evil looking head on face shot, I am paying good money. It looked just like him. When the hairs on the back of my neck stood up, I knew I had to have that shot.

Jetson liked to lie in my flowerbed after spraying all around it, of course. Notice his eyes. He’s one tough dude. (This is a photo of a photo, so not such good quality. The original will be scanned for the book.)

I have lots of shots of Jetson, the cat I knew for 19 years, and of my present cat, Sir Groucho. So it was more a matter of choosing the best ones. I went through every photo in my various piles of prints (before digital) and was looking for Asa in those too. And then I went through all my iPhoto files—again hundreds of photos. Not just dogs and cats this time. And it was darn hard to just zip right through. I kept stopping to say again and again, “Oh yeah!” “On yeah!” And occasionally “Awe!” And then the  “Gosh, that can’t be me––too young, too slim, hair’s too dark!”

I then created a photocopy of everything I wanted to use and noted where it can be found or if I need permission and if I need to pay for it and whom to pay. While I was doing that, I was also going through the text and adding a bolded description of the photo in the text where it should appear. After that, I was finally able to figure out what illustrations I wanted and bolded in those additions also.

My photos and illustrations will be in color. That means white paper because that works best with color and that means fairly heavy paper because you don’t want any bleed through. So once again, I’m looking at a book that will not be cheap to print.

But that is okay. This book has my very first attempts at writing (greatly improved over the years), and I’ve  wanted to do something with these stories, since I first started writing them back in the 1970s as I’ve mentioned before.

I have to go through the text one more time and see if the photos and illustrations (in my mind at this point) are really what I want. And I still have some sections out for factchecking. But with some decisions made and photocopies to go with the text, I can actually do this now. To me, this is when the “book” starts coming together and is an exciting time. So I’ll add that to my list of things to be happy about.

This week happiness has been moving my head and moving it without pain, moving through the day with no dizziness or sleepiness or brain fog, being able to find look-alike photos for Pepper and Asa and Devil Cat, and being able to put photocopies of photos with my text for a sort of book version of Colorful Animals I Have Known.

Here’s hoping there’s some happiness in your life too!