Posted on February 17, 2014 by crossingsauthor

Just like in the rest of the country, the U.K., and Sochi, weather was a major character in the story of the 2014 South Coast Writers Conference. High Wind Watch was posted and came to pass on Saturday. The steady winds were 40 to 50 mph for sure and gusts were 60 to 70 mph at least. Since Gold Beach is right on the beach and all of our events were on the ocean-side of the highway, we really felt it. It was hard to stand or walk because the wind literally moved you, and the rain was horizontal as well as torrential. Just walking 20 to 30 feet from a doorway to a waiting car was enough to get drenched.

The ocean was churning, the wind was howling, and the torrential rain horizontal.

The 60 or so attendees were mostly from coastal communities of Oregon and Northern California. This was a tough bunch used to coastal storms. As I like to say, we live on the edge.

The four workshops from 9 a.m. to 4:30 p.m. went on without a hitch to the accompaniment of howling winds, occasional roof-starting-to rip-off sounds, and constant banging noises outside as well as drifts of horizontal rain flying continually past the windows. Miraculously, the power stayed on.

It was windy and rainy Friday, all that night, and Saturday morning, but not more than just blustery stuff. As Saturday morning wore on, the storm kicked the intensity up a notch. By lunchtime, it was at full gale force. Most of us had paid for tickets to a luncheon of roast chicken and all the trimmings a couple of blocks away at the fairgrounds. In the past, the walk from the high school––where the workshops took place––to the luncheon was a pleasant stroll.

Because of the weather this time, most everyone drove the short distance. Since my car was at the end of the parking lot and I would’ve been drenched anyway, I decided to walk. If the wind had been behind me instead of crosswise, I would’ve arrived in record time. As it was, I kept being blown onto the highway. It had not been a good idea!

I rediscovered that my jacket really is waterproof. I stayed dry. But the jacket got so wet, I could’ve wrung it out. And as long as I held onto my hood, it protected my head. My face and glasses received a good washing, though, and my pants were still damp an hour later. I avoided puddles, so my feet stayed dry within my shoes. I made it there, but you can be sure that I gratefully accepted a ride back.

Author’s Night is open to the public every year. It always starts with a Keynote Speaker. This year it was Melissa Hart, who has written two books of memoir, one published and one about to be, and numerous essays that have appeared in The Washington Post, The Los Angeles Times, Horizon Air Magazine, The Writer, and many more well-known publications. She teaches classes on Travel and Features Writing at the School of Journalism and Communication at the U of O.

Melissa Hart (left) was the Keynote Speaker and, as seen here, also taught a workshop on writing memoir.

Her topic was Write the Thing Yourself: Shamelessly Crafting the Piece You’d Most Like to Read. Her high-pitched voice was irritating to me at first, but she was so entertaining, informative, and funny, my irritation lasted all of two seconds. She laughed at her own anecdotes, and it was infectious. We all laughed and held onto every word. I could’ve listened to her all evening.

Other workshop presenters reading from their own works followed her, and every one was remarkable. We heard humorous and heart-warming stories, poignant poetry, and even cowboy songs. Each year about 10 presenters, including the Keynote Speaker, present 1 ½-hour workshops on various aspects of writing on Saturday and a couple presenters teach all-day intensive workshops on Friday. And one of the 10 presenters teaches songwriting.

Each year during the SCWC weekend, a concert is held at the nearby Pistol River Friendship Hall and one of their entertainers is always a part of the conference. This year, it was Chuck Pyle. He writes and sings in the classic style of westerns and had us all toe-tapping and swaying in our seats.

I attended memoir writing taught by Melissa Hart and learned that she applies what makes good fiction writing to memoir writing. I also now have the topic for my next book, and it was Melissa’s suggestion. The classes are small, usually 12 to 15, so questions and discussion are part of every workshop. It’s also easy to talk directly to the presenter. 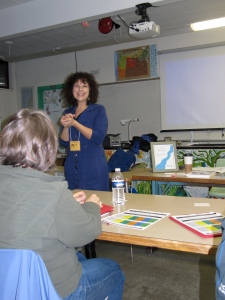 Heidi Connolly taught two of the workshops that I took. I learned more in the one covering “conscious intent.”

I attended two workshops taught by Heidi Connolly, an editor who also offers a complete package of self-publishing services. The first workshop was the one where I got a new way of thinking about editing, writing, and facing life in general. It had to do with conscious intent—how to integrate mind and “creative intuition” and trust both the process and the outcome. It’s always refreshing to look at new ways to do what you do.

The second workshop was about self-publishing. Most of what she covered I knew. So there wasn’t as much takeaway.

The last workshop, taught by Tanya Chernov, covered the importance of place––the setting for your story.  No matter how familiar the setting is, the writer has to describe it as if seeing it for the first time. She guided us through a couple of writing exercises on writing about place.

Tanya Chernnov taught a workshop on the importance of setting.

I felt three of the four were very worthwhile and came away with some new and useful info to help me in my writing. And that’s why I come.

I also come to see friends, most of whom are writers—sort of a grand reunion. A bunch of us had a great visit over the roast chicken luncheon.

After four workshops, I was close to overload. I just wanted to meet with friends over dinner and then call it a day. And that’s what I did. Others went out to dinner and then took in the concert at 8 p.m. at the Pistol River Friendship Hall. And others grabbed a quick dinner and kept going from 7–9 p.m. at Gold Beach Books in Writers’ Circles through reading and critiquing of each other’s work.

My friends that I met for coffee and goodies at Rachels Coffee Shop at Gold Beach Books.

After a good night’s sleep, I met with two friends the next morning who did not attend the conference, but whom I’ve known for years. So we met for coffee and a treat at 9 a.m. at Rachel’s Coffee Shop within Gold Beach Books. We had a lot of catching up to do. So it was noon before I headed for my car.

I had typical after-the-storm weather driving home and made numerous stops for photos and to eat a little lunch. It was windy but gorgeous with clouds and sun and wild surf.  I also stopped in Bandon at Winter River Books to buy gifts for friends.

This is shot from Battle Rock Wayside in Port Orford after the storm.

Since I never go anywhere without checking to see if any venues on the way that carry my bridge books need any more, I did the calling before the trip and two places wanted more. So I made those stops on Friday and sold a couple at the conference for a total sale of 29 books during the trip.

All in all a great weekend: I got some learnin’, did some sellin’, and enjoyed visitin’ with friends. Next year will be the 20th Annual SCWC. Can’t wait!

Judy Fleagle spent 22 years teaching 1st and 2nd grades and 21 years as editor/staff writer with Oregon Coast and Northwest Travel magazines.Since 2009, she has written five books: "Crossings: McCullough's Coastal Bridges," "The Crossings Guide to Oregon's Coastal Spans," "Around Florence," "Devil Cat and Other Colorful Animals I Have Known," and "The Oregon Coast Guide to the UNEXPECTED!!!."
View all posts by crossingsauthor →
This entry was posted in Uncategorized and tagged Gold Beach, Melissa Hart. Bookmark the permalink.
Loading Comments...
%d bloggers like this: