Posted on February 1, 2014 by crossingsauthor

When people ask me when I started writing, I tell them it was after my first marriage fell apart. My husband had left me for someone else, and we were in the middle of divorce proceedings. I had always been the good student, high school leader, Valedictorian and continued the same routine through college, not Valedictorian but graduated summa cum laude. I landed a teaching position in the school of my choice and married the fellow I fell in love with and had dated in college. Life was good! Then after 12 years of marriage, it was over. This was my first major life bump. It was also my first time to be on my own.

During the next couple of years is when I really grew up, and it’s also when I started writing. I have heard and read that writing is therapeutic. Based on my own experience, I’d have to agree. There were nights when, beset with worry, I’d get up and read. One night, I got up and started writing instead. I didn’t have a plan, I just put pen to paper. What came out was about the dog Pepper that we had when living in a one-room cabin in the Santa Cruz Mountains.

This photo looks just like Pepper, the English setter we had.

Then I wrote about when we lived in an apartment and acquired out first pet, a stray cat we named Molly. And all the problems we had with the neighborhood bully, a bobcat-feral cat mix, that we named Devil Cat. This was in the town of Los Gatos (the cats)!

This bobcat looks a whole lot like Devil Cat.

I was writing all kinds of small anecdotes. So I put them into chronological order and made them into readable stories with beginnings and endings. I found that I really liked writing. This was a stressful time where I thought my life was no longer under my control, and this gave me something I could control and took my mind off my problems.

Then life interfered, but in a pleasant way. I started dating. So I put the stories away.

Within a few years I found someone else and remarried. Life went on. After 22 years of teaching, I left my job because Walt retired, we moved to Florence. Those first couple of years were wonderful as we got the house and yard in shape and traveled up and down the coast and all over western Oregon exploring our new home. I had lived in Oregon as a child, but it was new for Walt. 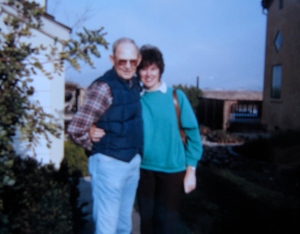 Walt and I shortly after moving to Oregon, about 1987.

I was 43 and knew I would need to find a job, since I was too young to retire. Walt wasn’t old enough to collect Social Security. He was old enough to retire from Lockheed, which he had done as soon as it was possible because his health was not good. We lived on his meager pension and interest from our savings.

We moved to Oregon in October 1985 and in January 1987, a neighbor asked me to go with her to a writing class. I did. The first story I wrote was based on the story I had written about our dog Pepper. The other class members as well as the instructor liked it. That was all the encouragement I needed. I began to think of myself as a writer.

Several members of the class decided to continue meeting as a writer’s group and Coastal Writers was born. I tried fiction and realized after a few stories and lots of rejections that I should stick to non-fiction.  I learned about sending out query letters and how to handle rejections.

In 1987, Walt was diagnosed with cancer and underwent a year of chemo treatments. He almost died more than once. Needless to say, it was stressful for both of us. Once again I turned to writing. I wrote about his illness and fierce coastal storms. And the writing helped. Once again, it was a period of great growth. I had to be the responsible one, the strong one, the one who made the decisions, and kept it together when I felt like screaming and getting in the car and driving as far away as I could get.

In 1988, my query letters resulted in Oregon Coast magazine liking one of my fierce storm stories and asking me to write a piece for them about storm watching and then wanting another story and another and finally asking me to come and work as an editor. That was the start of a second career and a job at the magazine that lasted 21 years.

That year of chemo was terrible and left Walt an embittered man who had aged 20 years. For the next 14 years he endured one illness after another and was not a happy camper. And it wasn’t fun and games for me either. The last year and a half were especially stressful, and I had to have a caregiver with him when I was at work. He passed away in 2001. 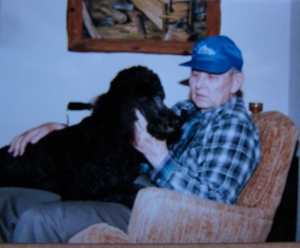 So my animal stories––a result of the most stressful periods of my life––are the stories that mean the most to me. I have wanted to put them in book form for the past few years, but other books––the two bridge books and the Florence history––took precedence.

Now I’ve done it. I have reworked all the animal stories and written all the text that introduces and connects them. I finished yesterday, and that was a big deal for me.

Judy Fleagle spent 22 years teaching 1st and 2nd grades and 21 years as editor/staff writer with Oregon Coast and Northwest Travel magazines.Since 2009, she has written five books: "Crossings: McCullough's Coastal Bridges," "The Crossings Guide to Oregon's Coastal Spans," "Around Florence," "Devil Cat and Other Colorful Animals I Have Known," and "The Oregon Coast Guide to the UNEXPECTED!!!."
View all posts by crossingsauthor →
This entry was posted in Uncategorized and tagged writing. Bookmark the permalink.