Posted on January 11, 2014 by crossingsauthor

These past few years, since I “retired” from Oregon Coast and Northwest Travel magazines, I keep hearing comments such as “You’re just too busy for your own good!” (my mom), “Just reading your blog wears me out!” (Evelyn, friend younger than me) , and “So what do you do in your spare time?” (Don, long-time friend.)

Here is how the Around Florence cover will look. I couldn’t resist picking one that had the bridge in it.

I’m a Type A and keeping busy is my way of life, but this last year was too much even for me. Adding Around Florence to an already busy schedule was the proverbial straw that broke the camel’s back. It was unrelenting stress for months and for the last six weeks, I cut myself off from friends, neighbors, TV––everything that makes life fun––to finish by deadline. Since I’m a perfectionist, I couldn’t just get it done, I had to go over everything again and again. When it comes to my work, I’m hard to please. But I was happy with what I sent in. Don’t know if I’ll like what the Arcadia Press editors do with it. Until I see the proof copy, the jury’s still out on Around Florence.

I learned a valuable lesson—stick with my instincts and don’t be talked into something. My ego got in the way. When people said, “You are the best person to do this.” and “I’ve just been waiting for you to do a history of Florence.”, I believed them. I may have been a logical choice with my connections to the museum, but definitely not the only choice.

At the end of 2012 and in early 2013, I saw Bob Welch a couple of times at events and he told me that he had over scheduled himself and that he was really tired. And so I wasn’t surprised when he retired from being a columnist for the Register–Guard last month. I just read his newsletter this morning, and he is still busy, but having time to do the things he didn’t have time for before. In his words, he is “repurposing his life. “

I’m just going to “get back to my way.” I’ll still be busy, but a schedule that I can enjoy.

Jetson, here playing with a toy mouse, is one of my rescue animals that became a great pet to the age of 19.

Last year, I was going to work on the book about animals that I’ve rescued that have made great pets that I’ve wanted to do for decades. I had to put it aside when I got going on the Florence book. This year I’m finally going to finish it. I know, everyone thinks their pet stories are book worthy. So I’m no different in that respect. But these stories are so off-the-wall that I think they really do deserve to be in a book. They are already written, and I’ve talked to someone about doing the illustrations. I just need to tie them together. I’ve been mulling them over in my mind this past month and will work on them as a priority between now and April when I drive to California to visit family and friends.

I’ll continue to market my bridge books––that is something I thoroughly enjoy doing. Besides making sure they are in bookstores, museums, and tourist hotspots, I may try to attend Saturday or Sunday markets in Florence, Yachats, and possibly even Eugene starting in May.

This will also be a good way to market Around Florence. It should be out May 1, in time for the Florence Rhododendron Festival the third weekend of May.

Next month I’ll attend the South Coast Writer’s Conference in Gold Beach where I’ll reconnect with other writers and friends. SCWC is now accepting applications. I’ve already selected my workshops, sent in my application and fee, and made motel reservations.  I’ll go down early on Friday and make numerous stops at all the venues that carry my books. But first I’ll call ahead.

In May, I’ll start spending some time each week working on the Florence Festival of Books. Connie Bradley and I agreed to be co-chairs again this year. It has grown into one of Florence’s major events—sort of taken on a life of its own. We may add a few things this year. So stay tuned and mark your calendar for September 27, 2014.

Then in October, it’s back to California.

I just returned from three weeks in California this past Monday, January 6. My mom continues to amaze us at 101. I could tell that she is starting to slip because I actually won more games of Gin Rummy than she did on this trip. We’ve finally talked her into getting a lift chair, so she can get up easier and will be more inclined to raise her legs, which she is supposed to do every day for at least an hour.

I always enjoy connecting with my brother and sister and nephew, which we did nearly every night at my mom’s house. Nearly every night, my sister and I prepared wonderful dinners. On Christmas Eve, I fixed cheese fondue, a tradition in our family. And on Christmas day we baked fresh salmon on a bed of vegetables. Yummy!  Lots of good times.—good memories. 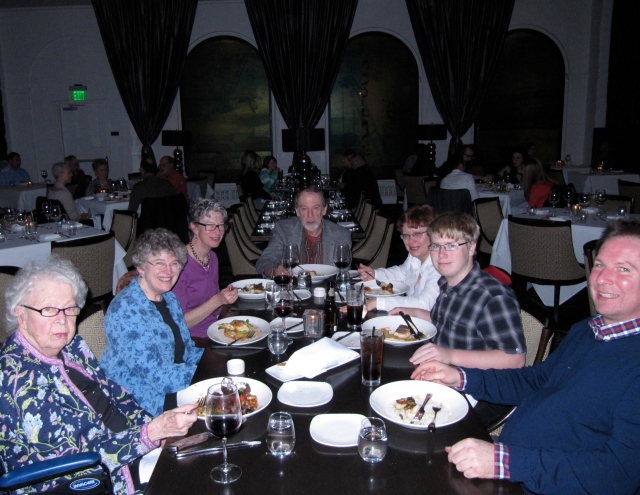 Flying down to Bakersfield out of North Bend with a stop in San Francisco was no problem. Even the weather was fine.

Coming back was a different story. I got up at 3:30 a.m. to get to the airport by 5. No fog and the plane left at 6 on time. Then we had to land in San Jose because the S.F. runways were covered with ground fog. About 20 or so planes landed in S.J. after us. It became an airplane parking lot. After three hours, we picked up our checked luggage and were bussed to S.F. There we, hundreds of us, got in a very long line for those who were being “rescheduled.”

After two hours, I got to the counter and found that my once a day flight into North Bend has been canceled and the next day’s flight was full. So I was rescheduled for Monday. I received a coupon with a number to call for reduced rates at nearby hotels. Goody! I called and got on the list for the Raddison for $99 a night that had an airport shuttle. I would have to call the Raddison to make an official reservation. I also called my friend, Teeta, who lives in nearby Palo Alto to see if she would like an unexpected houseguest for a couple of days. I left her a message.

Since it was about 2 p.m. and I had last eaten at 4 a.m., I was starved. So I found the nearest food court and got a hamburger. And I ordered “fries with that” I haven’t eaten fries in ages, but I ate every one plus about 20 packets of Ketchup. Just as I finished, Teeta called and said she would pick me up at 5:30. So I had a wonderful couple of days with a friend I’ve known since we were both 18 and college roommates.

I finally got home Monday afternoon and been catching up ever since. In my efforts to create a less busy life, I will not stop my blog posts. So check in every Friday or Saturday to see what I’ve been up to with my books. Best of luck in 2014!

Judy Fleagle spent 22 years teaching 1st and 2nd grades and 21 years as editor/staff writer with Oregon Coast and Northwest Travel magazines.Since 2009, she has written five books: "Crossings: McCullough's Coastal Bridges," "The Crossings Guide to Oregon's Coastal Spans," "Around Florence," "Devil Cat and Other Colorful Animals I Have Known," and "The Oregon Coast Guide to the UNEXPECTED!!!."
View all posts by crossingsauthor →
This entry was posted in Uncategorized and tagged California, Florence. Bookmark the permalink.