Posted on September 21, 2013 by crossingsauthor

Getting a major festival of any kind together is an undertaking involving several people and a lot of work. The Florence Festival of Books (FFOB) is no exception. These past couple weeks, I’ve spent at least four days each week doing nothing but FFOB stuff.

This week, Monday was the deadline to get the numbered list of participants to the newspaper along with the table layout. The list number corresponds to the table number where each participant has been assigned. I had spent a good part of Sunday typing up the list plus a separate list with special notes to the person making signs for each table. And I typed up an alphabetical list that also included the number. One of the frustrations of a numbered list is that it is not alphabetical, so it takes awhile to find the one you’re looking for among 89 participants. The alphabetical list will be handed out as an addendum to help make that easier.

This was last year’s 16-page newspaper supplement devoted entirely to the FFOB.

A newspaper supplement totally dedicated to the FFOB will come out the Wednesday before and also function as the program on the day of the event. Its centerfold will have the two-page spread of the table layout with all participants listed in numerical order and the tables numbered. The supplement also has a welcome letter, a history, the blurbs and schedule of the readers for the Readers’ Corner, all of which I updated or proofed last week. Much of the supplement will be filled with ads from the participants. Besides being co-chair, I’m also a participant, so I have an ad and proofed it too.

I thought the layout and list were ready to send to the newspaper when I went to bed Sunday night. On Monday, before I was even through with breakfast, I had a call which resulted in several seating changes. These were all doable. Then when I got to my computer, I had an email forwarded from Lindsey at the events center from someone who hadn’t received a follow-up letter. Whenever someone sends in an application to the events center, I get a copy and send a follow-up letter. Well, she hadn’t received it because I hadn’t received her application. So Lindsey sent me a copy of the application and I noticed that the table number she had just assigned to it was the same as someone else’s on my list. Trouble! And in the current layout, there was no room to add a table. Hmm! It wasn’t even 9 a.m. and we had a bunch of changes and a major problem, and it was deadline day.

I looked at the layout and moved the info table across from the credit card table at the entry to the book area and this made room for one more table. Then I sent the belated follow-up letter, knowing that we could now fit this person in. Then I made the group changes from the breakfast phone call. Next, I called Connie, my co-chair, and we decided it would work. Now, I was ready to go into town to the events center to show Kevin the director and Lindsey our committee member who works at the events center to see if they agreed with the changes. They did. Kevin redid the table layout and  sent it to the newspaper. I went home and redid all my lists and sent the numbered one to the newspaper and the one with special notes to the person doing the signs. That evening was an artists’ reception at the events center followed by a city council meeting being held there to discuss future funding of the facility. They expected more of a crowd than could fit in the council chambers. It was packed, and future funding was approved. 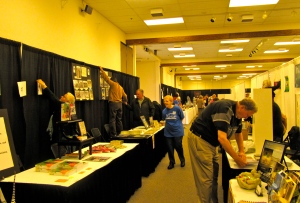 Last minute preparations are underway by participants last year and committee member from the last two years Jan Jett was there to provide help. While she no longer lives in Florence, she is still placing posters and flyers and spreading the word.

Tuesday I got up early and did the agenda for the committee meeting that afternoon and updated the tally sheet. Our final numbers topped out at 80 authors and 9 publishers not counting the Siuslaw District Writers Group aged 6–8 that will also be participating.

All of our committee members are busy. Ellen is in charge of getting two posters formatted and printed at Costco for the Readers’ Corner schedule, listing who is reading what and when. Maire is in charge of organizing volunteers to man the entry table, to relieve participants for short breaks and longer lunch breaks, to be at the tables when the readers are at the Readers’ Corner, to assist at the credit card table, and to just be floor walkers available to help anyone who needs it. Connie is checking to see if the Boy Scouts can be available to help participants carry in their books and show them where they will be sitting when they arrive and to help load back up after the event, she will also call to remind the two pianists who have agreed to play during the event, and she redesigned the evaluation form. Steve is making the signs. And we’re all continuing to place flyers and posters.

There will also be three classes about writing and marketing books taught the day before on September 27. It is not officially a part of the event, but is held in conjunction with it. Committee members, Ellen and Karen, are in charge and each will be teaching a class along with Dr. Veronica Esagui. At 2 p.m. Karen  Nichols, local artist and author, will teach about how to begin your book. At 4 p.m. Ellen Traylor, author of 19 books and publisher of at least a dozen authors, will teach about self editing and style, and Dr. Veronica Esagui, chiropractic physician, author, and moving force behind the NW Book Festival in Portland’s Pioneer Square and the NW Publishers and Authors Assoc, will teach about marketing your own book. Not many people have signed up for the classes, so if anyone reading this is interested. The classes are $25 each or $60 for all three. Each lasts 1 ½ hours and will be held at Port Hole Publications at the Laurel Crossing Building in Old Town, Florence.  Contact Ellen at porthole@centurytel.net or 541-999-5725. (I’ll be taking the evening class. Earlier in the day, I’ll be helping set up for the event and setting up my own table.)

This is my table from last year. This year I’ll have my second book, The Crossings Guide, also.

And Lindsey is making sure the crew will set up next Thursday or Friday morning, so that the committee members can come in Friday afternoon and finish getting everything ready. She will oversee volunteers assembling packets (nametag, several credit card forms that are in triplicate, a welcome letter, and an FEC policies letter.) Lindsey is also making sure that the banner over the door and road signs in sandwich board style holders are put out.

I sent out reminder letters to all participants on Tuesday evening. Wednesday morning I received one cancellation. So I called Lindsey. Before she called the first person on the wait list, I called the person who was sharing the table with the person canceling, to see if she would be willing to share with a stranger or did she want to buy the whole table. She was willing to share. So Lindsey called #1 on the list, and he was pleased. I immediately emailed the newspaper and the sign maker, so they could delete one name and add another. Then I adjusted my alphabetical list, and updated my tally sheet. And I sent a follow-up letter to the new participant.

I received a lot of responses with questions from participants after they had received their reminder letters. That took much of Wednesday afternoon. I got the minutes typed up and sent out that evening.

On Thursday, I got the last local press release done profiling the last of the 17 locals participating. This I sent to the radio station and newspaper. Then I started calling all the libraries and bookstores from Tillamook up through Astoria. I not only asked if I could send flyers and posters about the FFOB, but I asked the bookstores if they needed more copies of Crossings. Cannon Beach Book Company did. And I enclosed information about my new book to all of them, because I hadn’t sent out any info north of Tillamook yet. After dinner, I wrote up the last press release about the FFOB for outside Florence focusing on the great variety of authors participating and sent it to Lindsey at the events center and Ellen who have huge media mailing lists.

Here I am last year with Dr. Veronica Esagui, who will be teaching the class on marketing your own book as well as participating in the FFOB.

Friday, I did nothing for FFOB. Couldn’t believe it! Nada. Zip! I got to work out in the yard and when it started raining, I continued working until I was totally soaked. Then I came in. After changing clothes and drying my hair, I checked my email and still nothing. So I got some house cleaning done. Between the book on the history of Florence and the FFOB, it’s the first time in ages that I’ve had the chance to do much work inside or outside.

Speaking of the book, I saw my two top picks for cover in cover format as put together by the production team at Arcadia Press. They were emailed to me. The one I liked best was the one I found as a fluke after I thought I was done getting the cover photos ready. It’s the one that focuses on the town but also has the newly built bridget. I just love it in the Arcadia Press cover format. And my editor there likes it too; she said it was fabulous! So good news on that front! She hasn’t said a word, however, about any of the photos or captions I sent for Chapters 1 and 2. Don’t know if that’s good or bad.

Next week at this time will be the big day. I think we’re on track, that we haven’t forgotten anything. We’ll find out next Saturday. Maybe I’ll see you there!