Posted on August 3, 2013 by crossingsauthor

With the exception of Tuesday, every day this past week was devoted primarily to working on Around Florence, the book I’m doing for the Arcadia Press Images of America series.

A couple of posts back, I mentioned how bummed I was that Arcadia doesn’t use photographs of photographs. Well, after letting the Arcadia editor know that those were my primary resource, she agreed to look at some. That made me feel better. I also found a lot of photos that I could use from the Siuslaw Pioneer Museum files and that made me feel better too.

This is one of the photos I plan to use in the book that is an original photo. Photo from Siuslaw Pioneer Museum.

For the first deadline, July 27, 10 test scans were due. I used the museum photos for those. Arcadia thought they were wonderful. As they should, since they were scans of original photos.

This past Thursday, I sent off the second requirement: 25 photos, due August 6, of which about half were photos of photos that I feel I absolutely must have in the book. So we’ll see if they pass muster. My fingers are crossed and my positive thoughts have been ramped up to hyper mode. 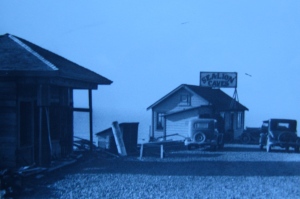 This photo of Sea Lion Caves in 1934 is a photo of a photo that I hope to be able to use in the book. Photo from Siuslaw Pioneer Museum.

This past Monday, I spent from 11 a.m. to 2:30 p.m. going over photos with Bill Tizzard at the museum, and he scanned each of them and then burned them to the disk I sent on Thursday.

Each time I’ve sent photos, captions were also required. These I send via email. Ten captions were not too bad. But putting 25 together was more daunting. You can’t make them up and generalities simply won’t do. They must be factually accurate, interesting, and between 50 and 72 words.

First you have to have something to say, and if the photo only says “Florence sawmill,” then you have to start digging. After I had written the first ten, I ran them by Fred Jensen, museum curator and from a pioneer family. He is my go-to guy on history matters. So he set me straight on a couple, which were not what I thought they were. I had to do some rewriting. 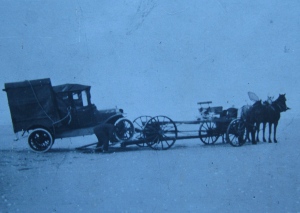 Barrett Stage, circa 1915. When the beach was the highway,  horses often handled it better than gas-powered vehicles. This original photo is part of my next 25 scans. Photo from Siuslaw Pioneer Museum.

Late Monday and much of Wednesday I worked on the batch of 25. I had the actual photos, but had to do a lot of digging. You feel like a detective when only a few words are your clues. When I simply can’t find what I need, it’s Fred to the rescue or I call on another old-timer.

Since I’ve been a docent at the museum for 11 years, done a number of historical stories re Florence for Oregon Coast magazine over the years, and lived here for almost 30 years, I do have some basic knowledge to start from. But captions demand details––dates, names, where, and sometimes what. Details don’t always stick in my memory.

And doing research is an art. You can’t always go by one source—especially if it is third or fourth hand. I try to go back as far as I can to original sources if possible. I’ve already found discrepancies on when each of the jetties were built and, of course, on spellings of names. And on some things like the naming of Florence I’ll just include both stories and let the reader decide. One is more probable, but the other more colorful.

Besides the captions, there are two text requirements on this upcoming deadline: the table of contents and the first chapter introduction. So I started with the table of contents that I had submitted with the proposal and tweaked and fine-tuned until I thought I was done with it. They would prefer each chapter heading to be shorter than five or six words and most of mine are, but not all. Here is one change I made. Instead of “Businessmen and Promoter Establish Florence” I added one word that made all the difference. “Businessmen and Promoter Extraordinaire Establish Florence.”

George Melvin Miller spent his entire adult life promoting Florence. He bought up much of what became the downtown of Florence, platted it, became the first real estate agent and sold it. He then became involved in trying to start a number of enterprises and did start the Siuslaw River Improvement Club, the forerunner to the chamber of commerce. He tried for decades to get the railroad from Eugene to Florence and then worked on getting a railroad line to go from New York to Florence and later a highway from New York to Florence. He was a promoter, a hustler, and spent his life exhorting the wonders of Florence to any who would listen. Extraordinary for sure! 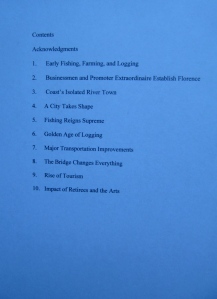 Table of Contents for Around Florence.

Another change was also just one word: “Addition of Retirees and the Arts” became “Impact of Retirees and the Arts.” Much stronger! In Florence, the median age, according to the 2010 census, has risen to 57. During the past three decades, the influx of retirees and the rise of an arts community with galleries, the events center, and live theater have totally reinvented and reinvigorated the town of Florence. Quite an impact I’d say!

And I’ve given the same word-by-word consideration to the “Chapter 1––Early Fishing, Farming, and Logging” introduction, which is limited to 350 words. Some folks think that when you’re limited to a fairly small number of words that it’s easy, but it’s not. When you’ve got a lot to say, limiting it to the essential facts with some colorful info is not easy. My first draft was about 500 words, so I kept going over it again and again trying to trim words without making it too blah! I thought I was through with it a dozen times. Then I’d go through it one more time and make more changes. Ask any writer, writing short isn’t easy. 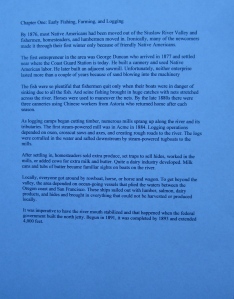 The Chapter 1 Introduction took forever to winnow it down to 350 words.

I spent Thursday morning writing the table of contents and the Chapter 1 introduction. Then I spent the afternoon at the museum doing research for the 25 captions. On Friday, I tweaked and fine-tuned all three. They’re due August 6, and I think they’re ready to send.

I’m still concerned about enough photos, so I’m going to be reaching out to the community. This weekend, I’ll be writing a short press release to be printed in the newspaper, asking everyone to see if they have any photos of good quality that might be of use in a history of Florence. I’ll mention the different chapter headings to help jump-start memories.

On another note: At the end of July, I reached a milestone. Each month, I do a financial report for my freelance business, which is also called Crossings. And this month, enough money was made by The Crossings Guide to pay me back for its printing cost. Printing 1,000 quality books in color on heavy paper is not cheap––it runs to a few thousand dollars. But this week, I was able to write a check to myself to cover the printing cost and that is after all other expenses have been paid. I will sock it in the bank and save it for the next printing. If sales continue to be good, I anticipate ordering 1,000 more in early spring. 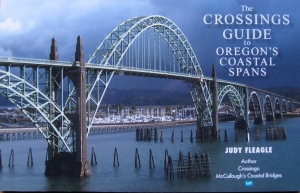 I reached a milestone by selling enough books to pay me back for the printing cost.

Speaking of sales, I’ll be driving to Waldport tomorrow to the Historic Alsea Bay Bridge Interpretive Center to deliver more of both books. 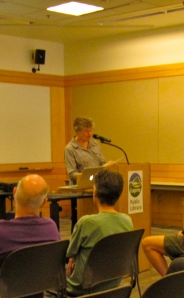 Here I’m giving my presentation to the Eugene Public Library––what I call the “big time!”

And the feedback and hits to my blog have all been positive regarding last Saturday’s “big time” presentation at the Eugene Public Library.

So the fun continues.

Judy Fleagle spent 22 years teaching 1st and 2nd grades and 21 years as editor/staff writer with Oregon Coast and Northwest Travel magazines.Since 2009, she has written five books: "Crossings: McCullough's Coastal Bridges," "The Crossings Guide to Oregon's Coastal Spans," "Around Florence," "Devil Cat and Other Colorful Animals I Have Known," and "The Oregon Coast Guide to the UNEXPECTED!!!."
View all posts by crossingsauthor →
This entry was posted in Uncategorized and tagged Arcadia Press, Barrett Stage, circa 1900, circa 1915, circa 1934, eugene public library, Florence waterfront, Images of America series, sea lion caves, Siuslaw Pioneer Museum, The Crossings Guide to Oregon's Coastal Spans. Bookmark the permalink.
Loading Comments...
%d bloggers like this: