Pitching my new book, The Crossings Guide, restocking Crossings in bookstores, and opening new venues for both books as well as getting Florence Festival of Books fliers and posters placed in bookstores and libraries were all part of why I took my southern Oregon road trip. But none of this had anything to do with why I planned the trip in the first place.

I was going to be driving to Ashland to attend a memorial service for a dear friend who had recently passed away at the age of 97. She had lived in Talent, which is between Medford and Ashland. I had known Virginia since I was 18, and she had always been like a second mom. Whenever I headed to California, I’d stop to spend a couple of days with her on one end of my trip or the other. About 25 years ago, she told me that I was “dead meat” if she found out I’d passed by on I–5 and didn’t stop. Consequently, I always did. The last time I saw her was when I was heading to California in April, and her last words to me were, “Now you stop on your way back too!” I did, but she wasn’t up to having company then. She passed away five days later on Mother’s Day.

My friend, Virginia, who will be greatly missed.

Her memorial service was scheduled for June 24 at 3 p.m. at the church she attended in Ashland, and I was also invited to attend a family/friends get-together for dinner and an evening of sharing.  I’d be spending the night with family members in the area.

So since I was already going to be in southern Oregon, I figured that I should make a trip of it and get the books and fliers placed in places I was passing through like Grants Pass, Medford, and Ashland and in new venues not too far off I–5 in Eagle Point and Shady Cove. I made lots of phone calls, so everyone knew I was coming.

Last year, when I originally placed books in Grants Pass, Medford, and Ashland and distributed FFOB fliers, I stayed with Virginia and she even went with me to make sure I found Village Books and the library in Medford. We had planned on me returning this year to do it all again. . . . 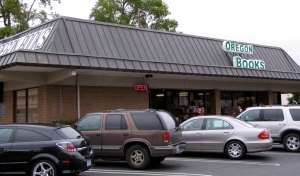 Oregon Books & Games in Grants Pass is a terrific bookstore. 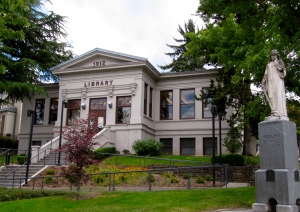 The Ashland Public Library carries Crossings and may carry The Crossings Guide too.

I ate my packed lunch in nearby Lithia Park before heading down Siskiyou Boulevard to the church. Both the church service and the evening of sharing “Virginia stories” were a celebration of life, with much laughter among the tears. She had been quite a character, so everyone had stories.

Some of us were staying with relatives of Virginia’s family in a house in the country near Gold Hill––a lovely setting not too far from the famous Mystery Spot. I’ve known most of the family for years, so it was a great opportunity to visit and catch up.

After breakfast the next morning, I headed back down the road to Medford and then up Hwy 62, the road that leads to Crater Lake along the Rogue River. My late husband and I used to camp along the upper Rogue and enjoyed exploring the area. First stop was Eagle Point at the Bookmark and then in Shady Cove at Book-N-More. Both bookstores liked the books and took the fliers and posters. I may be back in the fall to do a PowerPoint presentation in Eagle Point.

While I was in the Bookmark, a fellow named Everett came in who is a hardcore bridge aficionado. He bought a copy of Crossings right then and there and got me to personalize it. You just never know! 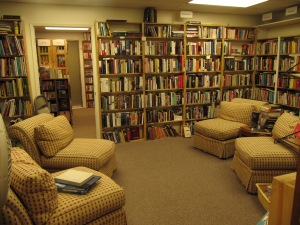 The Bookmark is a very cozy and friendly bookstore in Eagle Point and larger than it appears from the street.

While in the area, I ate my lunch along the Rogue at Shady Cove Regional Park and stopped at Butte Creek Mill in Eagle Point, one of the only water-powered mills left in the state. I’ve bought various stone ground products there over the years, so I got some quinoa and some four-grain cereal this time. It was built in 1873.

Then I headed north on I–5. I stopped at Aquarius Books & Gifts in Grants Pass and placed both books and fliers and posters there. I may do a presentation there also in the fall. Then I headed home and arrived about 8 p.m.

Bottom Line: I sold 61 books ––31 of the Guide and 30 of Crossings. All in all, a good trip! And we gave Virginia a terrific send off! Also, the weather was mild—some clouds, some sun, some light rain. Sounds like Oregon—even southern Oregon!