From the time I first heard mention of me writing a book about the history of Florence until a book proposal was in the mail to the publisher, only two weeks and a day passed, including the trip to Vegas. And one week of that time was spent sitting at the computer putting the proposal together. Not an easy task. Not something I’d recommend.

I’ve written a non-fiction book proposal before, and it usually starts with the author. After writing a few chapters, the book proposal is put together and sent to potential publishers. The proposal usually consists of a brief synopsis and a longer summary about the book, a table of contents plus chapter summaries, research about the market for the book and the competition already out there, and the author’s expertise and anything that’s been published. Then a few sample chapters are included.

Normally, it takes several weeks and that’s assuming the sample chapters are already written. With this book proposal, it wasn’t my idea. I had nothing written. It came out of the blue from the publisher––Arcadia Press. They called Books ‘N’ Bears,  a bookstore in town that sells both of my books, and asked the proprietor, Sue Foster, if she knew of any writers that might be able to put together a book on the history of Florence for their Images of America series. Sue called me. It was late in the afternoon of the day before I left for Vegas. 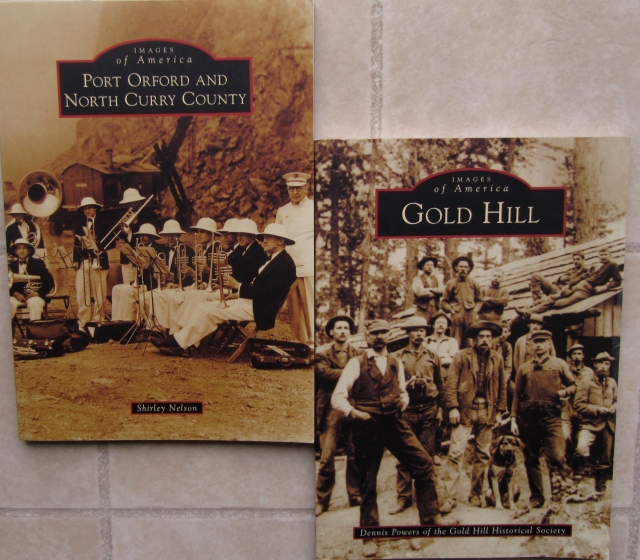 This is the sepia tone look of Arcadia Press’s Images of America series.

I was familiar with Arcadia Press’s Image of America series and actually had a couple of copies given to me by friends who had been the authors. I went through those copies, went online and read more about the company. I learned as much as I could, and then sent an email indicating my interest in learning more about the project to Rebecca, the acquisitions editor. Then I left for Vegas.

When I checked my email the following Monday, June 9, there were several attachments to an email from Rebecca. One of which was an 11-page proposal form. I ran it off and gave it some thought. I decided to go for it. Even if I didn’t get any money for doing it, I could receive the royalties. 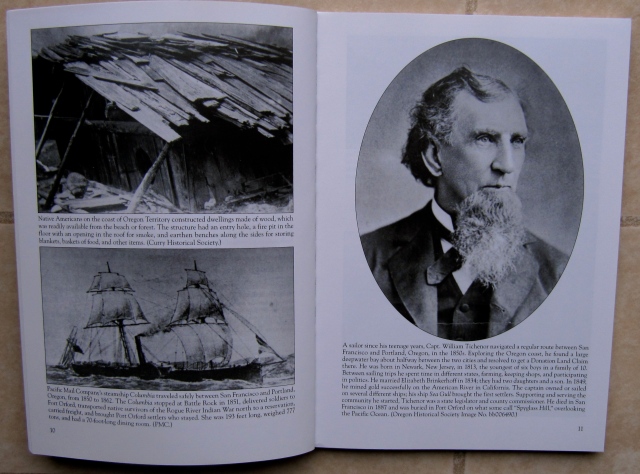 Here are photos from Port Orford and North Curry County, including one of Capt. William Tichenor the founder of Port Orford.

The Images of America series lives up to its name by having many photos with large captions and minimal sections of narrative. So I would need a source of photos. Since I’m a docent at the Siuslaw Pioneer Museum, which has a wonderful treasure trove of hundreds of photos of Florence dating back to when the town first began, that should not be a problem. Also, I know several old-timers with their own collections of photos.

One part of the proposal requested photocopies of between 10 and 20 photos with 50–72 word captions and another part wanted at least three of the proposed chapters outlined. I spent a part of Monday and Tuesday trying to figure out how to organize the history––when to start, what to stress, and when to end. By Wednesday morning, June 12, I jotted down an intro and nine potential chapter titles in pencil. That same morning, I called the museum curator, Fred Jensen, whom I’ve worked with before, and asked him to meet me at the museum that afternoon. I would be on duty as docent and could also walk around and select a dozen or so photos that would provide the representative sample Arcadia was requesting.

When I met with Fred, I was able to fine-tune my chapter titles and added one more. He was a great help. Then I found 13 photos I wanted to use. I took each off the wall, wrote down its number listed on the back, and hung it back up. I also jotted down just enough to jog my memory, so I could write the captions. Then I talked with Bill Tizzard who deals with the digitized photos on the computer. (Not all are on the computer, but Bill’s working on it.) 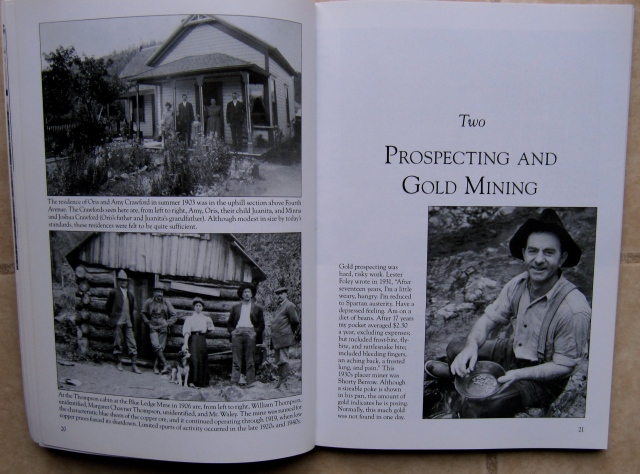 Photos from Gold Hill, including a prospector with gold nuggets.

After I got home, I got on the computer and typed up the chapter titles and then made a list of the photos, with their numbers and basic info and e-mailed the list to Bill Tizzard. This had been a productive day, and I felt much better about the book project.

I had to spend a few days dealing with Florence Festival of Books stuff, writing my Vegas blog, and working in the yard. Finally, Monday, June 17, I started writing.

I wrote the 200-word summary telling why Florence should be an Images of America book and started on the outlining of the chapters. That took a bit of research. I outlined all 10 chapters because I wanted to know what was going to be in the book. That was done by Wednesday evening.

The low-res copies of the photos came in Wednesday evening from Bill. So I ran off photocopies. Thursday, June 20,  I wrote out the captions and did research so I could list contact info for places of business that might carry the book, places that might host signings or presentations, and media outlets that could be used for publicity. There was a bunch more stuff, like my resume, but that was easy. I also had to take time Thursday to make calls for a trip to southern Oregon June 24–25, involving placement of my new book in five towns.

By Friday morning, June 21, I had all the parts ready to put together. On my computer, I could view the proposal form but not download it, which meant I could not type answers on it and e-mail to Arcadia. I would have to type up the various sections and either staple the responses, which I did for those that fit in the allotted spaces, or attach the longer ones with a paperclip. At any rate, I got it all together––all 30 pages––and then met at 11 a.m. with Del Phelps, the President of the Museum board. First time he could fit me in all week. He is also a descendant of a pioneer family and has been a civic leader for decades. So he knows the old and the new Florence. I went through everything with him, and he filled in a couple of blanks for me, added some new info, and was a terrific help. And he wants the museum involved in the project.

During the week, Rebecca had encouraged me to get the proposal in ASAP as there would be a meeting to decide on different proposals early the following week. So I wanted to get it there by June 24. I also had my own reasons for getting it in early. I would want the book out by next year’s Rhododendron Festival, and the company needs six months after they receive the manuscript and photos. So I put down November 1, 2013, as my deadline to get to the publisher. The sooner I can start, the better.

I left Del’s office at 12:15 p.m. If I got it to Shippin’ Shack by 1:30 p.m., it could go overnight via FedEx and be there by Monday. So I dashed home (a 15-minute drive from Florence) and realized I was not going to be able to make the changes and be back in time. So I called Shippin’ Shack back and learned that I could catch UPS at 3 p.m.

So I had a quickie lunch, spent one hour putting in the changes and running off a fresh copy of the outline. I got the whole proposal in the envelope with its label and still had a half hour to get there. Then both the doorbell and phone rang at the same time. Ironically, it was UPS at the door. The driver simply put the package on the porch and left. On the phone was the one person I had played phone tag with the day before regarding my upcoming trip, and I could not put him off. So I gave the pitch for my new book and made an appointment to meet him in Ashland the following Tuesday.

When I hung up, I only had 20 minutes to get to Shippin’ Shack. So I ran for the car, shared the road with all the summertime RV’s putsying along, and still got there with two minutes to spare. That was just enough time to get the UPS label printed and attached to their envelope and my envelope tucked inside before the UPS truck pulled up to start loading. Whew!

It should be in Mount Pleasant, South Carolina, by 10:30 a.m. Monday morning in time for any meetings considering book proposals.

I had intended to write my blog Friday evening or yesterday, but somehow I was brain dead. I just couldn’t make myself sit down at the computer for anything except e-mails. So that’s my excuse for not getting my blog written until today.

Wish me luck on this project! Who knew!

Judy Fleagle spent 22 years teaching 1st and 2nd grades and 21 years as editor/staff writer with Oregon Coast and Northwest Travel magazines.Since 2009, she has written five books: "Crossings: McCullough's Coastal Bridges," "The Crossings Guide to Oregon's Coastal Spans," "Around Florence," "Devil Cat and Other Colorful Animals I Have Known," and "The Oregon Coast Guide to the UNEXPECTED!!!."
View all posts by crossingsauthor →
This entry was posted in Uncategorized and tagged Arcadia Press, chapter summaries, fiction book proposal, history of florence, sepia tone. Bookmark the permalink.