Posted on June 7, 2013 by crossingsauthor

With a new book, I now have a new PowerPoint program. The last one, I gave about 40 times up and down the coast, in Eugene, and as far away as Oregon City in auditoriums, library meeting rooms, homes, and campgrounds. The first one covered the book Crossings: McCullough’s Coastal Bridges, the bridges, and included some old-timer’s stories.

This second one covers the 75th anniversary bridge celebrations in 2011 and the part Crossings and I played in them, how the new book The Crossings Guide to Oregon’s Coastal Spans came about, and stories about hardcore bridge aficionados and how we got such a spectacular cover shot. This presentation will have almost twice as many photos as the first one, including several from two of the major bridge celebrations and all 19 of the bridges in the new book.

The Big Creek Bridge is one of the 19 bridges in The Crossings Guide, and this photo will be a part of the new program.

I didn’t realize I would spend a good chunk of three days working on it. But that’s what it took. I spent much of Sunday on the edit. I had given a 20-minute presentation with no slides back in March. I thought I was done with the edit, that I’d just have to add photos. Ha! I started adding and changing and before I knew it, I had to start cutting.

I had collected photos from several sources and had inserted them as I received them. But after all my edit changes, some needed to be changed around, and I needed to add more. Fortunately, I had those––on my other computer.

Monday I worked on the photos. Since the PowerPoint is on my laptop and all my photos are on my desktop, I had to send each one, as an email attachment. Then I inserted it. I know the process, but it is a process and when you multiply it by 15 or more times, it takes awhile. And, of course, I had to tinker with the edit some more. I simply can’t let well enough alone.

Then I tried to time myself, but I kept stopping to make changes. It took an hour. Much too long. I’d had it. I would let it rest and not look at it for a couple of days. But that night after dinner, I went through it all again and continued making changes––mostly cutting and tightening this time.

Then I did give it a rest until Thursday where I spent hours making more changes and doing more tightening to the edit. But no more photo changes. Then I went through it with both the edit and photos and timed myself with hardly any stops for changes. It lasted 40 minutes. I was getting there! I usually aim for 35 minutes because at about 40 minutes, eyes start to glaze over. So I made a few more tweaks. I was feeling good about it––beginning to like it.

This is my typical writing style. I get it down and start tinkering and more tinkering until there’s a point where I begin to feel satisfied. Well, I’m approaching that. I’ll be doing this new PowerPoint program on July 27 at 3 p.m. at the Eugene Library as part of their summer series of programs. I know that by then, it will be in good shape. I will also present it to the Soroptimists in Gold Beach in October.

Once word gets out, that I have a program––a PowerPoint program with lots of photos, I’ll get some takers. In fact, on Monday after working on it much of the day, I was telling my neighbor about it, and she asked me if I could come and do a program for her group!

The Cape Perpetua scenic recreational area caries my books in the Visitor Center.

Tuesday was spent on Florence Festival of Books stuff. We had a planning committee meeting, and I conducted it, since my co-chair had undergone surgery the day before. So I put together a preliminary budget and an agenda before the meeting and a to-do list afterwards.

Since May 15, when applications became available online for the FFOB, we’ve had 21 come in. With each one, I run it off and send a follow-up letter and sometimes request additional info. And I keep a running tally. So far it breaks down to 20 authors (four sharing tables), 2 publishers, and one group of young authors (6-8 year-olds). We have a limit of about 60 tables and we are at 21 so far. Seems to be on par with last year. I need to get on the phone and get the flyers and posters made and get them out.

The Crossings Guide in the gift shop of the Cape Perpetua Visitor Center.

I also made a trip up to the Cape Perpetua Visitor Center and Mari’s Books in Yachats to deliver more books, and the weather was beautiful. 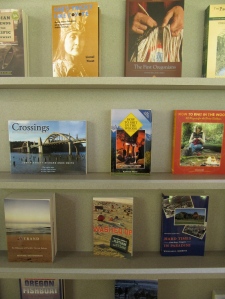 This week, I feel a sense of accomplishment, and it’s been sunny. Life is good!

Judy Fleagle spent 22 years teaching 1st and 2nd grades and 21 years as editor/staff writer with Oregon Coast and Northwest Travel magazines.Since 2009, she has written five books: "Crossings: McCullough's Coastal Bridges," "The Crossings Guide to Oregon's Coastal Spans," "Around Florence," "Devil Cat and Other Colorful Animals I Have Known," and "The Oregon Coast Guide to the UNEXPECTED!!!."
View all posts by crossingsauthor →
This entry was posted in Uncategorized and tagged Big Creek Creek, cape perpetua, Crossings, Mari's Books, mccullough bridges, powerpoint program, The Crossings Guide. Bookmark the permalink.
Loading Comments...
%d bloggers like this: