Writing has been a part of my life for a long time. But this week it hit me that selling my books has also become a part of my life. Each week, I schedule time to make calls or do emails or make trips to sell my books, but it’s the unscheduled just-a-part-of-life sales that have been such a surprise. 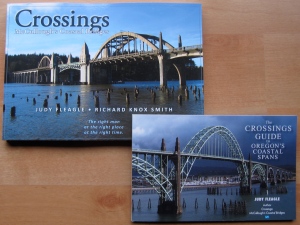 Crossings is usually found on the coffee table or on a bookshelf. The Crossings Guide fits nicely in a pack, purse, or glove compartment.

Just before my trip to California when I took my car to the Toyota dealership to be checked regarding some oil leaks, I ended up selling a copy of each book. And when I took the car over this week to have the engine worked on, I received a check in payment and saw Crossings and The Crossings Guide on the counter for anyone to read. So if you have a Toyota and live in the Eugene area and go to the dealership for service on Goodpasture Road, just ask Kevin Reel about the bridge books and he’ll share them with you.

When I was in California, one of my sister’s friends, whom I’ve also known for about 30 years, wanted to buy a copy of the Guide after I told her about it. This is not unusual. People I know will ask, “What have you been up to lately?” Or if it’s someone I’ve just met, “What do you do living on the coast?” Before you know it, I’m telling them about my books, and they’re reaching for their checkbook.

Here are a few more examples. I took in a clock to be repaired at Creative Clock in Eugene and ended up buying a new clock and selling a copy of Crossings. I took my friend Jan Jett over to buy a new car at the Honda dealership and when she was filling out the paperwork, the salesman turned to me and asked what I do. I told him. He ended up buying a book. And when I went to see my taxman and my dermatologist and when the PestTech guy came to spray for carpenter ants and when Jerry Ward came to clean my chimney, they all ended up buying books. Several times at Freddies (Fred Meyer) I’ve seen someone I haven’t seen for awhile and before you know it, I run out to the car and return with a book that they end up buying. It’s just become a part of my life.

At first, I was astounded that someone would buy a book, just because it came up in conversation. But it has happened so often, I’m almost to the point of being disappointed if they don’t!

Judy Fleagle spent 22 years teaching 1st and 2nd grades and 21 years as editor/staff writer with Oregon Coast and Northwest Travel magazines.Since 2009, she has written five books: "Crossings: McCullough's Coastal Bridges," "The Crossings Guide to Oregon's Coastal Spans," "Around Florence," "Devil Cat and Other Colorful Animals I Have Known," and "The Oregon Coast Guide to the UNEXPECTED!!!."
View all posts by crossingsauthor →
This entry was posted in Uncategorized and tagged bridge books. Bookmark the permalink.