Posted on January 5, 2013 by crossingsauthor

I will continue to market Crossings: McCullough’s Coastal Bridges. Just this morning, I mailed six more books to Powell’s in Portland. And Tillamook Cheese e-mailed that they would like six more also. It’s not the frantic rush of when it first came out; it’s slow but steady. Sometimes, I’ll call several places up or down the coast or in Eugene and just a few or maybe even nobody wants a book. Other times, I’ll receive calls out of the blue .

I used to put hundreds of miles on my car to make presentations and deliver books. I’ve wised up a little. On presentations, I now ask for gas expense money. If I need to spend the night, I ask to have a room comped or paid for. I usually get one or the other and sometimes both. If there are three or more places to deliver, I’ll make the trip, otherwise I’ll mail the books. 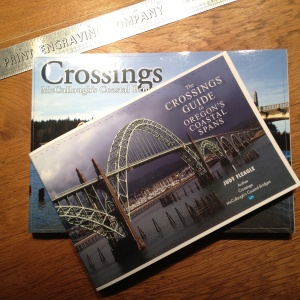 This is a proof copy of The Crossings Guide and the size has not been trimmed yet. It will actually be slightly smaller. And at 48 pages instead of 224, a smaller book than Crossings.

While the second book, The Crossings Guide to Oregon’s Coastal Spans, was at the printer during December, I spent time figuring out the best way to ship both books. They are different sizes. I thought I was out of envelopes, and I had no boxes that would work. So I spent a hunk of money ordering envelopes and four sizes of boxes from Uline catalog.

The boxes I ordered come flat and are scored to make a range of sizes. For example, I needed a box for six Crossings this morning. I selected the largest and folded it on the second line on all four sides. This was the perfect size for six books. I can use this box for 5 to 7 copies. The next size down works for three or four copies. The other two sizes of boxes are for The Crossings Guide––one will hold four to eight books and the other nine to 12 books.

Largest boxes on top of old sewing machine cabinet, three sets of boxes on shelf above (one out of sight), and 400 white envelopes in box under sewing machine.

The bubble envelopes that I ordered can hold two copies of Crossings. In my rearranging of every closet in the house to accommodate all my new stuff, I discovered a box of 400 or so white envelopes that I’ve had for about 15 years that can hold one copy of Crossings and up to three of the Guide.

In order to get these boxes and envelopes at reasonable prices, I had to order at least 100 of each. I had no idea how much room they would take up. What a surprise when five large, heavy boxes arrived—a surprise for both me and the UPS driver who has been delivering the occasional  package to me for the past 20 years. For more than a week, my office looked like I was moving. I finally got a sewing closet cleaned out and now it holds some sewing stuff and still a couple of file cabinets, but every other space, including up nearly to the ceiling is filled with flattened boxes. And the large square box with the 100 bubble envelopes is in my bedroom closet. Who knew! 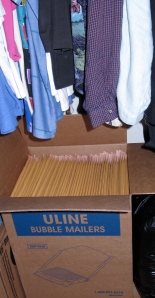 Large box of 100 bubble envelopes is now sharing space in my closet with my clothes.

At last! The Crossings Guide is on its way—all 1,000 copies. They were shipped yesterday and should arrive one day next week.  Since I’ve done some pre-selling, I have 30 places wanting specific numbers of copies and a similar number wanting to order some after they arrive as well as about 40 individuals who have signed up to be notified when the books are available. Now is the calm before the storm.

It will be a frantic rush for a few months of contacting individuals and businesses, delivering books, and doing a totally reworked presentation that will dwell mostly on The Crossings Guide. It will be exciting and thrilling. And best of all, I’ll know what I’m doing. It’ll still be a learning curve, but not nearly as steep as before.

The third book is one I started working on 35 years ago. It will have nothing to do with bridges. (Surprise, surprise!! I can hear you now, “What! How can that be!”) It’ll be about cats and dogs I’ve known—mostly pets and all except one were rescue animals. At this point, I think it’ll be in the form of a chapbook––not as expensive. Of course, plans can change. These stories have been written over the years and some have photos (mostly slides or prints) and some don’t. I’ll have some rewriting to do, as it will have been several years since I’ve seen some of these stories. I’ll also have to round up some photos of the ones where I don’t have any.

Some of the animal stories I hope to put together in my third book with some photos.

This book means a lot to me because these animal stories were my first attempts at writing. As I look back, I can see that writing these were a means of escape during times when my life was going into a tailspin. At least, this is true of the first few. The later ones, I did because I had the first ones and thought that I might do something with the whole bunch  someday. Chapter titles will be something like “A Flash of White,” “Black like a Shadow,” and “Shades of Gray.” Notice each title has a color.  I’ve got ideas for the book’s title too. So this is a work that will soon be in progress. 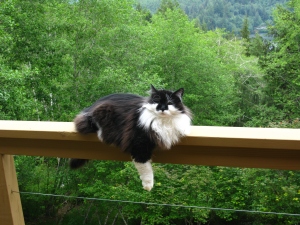 Groucho perched on the railing three stories up is perfectly balanced. His story will be in the third book––”Black and White, Yet Colorful All Over.”

And once more I will be involved with the Florence Festival of Books between May and the end of September.

Like I said––three books and a book fair! Kinda says it all!

Crossings: McCullough’s Coastal Bridges can be yours for $24.95 plus $4.99 shipping. Order from Pacific Publishing at http://www.connectflorence.com or pacpub@oregonfast.net. It is also available on the coast in bookstores, museums, and gift shops; in Eugene at the airport, the historical museum, and several bookstores; in Portland at Powell’s and the Oregon Historical Society; in Made in Oregon stores throughout the state; and more and more bookstores, libraries, and museums in western Oregon. This book makes a good coffee-table book. 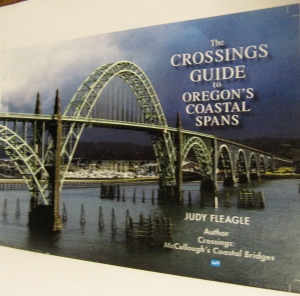 The second book The Crossings Guide to Oregon’s Coastal Spans––covers 15 bridges and has at least one color and one historic photo for each bridge. The cost is $15 plus shipping. This sturdy guide is also published through Pacific Publishing. It belongs in your car; don’t drive 101 without it.

Judy Fleagle spent 22 years teaching 1st and 2nd grades and 21 years as editor/staff writer with Oregon Coast and Northwest Travel magazines.Since 2009, she has written five books: "Crossings: McCullough's Coastal Bridges," "The Crossings Guide to Oregon's Coastal Spans," "Around Florence," "Devil Cat and Other Colorful Animals I Have Known," and "The Oregon Coast Guide to the UNEXPECTED!!!."
View all posts by crossingsauthor →
This entry was posted in Uncategorized and tagged books, Marketing, writing. Bookmark the permalink.