Posted on November 30, 2012 by crossingsauthor

On Tuesday, I read through The Crossings Guide to Oregon’s Coastal Spans and found no more mistakes––finally a “clean copy.” On Thursday, town dignitaries finally broke ground on the Siuslaw River Bridge Interpretive Center/Wayside after being in the works for a decade. And on Friday, The Crossings Guide was finally pronounced “camera ready” and sent to the printer.

Tuesday––After two weeks of back and forth, back and forth, I thought we were done. We had gone through the edit and checked everything over and over. I was sure I had found every single misspelling, incorrect number, and unnecessary dash and comma. But no, I found another mistake on Sunday and two more on Monday.

Transposed numbers can cause big problems.

I couldn’t believe it. The last milepost listing, which had been copied from a reliable source, was so obviously wrong that anyone could’ve spotted it that knew that from one end of Hwy 101 to the other in Oregon is 363 miles. The Thomas Creek Bridge was listed at MP 374.8. That would have put it in California! How could I let that through? 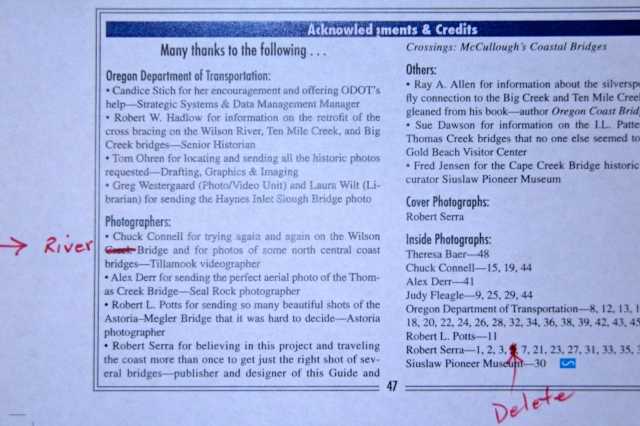 Next to last page had two mistakes, and I’d checked it over and over.

Then on Monday afternoon, I had made it to page 47 in our 48- page book without finding anything. I was ready to celebrate, until I saw two mistakes on page 47. One was “Wilson Creek Bridge ” instead of Wilson River Bridge. I also saw that I had Bob down for doing all the photos on the Contents page—not so. I nearly cried. I had gone over these pages again and again. I could tell that Bob, normally a very patient man, was beginning to loose it. So, needless to say, he was very pleased—as was I—when I saw no changes on Tuesday morning and we could finally pronounce it a “clean copy.”

Then he fell sick and was unable to get into the office for a couple of days. More delay. 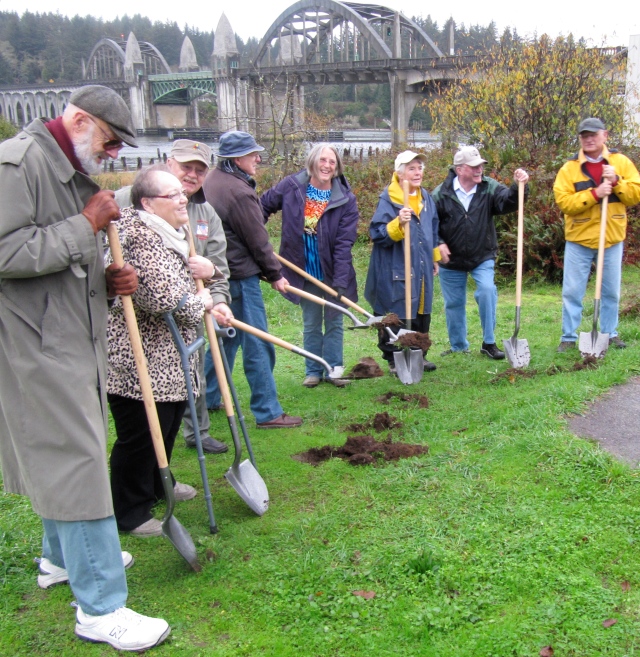 Thursday––At 9 o’clock sharp townspeople gathered in the drizzle to watch town dignitaries with shovels do a ceremonial groundbreaking for the Siuslaw River Bridge Interpretive Wayside. Besides Mayor Phil Brubaker (in the yellow jacket), some town council members, and a few others, Dick Smith was there wielding a shovel. (Dick has on a blue hat.) He had been at the opening dedication celebration of the Siuslaw River Bridge way back in 1936 as a 13-year old member of the Boy Scouts drum-and-bugle corps from Cottage Grove. He remembers walking across the bridge that day.

This interpretive center/wayside project has been in the works for the past decade and has gone through many changes as funds began to shrink. It began as an interpretive center that would be located on ODOT property under the bridge. As soon as plans changed to other nearby property between the Waterfront Depot restaurant and Siuslaw River Coffee Roasters coffee shop, it became a joint venture between the city of Florence and ODOT. And the property, the last piece of Bay Street fronting on the river, was tied up in an estate sale with numerous parties involved.

This Siuslaw River Bridge Interpretive Wayside will fill the last riverfront space on Bay Street and preserve our access to the river and the fabulous view of the bridge.

Although the wayside plans were drawn in 2008, it was 2010 before everyone had signed off on the sale to the city. And yesterday, November 29, 2012, the groundbreaking took place, finally, marking the beginning of the actual building of the interpretive wayside. According to the mayor, it should be ready by next summer.

Friday––I received a call from Bob this morning with all of his vigor revived. He had given his assistant, Patrick, the final version of The Crossings Guide Thursday afternoon. And Patrick had prepared it in a PDF file to upload to our printer, Color House Graphics, in Grand Rapids, Michigan. He had worked until 1 a.m. before sending it to Bob for a final check. Bob had gone through it this morning and sent it on to me with his noted changes.

In this final preparation process, sometimes formatting changes happen. On one page, I found the space between lines was too large, and Bob found a few things. The whole file went back and forth a second time, and we both checked every page again. Bob found more—mostly having to do with column alignment and lines around photos. But he also found a small connecting word “on” that should have been “of” and an unnecessary dash. Patrick made all the changes, and we saw the corrected pages. Finally, we pronounced The Crossings Guide “clean.” So Patrick was able to finish the preparation and send it “camera ready.”

Sometime next week, we should receive a proof copy and have a chance to go through it one more time before we approve 1,000 copies be printed.

Three times this week, I got to say, “Finally!” And that’s a very good feeling!

The second book The Crossings Guide to Oregon’s Coastal Spans––will cover 15 bridges and have at least one color and one historic photo for each bridge. The cost will be $15 plus shipping. This sturdy guide will also be published through Pacific Publishing. When heading for the coast, don’t drive 101 without it.

Judy Fleagle spent 22 years teaching 1st and 2nd grades and 21 years as editor/staff writer with Oregon Coast and Northwest Travel magazines.Since 2009, she has written five books: "Crossings: McCullough's Coastal Bridges," "The Crossings Guide to Oregon's Coastal Spans," "Around Florence," "Devil Cat and Other Colorful Animals I Have Known," and "The Oregon Coast Guide to the UNEXPECTED!!!."
View all posts by crossingsauthor →
This entry was posted in Uncategorized and tagged mccullough bridges, siuslaw river bridge, travel. Bookmark the permalink.
Loading Comments...
%d bloggers like this: