Posted on November 24, 2012 by crossingsauthor

In the beginning was the blog, where for 52 weeks, I wrote about my adventures with the book Crossings: McCullough’s Coastal Bridges. I posted every week except Christmas. Four weeks were filler postings because I was away or stuck at home due to the weather and had no book adventures. The first time I had nothing to write about, I didn’t know what to write. Then it hit me––write about each one of the McCullough bridges. Now, it seems like such a no-brainer! What else could I write about so easily.

I simply went down the coast north to south and selected groups of three for each posting. I titled them Experiencing McCullough Bridges, 1st of 4, 2nd of 4, etc. You get the picture. Not exactly compelling titles! 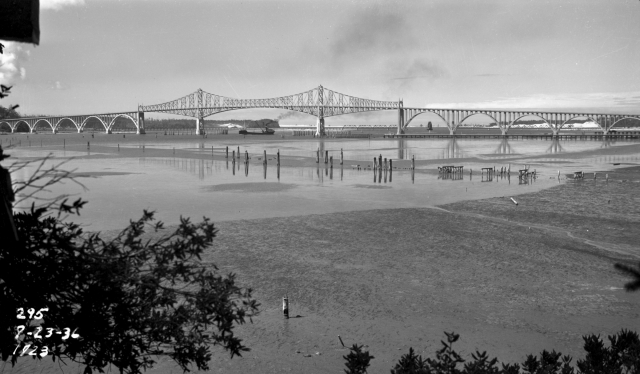 The Coos Bay Bridge is now called the McCullough Memorial Bridge. It was the longest bridge in Oregon in 1936 and still is that is totally within the state, circa 1936. ––ODOT Photo

The first, #35, was last January. I was stuck at home because of horrendous weather and power outages. I wrote two or three paragraphs each about Wilson River, Depoe Bay, and Rocky Creek bridges. The second, #38, was last February and by then I was using photos. I wrote it ahead of time and posted from the South Coast Writer’s Conference in Gold Beach. I wrote a large paragraph each about Yaquina Bay, Cummins Creek, and Ten Mile Creek bridges. The third and fourth was last April, I also wrote these ahead and posted from California while visiting family and friends. On #46, I wrote two paragraphs each about Big Creek, Cape Creek, and Siuslaw River bridges. By the fourth one, #47, I was realy on a roll and each bridge received three paragraphs––Umpqua River, McCullough Memorial, and I.L. Patterson bridges.

Looking back, I can see that writing about each bridge turned out to be one of my better ideas. I’ve received a lot of positive feedback, and these are among the most popular blog postings, still being clicked on months after their original postings.

After about 45 postings, friends suggested I turn the blog into a book on marketing your first book. I thought about it and figured I could take about 30 weeks worth to make a decent book. While selecting which ones, I noticed the four bridge fillers. And a light bulb lit up.

Here was my thinking: Why not put those four into a book––a small guidebook? That would be yet another book, but it would be easier. Putting together four of something is a lot easier than dealing with 30. I could do the guidebook first.

The idea really took hold. It would be a guide to bridges along the Oregon coast. I could just picture it––stiff covers, spiral bound so you could flip it back upon itself, vertical with small pictures, about 32 pages. Looking through my bookcases, I even found an example of the kind of guide I wanted.

I took my idea and the other guide to Bob Serra at Pacific Publishing, my Crossings publisher. He thought it was such a good idea, he got a printing quote within a few days. So blame this book on him. If he’d been against it, it wouldn’t have happened.

This is my photo of the Cummins Creek Bridge that is being used in the Guide, but most of the others are much higher quality. Since I only paid for one-time use, you can only see them in the Guide.

After that, I got right on it and started verifying what I’d written and doing more research and adding text to each of those McCullough dozen and taking and acquiring photos––both historic and present day. Then I decided to add three more bridges because of their importance—the Astoria–Megler, the longest in the state; the new Alsea Bay Bridge, the only major coastal McCullough bridge to be replaced; and the Thomas Creek Bridge, the highest in the state. I’d also need photos for these. Dick Smith, my cohort on Crossings, encouraged me as well and made a few suggestions. I was really jazzed.

I had to research the three non-McCullough bridges and contact photographers for present day color photos. Fortunately, I have good contacts from my days at Oregon Coast magazine. And I let my contact at ODOT, Candice Stich, know what I was up to. She also encouraged me and offered the services of ODOT. And from time to time I sent research questions and photo requests, and they came through each time.

You can see the entire 4-mile brand new Astoria–Megler Bridge and how it corkscrews around and up and over Astoria on it’s way to crossing the Columbia River to Washington., circa 1966. ––ODOT Photo

Then I got interrupted by trips up to the north coast in May and to southern Oregon in June  to market Crossings and to California for 11 days in July for my mom’s 100th birthday. And I became bogged down in the responsibilities of being the chairperson for the Florence Festival of Books from May through first week in October. And Bob, who publishes the telephone book for the Central Coast has his busy time from spring through early fall. So it was August before I had the text completed and October before he had time to take photos (including the cover) and do the editing, lay out and design, etc.

So during these past five weeks, we’ve both become totally involved with this Guide and made numerous changes. Some of these were based on Bob’s research of guidebooks in bookstores. The end result, it would not be vertical spiral-bound, after-all; it would stay small but be horizontal perfect-bound—like Crossings. And it would be 48 sturdy pages in color with emphasis on the color photos. It would also cover––very briefly––four of the newest bridges because of their return to a McCullough-like elegance. And the book’s title changed at least four times.

The cover. This is a photo of a photocopy on copy paper. The actual cover will be much richer in color when it’s printed on thick book cover stock. ––Bob Serra Photo

Since we wanted it ready for holiday sales, we’ve had to really scramble these past couple weeks since Bob got the first draft of the fully designed book to me. Then the back and forth process of getting all the changes made to create a “clean copy.” Every time I went through it, I thought I’d found everything. But the next time, I’d find more. Bob gave it another go through and made some final formatting changes and gave it to me the day before Thanksgiving. I’ll give it one more go through this weekend before returning it to him on Monday.

Bob’s taken care of getting the ISBN number and other legalities and has been in contact with the printer. We received paper samples the day before Thanksgiving, so we could make final decisions on quality and thickness of the paper for both cover and text. The plan is to send it to the printer camera ready this coming Monday. After a few days, we should receive a proof copy. At that point, we’ll go through it carefully one last time. Although we are in hurry-up mode, we don’t want to rush it. We don’t want to see any mistakes or have any surprises when 1,000 copies show up in a few weeks!

That’s a lot of books, but since August, I’ve been doing some pre-selling. So I don’t think we’ll have any trouble selling The Crossings Guide to Oregon’s Coastal Spans. . . . How many copies did you say you wanted?

This cover is also a Bob Serra photo.

The second book The Crossings Guide to Oregon’s Coastal Spans––will cover 15 bridges and have at least one color and one historic photo for each bridge. The cost will be $15 plus shipping. This book will also be published through Pacific Publishing. This sturdy guide will travel well. When heading for the coast, don’t drive 101 without it.

February 9, 9–5, Bridge Tour, Outward Ventures, Florence campus, Lane Community College––This bridge tour includes 12 bridges with many stops from Depoe Bay to Coos Bay and has a lunch stop at a fabulous restaurant in Depoe Bay. Once the new catalogs are out, sign up at the Florence campus or online. A fee will be involved. I will be the bridge tour guide. This will be such fun; I can hardly wait!