Posted on November 10, 2012 by crossingsauthor

Two and a half weeks later and it still feels like there’s something on my face. But there’s nothing there when I reach for it.

This past week marked 2 /12 weeks since surgery, a long-scheduled presentation, and my birthday.

Two and a half weeks past melanoma surgery and I’m looking good enough that people don’t really notice unless I mention it—especially if it’s head-on with  glasses. I never knew what it was like to have a good side and bad side before. 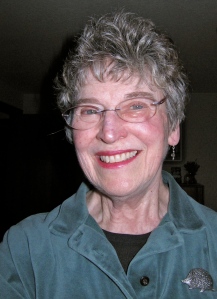 Last Tuesday I gave a presentation to a second PEO group here in Florence at the home of a friend. There were about 25 present and it went just fine. Since it was only to be 20-minutes, I didn’t do the PowerPoint. Too bad, with a PowerPoint presentation, you can dim the lights and focus attention on the photos on the screen. Without PowerPoint, it was bright lights and focused on me. It went well,  and there was only one surgery-related problem. The swelling below my one eye still affected my vision when looking down and trying to read a script. I had to hold it up  in order to see it well enough to read with both eyes. That was a surprise.

Without the PowerPoint, I hand held photos for the audience to see and passed them around. One photo showed  McCullough’s sketches of the five bridges drawn a year before any of them were begun. Today, the four bridges still standing look exactly like those sketches of October 1933. 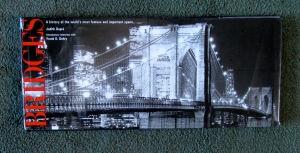 McCullough and his bridges are covered in this book that covers the world’s most famous and important spans.

And I passed around Bridges: A History of the World’s Most Famous and Important Spans by Judith Dupre. The book covers the bridges of Conde B. McCullough and has a large photo of the Siuslaw River Bridge because it best represents McCullough bridges. This always impresses audiences—especially Florence audiences.

In Bridges, the Siuslaw River Bridge photo is the main photo used to represent McCullough bridges.

The audience was attentive and had questions afterward, and I even sold a few books.  I also got a few sign-ups for the new book––The Crossings Guide to Oregon’s Coastal Spans.

On Thursday, I received a great birthday present from ODOT. When I checked my email, there was a terrific photo of the Haynes Inlet Bridge. I had given up when I was told that they didn’t have any available to send. But one of the fellows in the video department thought there was one somewhere. Unbeknownst to me, he continued looking until he found it. I was so pleased to get a photo that shows the whole bridge with all three arches. The one we have is a lovely photo, but shows only portions of two arches. So I sent the new photo on to my publisher, Bob Serra of Pacific Publishing, the same publisher that we used with Crossings.

Another birthday present was a purchase order from Powell’s ordering six more books. When I confirmed the order and added an FYI about the new book, the response was that they were indeed interested and to let them know the ISBN number and price as soon as possible, so they could enter it in their database. Yippee!

Then the next day I met with Bob, and received the best present of all––The Crossings Guide in its first draft with all pages laid out. There was the cover and all 48 pages with text and photos where they are supposed to go, including the Haynes Inlet Bridge photo. It was my first glimpse of the cover or of any of it laid out.

On October 22, the day before my face surgery, I had given Bob the file of photocopies of all photos noting where each belonged with credits and captions and the disks where they could be found as well as sending all emails with photos for the book. Now that everything has been put together, it’s my turn again. At this stage of production, I’ll be the editor and go through every word and photo and check everything. This is the exciting part when months of work all come together, and for the first time, it’s actually looking like a book.

The I.L. Patterson Bridge crosses the Rogue River at Gold Beach. Each bridge covered in the book will have a color photo, edit, and at least one historic photo.

The second book The Crossings Guide to Oregon’s Coastal Spans––will cover 15 bridges and have at least one color and one historic photo for each one. The cost will probably be $15 plus shipping. This book will also be published through Pacific Publishing. This guide with its sturdy cover will travel well. When heading for the coast, don’t drive 101 without it.

February 9, 9–5, Bridge Tour, Outward Ventures, Florence campus, Lane Community College––This bridge tour includes 12 bridges with many stops from Depoe Bay to Coos Bay and has a lunch stop at a fabulous restaurant in Depoe Bay. Once the new catalogs are out, sign up at the Florence campus or online. A fee will be involved. I will be the bridge tour guide.

Judy Fleagle spent 22 years teaching 1st and 2nd grades and 21 years as editor/staff writer with Oregon Coast and Northwest Travel magazines.Since 2009, she has written five books: "Crossings: McCullough's Coastal Bridges," "The Crossings Guide to Oregon's Coastal Spans," "Around Florence," "Devil Cat and Other Colorful Animals I Have Known," and "The Oregon Coast Guide to the UNEXPECTED!!!."
View all posts by crossingsauthor →
This entry was posted in Uncategorized and tagged conde mccullough, four bridges, mccullough bridges, Photo, sea lion caves. Bookmark the permalink.