Posted on October 6, 2012 by crossingsauthor

The weather was sunny and warm last Saturday at the Florence Festival of Books held at the Florence Events Center. Folks selling books as well as those buying had a good time. It was laid-back and enjoyable because of the months of preparation beforehand.

Everyone seems to be enjoying themselves. Here children’s author, Kurt Cyrus, displays his beautifully illustrated books.

Many types of books were on sale with their authors ready to sign copies, several volunteers were ready to help both participants and attendees, and there were plenty of food choices in the lobby when anyone wanted a break. 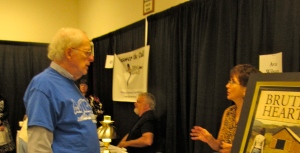 You could spot the Festival volunteers and planning committee members by their blue T-shirts with the festival logo. Volunteers manned the welcome table and the credit card table, answered questions, procured this and that, and table-sat so booksellers could take a break now and then.

Juline Walker, the teacher/advisor of the high school Key Club, worked right along with several students unloading and loading boxes of books.

Before the Festival opened to the public, high school students belonging to the Key Club were there to help the 80 participants bring in their boxes of books and promotional materials and were back at the end of the day to help load up. All in all it was a big success––362 attended.

Here I am with Dr. Veronica Esagui, the person who interviews authors on the “Author’s Forum” TV show in the Portland area.

As the co-chair, I was very pleased with how it all turned out. The hard work of the committee that began last April had paid off. Although, I was co-chair, my other half could only be at the first two meetings in April and May. Because her husband became seriously ill later in May and has been in the hospital most of the time since, my role became that of chairperson. Fortunately, my co-chair’s husband has gotten better in the past few weeks and she was able to attend the Festival. 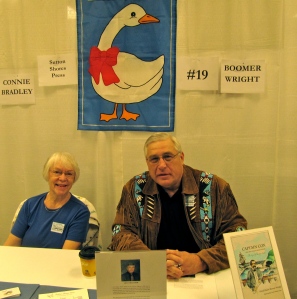 We had basically the same committee as last year with one addition––Karen Nichols. She was the artist that designed our logo last year. Since it was our second time around, we knew what we were doing. This year we met about twice a month instead of every week like we did last year. The T-shirts were new this year and definitely made it easier to spot volunteers.

In May, one committee member sent notices to about 700 authors, which included some publishers, to “save the date.” Another member got the application set up for easy downloading on the Florence Events Center website. In June, as the applications and fees started coming in to the Events Center, I sent a follow-up letter to each one and answered questions.

From July on, I wrote and sent press releases every couple weeks. The early ones were aimed at authors and publishers and later ones at readers. We had access to the Events Center media list, so they went to radio, TV, and newspapers all over Oregon and southwestern Washington. The local newspaper and radio had different press releases with the last few focusing on local authors and publishers attending the Festival.

I ordered flyers and posters and mailed them to bookstores, libraries, and visitor centers on the north and south coasts. I sent a large packet to Portland where we paid to be on an online newsletter and to have the flyers delivered throughout southwestern Washington, Portland, and Salem. One of our committee members delivered flyers and posters in Eugene. I delivered to towns as far north as Newport, and in Coos Bay, Charleston, and Bandon. Another member covered Gardiner, Reedsport, and North Bend, and all of us plastered Florence with them. I also delivered flyers last May in Grants Pass, Medford, and Ashland when I was placing my book Crossings: McCullough’s Coastal Bridges in colleges, libraries, and bookstores. Three of us were either recorded or had live interviews on various radio stations.  We also paid to have repeated messages on two coastal radio stations. So we really worked to get the word out. 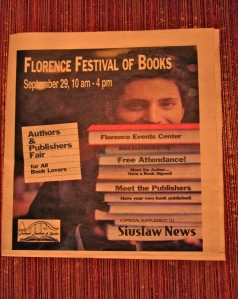 Here is our wonderful eight-page insert that was a part of the Siuslaw News. It was also the program the day of the Festival.

When the newspaper called to ask if they could come to a meeting of the planning committee to present a proposal about an insert in the paper regarding the Festival, we felt we’d made the “big time!” This only happens for big events like Rhododendron Days, Winter Folk Festival, and the Home and Garden Show that have been going on for years. The insert’s centerfold would have the layout of numbered tables with the list of authors and publishers alongside. I would write a welcome letter and a brief history of how the event began and the rest would be ads from participating authors and publishers.  It came out exactly as planned with about 23 Festival participants buying ads. I bought one for my new book, and Dick Smith and I split the cost for one for Crossings.

There was a cost to us for the insert, but it also included three ads in the newspaper. Besides appearing in the local paper a few days before the event, we would receive enough extras to pass out to each participant and attendee as they came in the door. It would be our program.

It’s about 9:30 a.m. and the public is allowed in at 10 a.m. Last minute preparations are underway by participants and committee member Jan Jett is there to provide help.

Because we wanted each author and publisher to have plenty of space, we offered six-foot and eight-foot tables and allowed sharing on the larger ones with fees of $30, $35, or $50. We had a stated limit of 60 tables, although we actually had more. As the applications and fees came in, I kept a running total of tables and money. We wanted to be able to cover our expenses and not go over our limit on tables. It was expensive to rent the Events Center, but it included all their tables and equipment, staff to handle applications and to set up and take down the tables and curtained dividers prior to and after the event, everything needed to handle credit card purchases, and the friends group to handle the money as it came in and pay bills when requested.

On the day of our deadline for applications, number 60 called the Events Center that morning and so did 61. That day two of us from the committee met with Kevin Rhodes the Event Center’s director, and gave him the totals for both table sizes. After we received a blank table layout, we filled in the names. The table assignments were set. Or so we thought. On Tuesday night, I received a call from someone wanting to come. On Wednesday, we noticed a couple of six-footers assigned to eight-footers on the layout, and someone else called wanting to come. So we made changes, which added two more tables, and then proofed the list for any spelling errors and sent it to the newspaper for the insert.

The following Monday, I picked up the 500 or so copies of the insert. We had received three more calls, but put these folks on a waiting list. Then that night I received a call from a local elementary teacher saying that 18 six to ten year-olds would be at the Festival with books they had published. We had been trying to get the schools involved, but didn’t think we had any takers! Apparently, we were wrong. And the next morning I received a call from someone I had hoped would be there. They thought they had sent in their appication but had not. But they did have motel reservations. So I went to our last meeting before the event in somewhat of a panic.

We decided to add two tables for the kids and have them come in three two-hour shifts of six each and to add another table for the other person with the motel reservations. That made 66 tables. Kevin said it was no problem to make the changes, although they would not be in the insert. When I got home, I had a message that the kids wouldn’t be coming after all because their books would not come from the printer until the following week. I emailed Kevin, and once again he made a change. 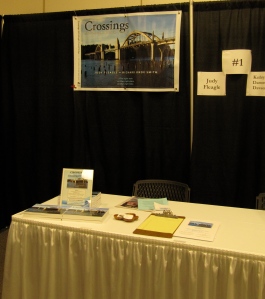 After passing out everything, I got my table ready the day before.

The day before the Festival, committee members were at the Events Center sticking labels with our logo on the tote bags that every attendee would receive, placing the numbers and names on the correct tables, and passing out to each table a packet containing a welcome letter, Events Center policy sheet, name tag, and forms for credit card sales.

Bob Welch, popular columnist with the Eugene Register-Guard with one of his new books.

On the day of the Festival, as a participating author, I sold 10 books and got 16 signups for my new one due out in December. I took a break to visit other tables and traded my book for three others that I wanted from other authors and bought one. I was astounded at the variety and quality of the books. There was mystery, romance, fantasy, memoir, history, historical fiction, trail guides, non-fiction, children’s books, and more. I have to say that I had a great time both as bookseller and book buyer.

We passed out evaluations an hour before the Festival ended and received good feedback. Everyone was pleased with the organization and the volunteers, and there were good ideas to make it even better next year.

Next year, it will again be on the last Saturday in September. So mark your calendars. See you there!

The second book The CROSSINGS Guide to Oregon’s Coastal Spans––will cover 15 bridges and have at least one color and one historic photo for each one. The cost will be $10 + $3 shipping. This book will also be published through Pacific Publishing. This sturdy covered, spiral bound guide will travel well. When heading for the coast, don’t leave home without it.

October 13, 11 a.m., Historic Arch Bridge Reopening, Oregon City––The historic Arch Bridge designed by McCullough reopens in Oregon City on the weekend of October 13­14. I have been asked to be part of the festivities and will be giving my PowerPoint presentation at the Museum of the Oregon Territory on Saturday. The actual bridge reopening celebration will be on Sunday, and I’ll be there.

November 6, 5:30 p.m., PEO Meeting, private home––Twenty-minute talk on the book and the part it played in the 75th anniversary celebrations of 2011. Only open to PEO members.

Judy Fleagle spent 22 years teaching 1st and 2nd grades and 21 years as editor/staff writer with Oregon Coast and Northwest Travel magazines.Since 2009, she has written five books: "Crossings: McCullough's Coastal Bridges," "The Crossings Guide to Oregon's Coastal Spans," "Around Florence," "Devil Cat and Other Colorful Animals I Have Known," and "The Oregon Coast Guide to the UNEXPECTED!!!."
View all posts by crossingsauthor →
This entry was posted in Uncategorized and tagged festival volunteers, florence events center, high school key club. Bookmark the permalink.