Posted on August 25, 2012 by crossingsauthor

Last year at this time, my blog titles ––“Taken over my life,”  “Every which way,” “Company or not,”––described how Crossings: McCullough’s Coastal Bridges really had taken over my life.

Last year I was here, there, and everywhere promoting Crossings. This shot was taken July 2011 in Coos Bay.

This year I remain busy, but my time is divided between being the chair person of the Florence Festival of Books (FFOB) committee, getting my second book––Oregon’s Coastal Bridges: A guide to the most famous and impressive spans––ready, and marketing Crossings.

This week is a good example.

Sunday, Aug 19—I finally finished the edit for my Guide. I thought I had finished a week or so earlier. But yesterday when I was fact-checking each bridge, I realized there were four bridges built within the past dozen years that show a return to elegance reminiscent of McCullough. I simply had to include those. So I did briefly. It ended the book on a high note, which I liked.

Then I updated my list of bookstores and libraries, where Crossings is found to help in getting the word out about FFOB. That took quite awhile.

Afterwards, I talked to the gal in charge of the Key Club (a Kiwanis sponsored group of high school students involved in community service) about having the kids help out at this year’s FFOB. Last year the participating author’s loved having high school kids meet them as they drove up, carry their boxes of books inside, and show them where their table was located. They will be doing it again this year.

Monday, Aug 20—All day was devoted to cleaning house and doing laundry. But  I still managed to e-mail back and forth with Tom Ohren at ODOT regarding historic photos for five bridges for my Guide and Alex Derr regarding use of one of his fabulous color aerial photos of the Thomas Creek Bridge.

You can’t just walk up and take a photo of this tall bridge. It’s the tallest in Oregon. From a trail right below the road deck, the legs just disappear down into the foliage. And from farther below, they disappear up into the foliage. Unless you are 345 feet below, standing by the creek, you can’t see the whole legs. The best shots to see the entire bridge are from a boat or a plane on or out over the ocean. And that’s what I’ll be using.

Tuesday, Aug 21––I called libraries and bookstores at the southern and northern ends of the coast to alert them that I would be mailing FFOB flyers. On the south coast, I sent one package divided into four packets for the four libraries in Langlois, Port Orford, Gold Beach, and Brookings. They will see that they get distributed. But on the north coast, I sent separate packets to Astoria and Seaside libraries. (Next week I’ll call Cannon Beach and Tillamook.) I sent a large packet to Beyond 50 Radio in Portland because they will be advertising the FFOB in their online newsletter. For very little more cost, they will also distribute flyers to venues in the Portland Metro area, SW Washington, and Salem.  Then I went to town and mailed these packages. I also sent a copy of Crossings to Alex, the aerial photographer, as part of the terms worked out in using his photo.

Wednesday, Aug 22––Talked to Robert L. Potts, one of the best of the best of coastal photographers, by phone regarding use of one of his photos of the Astoria-Megler Bridge across the Columbia for my Guide.

After being on duty as a docent at the Siuslaw Pioneer Museum all afternoon, I stopped by the Siuslaw News office and dropped off a copy of the FFOB flyer to be used in an ad in the newspaper (one of three we’ll be running) and a stack of flyers to pass out. While there, I proofed an ad I bought for the special supplement the newspaper will run just prior to the FFOB that will be devoted totally to the event. This ad is one I’m paying for about my new book that will be coming out early in December.

I received a disk in the mail with the historic photos from ODOT. So after dinner, I popped up each one of the 64 photos and made decisions on which to use for my Guide. I loved the shot of a barge carrying a steel road segment that was a few stories tall and much wider than the barge was long. The barge had traveled downriver slowly with this humongous load. I also liked the shots of huge storm waves very close to the Rocky Creek Bridge while under construction, and the newly built Wilson River Bridge completely surrounded by floodwaters, an every few years occurrence in this part of Tillamook. To me, these are the types of shots that make a book more interesting. I’m so pleased to have them.

Thursday, Aug 23––I spent a lot of time on FFOB paperwork, making the 59 participants listed alphabetically match all the numbers I have of how many are having six-foot tables and eight-foot tables and how many are sharing and how much money is in. Took me awhile, but I finally got everything to tally. My problem had been that I had not removed the three that would not be attending and whose money had been refunded.

Every time someone signs up at the events center, a copy of the application is sent to me. I then send a follow-up letter to the participant, give the info to the newspaper so that person will be able to buy an ad in the supplement if they want, and add their name to my list and update all the totals.

Then I went through my entire Guide manuscript and fine-tuned it. I also received Robert Potts shots of the Astoria-Megler Bridge. It wasn’t easy, but I narrowed it down to one beautiful color shot. It’s gorgeous! I love it! 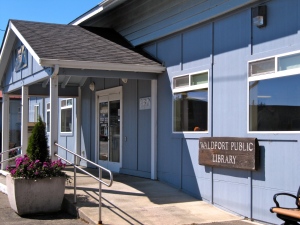 The Waldport Public Library is near the center of town. They have Crossings in their collection and support the Florence Festival of Books.

I received two calls regarding needing books in Waldport. So I called bookstores and libraries and one chamber in Yachats, Waldport, and Newport regarding needing copies of Crossings and asking if I could bring some FFOB flyers and posters, since I would be in their area delivering books. Then I planned my trip. 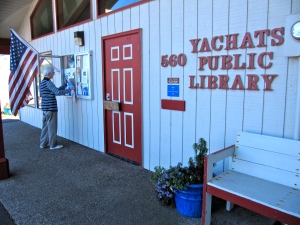 The gal on duty at the Yachats Public Library is putting up the poster about the FFOB. They also have Crossings in their collection.

Friday, Aug 24––I had to be home in the morning for a conference call where all my family in Bakersfield, California, would be at our attorney’s office taking care of various aspects of a trust for my mom. After that, I headed up the coast. It was about 70 degrees and spectacularly beautiful but very windy. One of those, sandblasted at the beach days. Since it’s August at the Oregon coast, there was also lots of traffic—RV traffic—so I didn’t break any speed records. 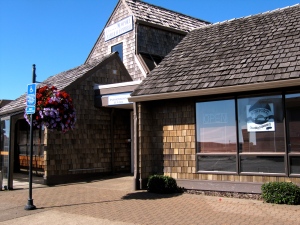 The Newport Area Chamber of Commerce is right on Hwy 101 near the southern end of town. They are also very supportive and put up the poster and have our flyers about the FFOB.

In Yachats, I only stopped at the library. In Waldport, I stopped at the library, Well-Read Books, the Chamber located in the Historic Alsea Bay Bridge Interpretive Center, and the historical museum. In Newport, I stopped at Canyonway, Nye Beach Book House, the chamber, and the library. At each stop I dropped off flyers and posters and at the chamber and museum in Waldport, I also delivered books. While at the Newport Chamber, I worked out how to get the photos they have about last year’s celebration of the 75th anniversary of the Yaquina Bay Bridge. I plan to use some of them in my third book. That one will be about my year’s adventures of marketing Crossings––a how-to through my experiences.

Well, there you have it! While the FFOB and both books keep me busy, I still have time for a life. And that’s the way I like it.

October 13, 11 a.m. Oregon City––The historic Arch Bridge designed by McCullough reopens in Oregon City on the weekend of October 13­14. I have been asked to be part of the festivities and will be giving my PowerPoint presentation at the Museum of the Oregon Territory on Saturday. The actual bridge reopening celebration will be on Sunday, and I’ll be there.

Judy Fleagle spent 22 years teaching 1st and 2nd grades and 21 years as editor/staff writer with Oregon Coast and Northwest Travel magazines.Since 2009, she has written five books: "Crossings: McCullough's Coastal Bridges," "The Crossings Guide to Oregon's Coastal Spans," "Around Florence," "Devil Cat and Other Colorful Animals I Have Known," and "The Oregon Coast Guide to the UNEXPECTED!!!."
View all posts by crossingsauthor →
This entry was posted in Uncategorized and tagged four bridges, high school kids, thomas creek bridge, travel. Bookmark the permalink.
%d bloggers like this: