Posted on August 11, 2012 by crossingsauthor

On Friday, I finished the edit for my second book a Travel Guide to the Major Coastal Bridges of Oregon. My first draft is ready to fine tune. And that’s the part I enjoy most. I’m just glad my creative vomit is all out—all done. I feel much better. 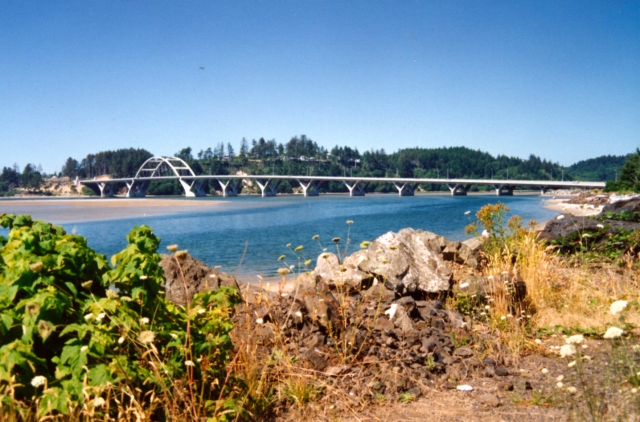 I finished the last segment for my second book. It was about the new Alsea Bay Bridge.

I wrote one segment Thursday and the last segment Friday. I had errands and an eye appointment in the morning, where my eyes would be dilated. Even so, I knew I would finish the book yesterday. I awoke writing the last segment in my head. It must have been what I was dreaming about as my clock radio kicked in. So later in the afternoon after my eyes had adjusted and I could take off the wrap-around sunglasses, I got to work. Once I could decipher words clearly, I just started right in and kept going until I was done.

Putting a book together is more than just the writing, though. For some books, like my bridge guide, the photos are almost as important. So Thursday morning I worked on the photos. My plan is to have a great color photo of how each bridge looks today and a black-and-white historic photo of when the bridge was under construction or newly finished. 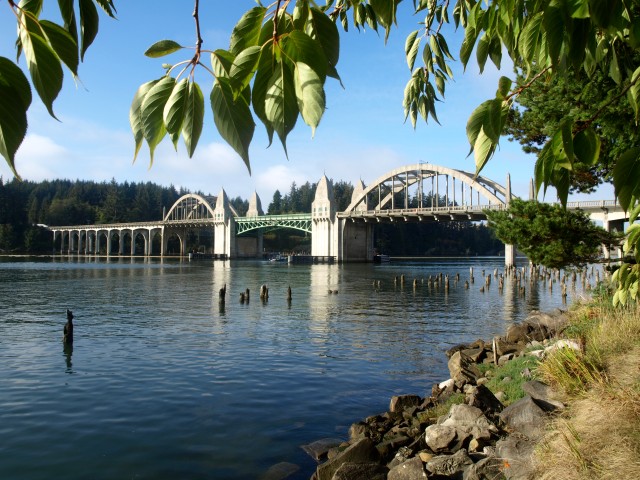 Color makes such a difference. Here is the Siuslaw River Bridge in color.

Crossings was totally black and white inside with a color cover. This guide will not be nearly as many pages and color has come down in price. So I’m going to do color inside. And with the cover of Crossings so popular, I’ll definitely do a color cover again.

I went through all 15 bridges and determined what I already have, which new photos I need. And which historic photos I need to locate and acquire.

Then I sent an e-mail to my contact at the Oregon Department of Transportation (ODOT) to give them a heads up as to what I was doing with “their” bridges now. Since everyone at ODOT who helped me with Crossings, knows about my passion for Oregon’s coastal bridges, they’re probably not surprised. In fact, the response was extremely positive and I was given contact info of someone else that also has a passion for Oregon’s coastal bridges. She may have tidbits that I don’t know about that I can add. Who knows! When I get going on a project like this, I try to stay open to suggestions and ideas and not be too set in concrete.

This historic photo shows the Yaquina Bay Bridge’s 600-foot main arch almost completed. I may use this photo in my guide. But for six bridges, I still need historic photos.

I also got the photo request for historic photos for six specific bridges headed to the ODOT person in charge of photos. If I can get all the historic photos I need from ODOT, that would be great.  For Crossings, I got most of them from ODOT, but also from two museums, the Siuslaw News, the Knight Library at the U of O, and some individuals. It took months. I’m hoping this will go a lot faster. Several of the disks of photos I received from ODOT for Crossings have photos I can use for this guide.

For the new photos, publisher Bob Serra will take some, I have some that I’ve taken for this blog, and for the ones farthest away, I may buy photos from photographers that I know from my days when I was an editor at Oregon Coast magazine.

After I get the writing fine-tuned, I’ll need to do some fact checking. ODOT will be helpful also with this.

This guide will have stiff covers, with fairly heavy paper inside, and be spiral bound. I like the idea of trying to keep each bridge text and photos to two opposing pages. Hmm!

When I couldn’t sleep the other night. I tossed a lot of ideas around. So I may do an alternate draft where I condense a lot of the paragraphs into bullet points. This is a guide and folks won’t be so much into reading paragraphs. Perhaps, this is a good idea. I could then look at both styles and see what I like best. Then I probably could keep each bridge text and photos to two opposing pages. I like that. Hmm!

Lots to think about! What I know for sure is that my second book is well on its way!

October 13, 11 a.m. Oregon City––The historic Arch Bridge designed by McCullough reopens in Oregon City on the weekend of October 13­14. I have been asked to be part of the festivities and will be giving my PowerPoint presentation at the Museum of the Oregon Territory on Saturday. The actual bridge reopening celebration will be on Sunday.