Posted on August 5, 2012 by crossingsauthor

I was profiled along with 54 other writers in Bylines: 2005 Writer’s Desk Calendar. What I wrote then is still true today.

“Writing gives me such a natural high––except when I’m trying to get started. I get antsy and cranky and find a zillion other things to do. Once the first draft is down on paper––what I call my creative vomit––I feel better. Then I start cleaning it up, and that’s my favorite part. I rewrite and refine until it shines. When I’m done, I feel on top of the world. Better than any drug.” I wrote this as part of a longer profile for Bylines, 2005 Writer’s Desk Calendar––a project by Linda Hagen Miller to celebrate the writing life. She is a talented writer I worked with when I was an editor at Northwest Travel magazine. I found the desk calendar yesterday and realized just how true it still is.

Here are a couple of examples from this week. 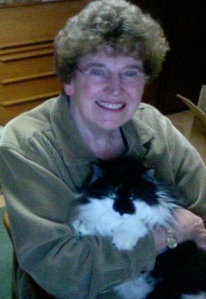 Here I’m sitting at my computer with my cat Groucho. He is often on my lap when I am writing.

On Thursday, I was going to write the last two sections for my second book, a Travel Guide to the Major Bridges of the Oregon Coast, and I got bogged down in the fine-tuning of the parts I had already written. Since that’s what I really enjoy doing, I spent most of the day doing just that. Never got around to the creative vomit part.

That evening, I had scheduled time to write my blog, but what I had planned to write about didn’t materialize. I was going to write about my trip down the coast on Thursday delivering copies of Crossings: McCullough’s Coastal Bridges and distributing flyers to the upcoming Florence Festival of Books (FFOB), but nobody needed any copies of the book and the flyers weren’t ready on Wednesday as planned. Soooo . . .

I could’ve written about how I was bogged down all Monday, Tuesday, and part of Wednesday with Florence Festival of Books business as co-chairman, but that might sound like whining. And then nobody wanted my book—more whining.

Friday I had to go to Eugene to take a couple of chairs over for repair work and––here’s the worth-mentioning part––to buy a new MacBook Pro. I am a Mac person; my desktop computer is my third. I’ve wanted a Mac laptop since forever. Back in 2003, I couldn’t afford one, so I bought a Gateway. It’s served well for a long time, but it’s time for a new one and even my computer repairman agrees.

I give PowerPoint presentations—probably 30-35 during the past year—and I have to have a laptop I can depend on. I have recounted the problems with my 2003 Gateway in my various presentations in my blog, but I never mentioned that every time I click my program, it takes at least three tries for it to actually pop up and that if I get set up and let it sit too long, it freezes and won’t let me click ahead to the next photo. I did write about the presentation in Port Orford last February when I got a dialog box in the middle of my presentation and had to have an unplanned intermission, so I could fix it. That was the last straw! With more presentations coming up, I couldn’t be happier now that I have my new MacBook Pro.

One of three bookcases in the living room. These are my neat bookcases. The ones in my office are crammed with books.

The week ended on a high note, but I still didn’t know what I was going to write about in my blog. So I did my zillion things yesterday. I cleaned the entire house, weeded outside, washed several loads, including some throw rugs that probably didn’t even need it. I even dusted every single item displayed among the books on three bookshelves in the living room.

Then I read a blog last night on Freshly Pressed by writer Peter Monaco about  how writer’s groups  keep you writing on a consistent basis and give you feedback and how important that is. I joined a writer’s group back in 1987 and helped keep it going for years. It was how I went from being a wannabe writer to a professional.  So I heartily agree with him and support writers groups. At the moment, I don’t belong to one. But as I read that blog posting, I realized that my blog functions as my writing group now. Although, I started it to help market my book, it’s what keeps me writing on a consistent basis.

After finding that desk calendar yesterday and reading the blog last night, I finally knew what to write about. . . . And now that I’ve finished writing, I feel on top of the world!

October 13, 11 a.m. Oregon City––The historic Arch Bridge designed by McCullough reopens in Oregon City on the weekend of October 13­14. I have been asked to be part of the festivities and will be giving my PowerPoint presentation at the Museum of the Oregon Territory on Saturday. The actual bridge reopening celebration will be on Sunday.

Judy Fleagle spent 22 years teaching 1st and 2nd grades and 21 years as editor/staff writer with Oregon Coast and Northwest Travel magazines.Since 2009, she has written five books: "Crossings: McCullough's Coastal Bridges," "The Crossings Guide to Oregon's Coastal Spans," "Around Florence," "Devil Cat and Other Colorful Animals I Have Known," and "The Oregon Coast Guide to the UNEXPECTED!!!."
View all posts by crossingsauthor →
This entry was posted in Uncategorized and tagged blogging, writing. Bookmark the permalink.