Proactive was not a word I paid much attention to a year ago—I could take it or leave it. Now, PROACTIVE sums up my marketing strategy in a single word. Here’s what I mean. A week ago last Thursday, I called nine venues carrying Crossings: McCullough’s Coastal Bridges in Florence and all the venues south to Bandon and north to Lincoln City. It’s a lot of calls and there were some callbacks needed the next morning and a couple that I followed up with an e-mail. 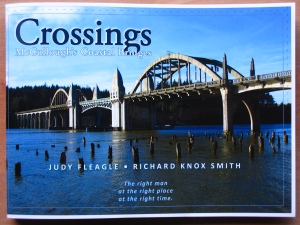 Crossings: McCullough’s Coastal Bridges has the Siuslaw River Bridge on the cover. In many cases, it’s the cover that sells the book.

I was on the phone to see if anyone needed any more books. I wasn’t going to just sit around and wait for people to call me. Several do if they need more books, but several don’t. After seven calls in Florence, nobody needed any, but I kept going. Things picked up––Incredible & Edible in Oregon wanted five and Sea Lion Caves wanted 10. That was more like it! Then I called south, and nobody needed any. Did I ever mention that this book adventure is like a roller coaster! So then I called north and found four who needed books in Newport: Hatfield Marine Science Center, Nye Beach Book House, Canyon Way Restaurant & Bookstore, and Yaquina Head Interpretive Center.

After a couple of hours, I’d sold 35 books. What I found most interesting was that at least three places didn’t realize they were out until I called. Then they started looking and couldn’t find any. Being proactive means that every so often I set aside time to make these calls. And all the places I deal with appreciate it. Besides, it gives me a chance to maintain contact. If there are more than a couple of stops, I deliver, which saves shipping costs. I also offer the standard 40% off to booksellers and try to be friendly and professional—not hard sell and haggling!

I was thrilled to sell 35 books, but it created a bit of a problem. I only had 24. Twelve more, the last of the second printing, were at publisher Bob Serra’s office. So I called to see if I could pick them up. And while I was there, I would sign some of the third printing because all the books we sell are signed. We try to have a couple of boxes (28 books per box) signed and on hand at all times.

With that settled, I delivered the books to Sea Lion Caves north of Florence and to Incredible & Edible Oregon down on Bay Street.

The next morning , I stopped by Pacific Publishing and got the last 12 books of the second printing and signed two boxes of the third printing and discovered that Dick Smith had already signed a box. Good! Because of that, I grabbed four to take with me. I might need them. There were three places I was going to stop, where I’d left messages and hadn’t received responses yet. 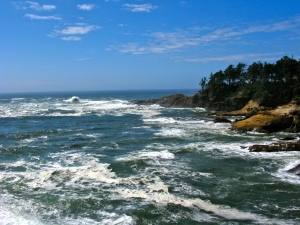 It was a beautiful day at the coast when I headed north to sell books.

Off I went. It was one of those gorgeous days––what we call warm (65 degrees) with gentle winds. The ocean was a teal blue with great waves and there were just enough clouds to make it interesting.  I wasn’t the only one on the road. There were the-weekend-after-the-4th getawayers and the schools-out family vacationers as well as the it’s-a-great-day-at-the-beach folks. A fair amount of traffic!

Besides having great food, Canyon Way sells my book in their bookstore.

People were everywhere in Newport. Hatfield Marine Science Center was really jumpin’ with kids everywhere. At Canyonway, I had never seen the big parking lot full before. It was really busy at the Interp Center at Yaquina Head too. And I had to walk blocks in Nye Beach because there was no parking left close to the shops/eateries area.

It was way past lunchtime by the time they were all delivered, and I was starved. So I dug out my little cooler and stopped at Yaquina Bay State Park where I enjoyed a great view of the Yaquina Bay Bridge while I ate. (No surprise, eh!)

This terrific bookstore in Waldport is in a new location and features Crossings.

On the way home, I stopped at three places two in Waldport and one in Yachats that carry the book trying to sell the last copy of the second printing, but no takers. On this trip, I was also passing out a stack of flyers about the 2nd Annual Florence Festival of Books to the bookstores.

When I got home, I had an email from the Josephine County Historical Society in Grants Pass, resulting from my trip to Grants Pass, Medford, and Ashland the previous week.  They wanted two books. That meant that the last of the second printing was sold, as well as the first of the third printing. Yippee!

Publisher Bob Serra of Pacific Publishing stands in front of the stack of 1,000 books of the third printing with his dog, Cholo.

We had reached a milestone: first two printings all sold––approximately 1,550 books. Dick outsold me three to one on the first 500, but I’ve been responsible for most of the second printing. A year ago, the stack of 1,000 (actually 1,050) books was very intimidating. Now we have another stack of 1,000 sitting in the same place, but this time, I know how to make it disappear. My same ol’, same ol’ will lead us to the next milestone too. In a word––PROACTIVE!

TO BUY THE BOOK

October 13, 11 a.m. Oregon City––The historic Arch Bridge designed by McCullough reopens in Oregon City on the weekend of October 13­14. I have been asked to be part of the festivities and will be giving my PowerPoint presentation at the Museum of the Oregon Territory on Saturday. The actual reopening celebration will be on Sunday.

Judy Fleagle spent 22 years teaching 1st and 2nd grades and 21 years as editor/staff writer with Oregon Coast and Northwest Travel magazines.Since 2009, she has written five books: "Crossings: McCullough's Coastal Bridges," "The Crossings Guide to Oregon's Coastal Spans," "Around Florence," "Devil Cat and Other Colorful Animals I Have Known," and "The Oregon Coast Guide to the UNEXPECTED!!!."
View all posts by crossingsauthor →
This entry was posted in Uncategorized and tagged hatfield marine science center, siuslaw river bridge. Bookmark the permalink.