Sometimes, I actually stop and read my promo materials for Crossings: McCullough’s Coastal Bridges, and this time, I realized they’re out of date.

Last year was the 75th anniversary of four of the major bridges I was writing about and the 20th of the Alsea Bay Bridge. Our goal was to get the book out in time to be a part of the celebrations and we achieved our goal. But that was last year. It’s no longer the 75th anniversary. And, of course, that was in our promo materials—specifically the 8 ½ by 11 poster. I offer the poster to all booksellers, and I use it whenever I give a presentation. We removed the souvenir copy reference and the anniversary references. We added “One of the world’s greatest collections of bridges designed by one of the world’s greatest bridge designers.” Tis true and won’t ever have to be changed. 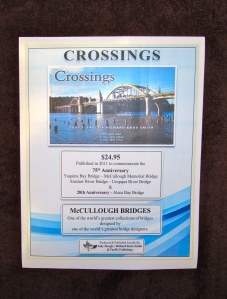 It needed to be updated.

Making the changes was a collaboration. I sketched out what I wanted a couple of weeks ago and went over it with Bob Serra at Pacific Publishing. He then handed it over to his very computer savvy assistant, Patrick Looney. When the sample was ready last week, I went in to give it a once over. I found a couple of things to change and then Bob took a look and found a couple of different ways to lay it out. Back to Patrick. Then Bob gave the revised version an edit the other day. 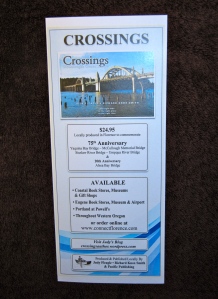 One minor change and these were ready to go.

I also had him change one little thing on the smaller flyer. We had listed a couple of places in Portland where the book was available and by removing one, I could slip in a line that said, “Throughout Western Oregon.” That’s true now, but it sure wasn’t when these were last revised. Patrick ran off the posters and flyers and cut the flyers that were three to a page. I picked them up Wednesday.

I wanted these for my trip south. I was leaving Thursday for Grants Pass, Medford, and Ashland to place the book in bookstores, libraries, and historical societies/museums. The plan is to make a few stops in Grants Pass on the way down and spend Friday and Saturday in Ashland and Medford. Then head back home on Sunday. The friend I stay with lives between Medford and Ashland and is in her mid-90s . She is as independent as they come. She always has a pot roast and veggies in the oven and brownies on the counter when I get there, and I’ve known her since I was 18. We’ll have a grand time, whether I sell many books or not. The main thing is that I’m spreading the word about Crossings in new territory. Even if a venue doesn’t order books now, they may later.

I’ll also be taking flyers for our upcoming 2nd Annual Florence Festival of Books that will take place September 29. So I’ll be leaving little stacks wherever I go in libraries and bookstores.

I’m co-chair again of the planning committee and after a few meetings, everything is falling into place. The last of our sponsors have signed on, our first notices have gone out to a very large list of authors and a smaller list of publishers, and our first applications have come in. For each one I send a follow-up letter. And there are numerous questions to be answered that are often funneled to me. 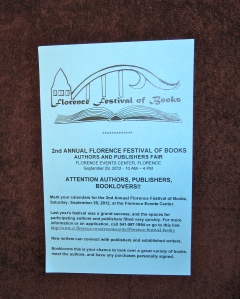 I tweaked that first notice that was sent via e-mail to folks we want to participate to also include those that we simply want to attend––booklovers and new or wannabe writers. This new tweaked version will be a flyer. I dropped off my sample at a copy service and requested it be shrunk to two per page on blue paper for a total of 500 copies after being cut. I picked those up Wednesday also.

So the festival flyers and the book flyers and posters have been packed along with my sales binder and delivery folder and a couple of boxes of books. I’m ready!

I made approximately 22 calls to set up this trip. I found that a lot of bookstores are no longer in business, and business is down. Duh! I guess we all know that. The listing I found on the Internet of bookstores in the Ashland/Medford area also included a couple of residences that were definitely not bookstores. Surprise on both ends of the line. But the funniest call was to Ashland University. That name for the college in Ashland didn’t sound right to me, but I called anyway. I made it through the phone system to the University Library and to the acquisitions person for nonfiction books. Then, before bursting into my spiel, I asked, “Are you located in Ashland, Oregon?”

The response, “No, this is Ashland, Ohio.” We both chuckled, I thanked her, and hung up. The college in Ashland hadn’t changed its name after all. It’s still Southern Oregon University just like I thought.

I’ll also be meeting with a much published author, Dennis Powers, who lives in the area and is an emeritus professor at SOU Maybe I’ll pick his brain a bit. Networking can’t hurt.

Next week, I’ll let you know how it all turns out.

Note: I’m posting this a day early because I’ll be gone on Friday.

The half-hour interview with Dr. Veronica Esagui for the “Author’s Forum” program on public access TV in the Portland Metro area has ended it’s two-week run through the first half of June, but can be seen on YouTube in two parts: Google  Judy Fleagle YouTube.

October 13, 11 a.m. Oregon City––The historic Arch Bridge designed by McCullough reopens in Oregon City on the weekend of October 13­14. I have been asked to be part of the festivities and will be giving my PowerPoint presentation at the Museum of the Oregon Territory on Saturday. The actual reopening celebration will be on Sunday. (Dates are tentative. ODOT has until the end of June to set reopening date.)