Posted on June 9, 2012 by crossingsauthor

I’ve begun my second book and it will be everything like Crossings: McCullough’s Coastal Bridges and nothing like it. It will have the Oregon Coast bridges once again as the subject matter, but it should be relatively easy to put together––not the monumental project that Crossings was.

This second book will be a guide to the bridges of the Oregon Coast—primarily the McCullough bridges plus a few other major ones. The bridges on the Oregon Coast are one of the world’s greatest collection of bridges and all but three were designed by one of the world’s greatest bridge designers. So it just makes sense that a guide—filled with a few interesting facts and a couple of photos about each bridge––would be a given. And it would be a natural to sell alongside Crossings.

Whenever I sign a book, I write “This has been the project of a lifetime . . .” and that is so true. Crossings took one year of my life, all day every day. And that doesn’t count the interviews I had with old-timers between 2007–2009 and the months of trying to figure out how to put it all together before I actually started working on it. The guide, on the other hand, will simply be putting together four blogs from this past year. Actually, there’s more to it than that, but it should certainly be doable this summer. 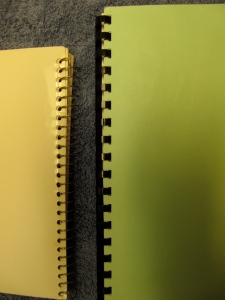 On the left is the single spiral that can come loose and snag clothing and on the right is the least expensive plastic type. I didn’t choose either of these types.

This sturdier type of spiral binding seems better suited to what I want to do.

Once I made the decision to go for it, I looked around my bookshelves to see what kind of binding, size, cover, etc I wanted. I decided that as a guide, I wanted it to be spiral bound so it would stay open and could even be flipped back upon itself. So I got out all my spiral-bound books and laid them on the table. I had everything from the inexpensive plastic spiral, to the single long spiral that can work it’s way out and snag your clothing, to the individual metal spirals within square holes. That last type of spiral looked good as well as sturdy.

These are three of my favorite book covers. One is a guide to the great lodges of the West, guide to sea otters, and a guide to microwave cooking.

Then I looked carefully at all the books I liked the look of and made some decisions regarding size, cover, and inside pages. I’ll probably go with a color photo on the cover, since that has been so successful with Crossings.

I had three books with me (not the ones in the photo above) when I went to see Bob Serra at Pacific Publishing, my publisher for Crossings. Each book represented either the type of spiral, weight and look of a cover, or weight and glossiness of inside pages that I wanted. I told Bob my subject matter and went over the various components that would make the perfect guidebook to the bridges. Before long he was as excited as I was. I gave him the projected table of contents scribbled with a pencil on the back of an envelope and estimated page count. Much to my amazement within days, he had a quote from the printer.

What had I gotten myself into?  Here was a publisher and a printing company ready to print a book that I hadn’t even put together yet, nor did I have the funding in place. After my initial panic, I ran through all I needed to do and when I wanted it available for sale. Then I started putting together a plan and timeline.

I have to come up with the funding, write up text for three more bridges, come up with beautiful color photos for all 14 or so bridges, contact ODOT for more historic photos, find all the photos I used on those four blogs, and rework the edit from the four blogs to fit the new guide format. I need to have all this done and then submit it to the editor to be edited, formatted and designed, and prepared camera ready to go to the printer by the end of summer, in order to have it for sale on September 29, at the 2nd Annual Florence Festival of Books where I am co-chairman once again. Whew!!

So this week I began reworking the edit. It has begun. I’ll keep you posted on how it goes.

Note: With my interview on the “Author’s Forum” program currently on public access TV in the Portland Metro area and on YouTube since May 20, I’ve received lots of positive comments. Some of those have been from you, my persistently faithful blog followers. Thank you! This has been very exciting for me. Just Google—Judy Fleagle YouTube––to see both parts of the half-hour interview.

June 1–14, various times, Portland Metro area––TV half-hour interview with Dr. Veronica Esagui on the “Author’s Forum” on Channel 23 (Comcast/Xfinity cable service) in Oregon City and West Linn. For the rest of the Metro area it can be seen on Channel 11 (Comcast/Xfinity) and Channel 22  (Frontier FiOS). All three are Community Access Network channels. It is also accessible online at http://veronicaesagui.net/authorsforum-index.html. And on YouTube at www.youtube.com/user/42kes?feature=results.main or Google Judy Fleagle YouTube

September or October, Oregon City––When the historic Arch Bridge designed by McCullough reopens in Oregon City (date not set yet), I have been asked to be part of the festivities and give my PowerPoint presentation at the Museum of the Oregon Territory.

Judy Fleagle spent 22 years teaching 1st and 2nd grades and 21 years as editor/staff writer with Oregon Coast and Northwest Travel magazines.Since 2009, she has written five books: "Crossings: McCullough's Coastal Bridges," "The Crossings Guide to Oregon's Coastal Spans," "Around Florence," "Devil Cat and Other Colorful Animals I Have Known," and "The Oregon Coast Guide to the UNEXPECTED!!!."
View all posts by crossingsauthor →
This entry was posted in Uncategorized and tagged bridge designers, mccullough bridges, monumental project, spiral binding. Bookmark the permalink.