Posted on June 1, 2012 by crossingsauthor

When I was placing my book Crossings: McCullough’s Coastal Bridges in Astoria about 10 days ago, I was reminded of some of the reasons why I enjoy the town.

Because it’s the oldest town west of the Rockies and dates back to when Lord Astor built Fort Astoria in 1811, museums are a given. The Flavel House (441 8th Street) is my favorite, look for the wonderful shutters that recess into the thick walls and the 10-foot or so high pocket doors that slide with the touch of a finger. This elegant Queen Anne mansion built by Captain Flavel in 1884 was built with exotic woods and elegant furnishings transported by his ships from throughout the world.

Flavel House, the museum, is well known. What is not so well known is the “other” Captain Flavel House (627 15th Street between Franklin and Grand) that is also listed on the National Register of Historic Places. It was built in 1901 in the Colonial Revival Style on a huge lot. It, too, was built with the best the world had to offer. Captain Flavel built this one for his son George Conrad Flavel, and it’s still owned by descendants of the Flavel family. Unfortunately, it looks like a setting for the house in Psycho if the movie was to be remade. And it has been in this neglected condition since before 1989 when I saw it for the first time while doing a story about historic homes in Astoria for Oregon Coast magazine. It’s a shame for such a grand house to be in such a deplorable condition. 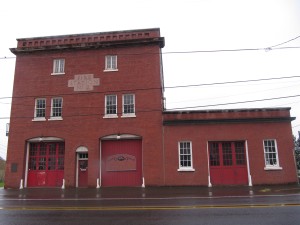 The Uppertown Firefighters Museum, corner of 30th and Marine Drive, has an extensive collection of firefighting equipment dating back to 1877. Originally, the building, constructed in 1896, was part of North Pacific Brewery.

Another museum I enjoyed that was special was the Uppertown Firefighters Museum. But, unfortunately,  I just learned that it’s not open at this time. Hopefully, it will be in the future.

Astoria truly does have San Francisco-type hills where you have to wait till the hood of your car levels out before you can see any cross traffic, or when cresting a hill, the hood has to dip so you can see where the road is. Climbing some of these streets will get you to the Astoria Column (just follow the signs), located on the highest hill in town. On the Column, more history spirals up  in mural fashion, but don’t head up the hill unless it’s a clear day. Then, the view is remarkable, even if you don’t climb the 164 steps to reach the top of the Column. Climbing that spiral staircase isn’t so bad, if you take them slowly. By the way, from the top of the hill, you can look south and see the Old Youngs Bay Bridge and the Lewis and Clark River Bridge, both built by McCullough in 1922. These are early examples of his movable bascule bridge designs.

Something else to do when the weather is good is to walk along the River Walk that parallels the Columbia River for four miles and is paved. If you get tired of walking, ride the Astoria Riverfront Trolley (503-325-6311, between Basin and 39th streets). It’s a restored 1913 model. The trolley operates along 2.6 miles of riverfront from May through September, noon to 7 p.m. daily, and the cost is minimal. Last I heard, a round-trip is $1 and an all-day pass is $2.

Whether you walk or ride, you can familiarize yourself with today’s Astoria. You’ll see that it’s not a glitzy town, but a working waterfront with some abandoned buildings and rusting machinery. You’ll also see that some of the former canneries and fish processing plants of the past have morphed into upscale shops and lodgings.

Not all fish processing facilities have disappeared, though. Josephson’s Smokehouse and Specialty Seafood (106 Marine Drive, 503-325-2190), has been around more than 90 years and is into the fourth generation of the founding family. This is where I’ve had the best tasting smoked salmon ever. Here you can eat it fresh from the smoker or take some with you. They use natural alderwood smoke and never use preservatives, dyes, or additives. This place could become a habit every time you visit Astoria.

This is a river town, and a great way to see it is from the river. Take a cruise with Columbia River Eco Tours (503-468-9197) on Captain Christopher Lloyd’s 40-foot cruiser. He’s friendly, enthusiastic, and knowledgeable about the history of the town and the lower part of the river as well as the wildlife of the area. Though not cheap at $95–$150 for 2- or 3- or 4-hour cruises, it’ll make great memories. But I’d only go when the weather is good.

The Columbia River Maritime Museum is one of the premier places to visit in all of Oregon. It was stormy, unfortunately, when I took this photo in May. 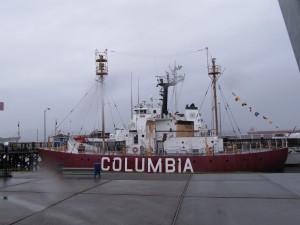 Another less expensive way to learn about the town and river is to visit the Columbia River Maritime Museum (503-325-2323, 1792 Marine Drive), one of the premier attractions in the state. What you might not know is that with the purchase of a ticket, you also can board the Lightship Columbia. On duty from 1951 until 1979, it has been at CRMM since 1980. Take a self-guided tour to see what it was like to be one of a crew of 17 (with 10 always on duty) stationed on a floating lightship a few miles west of the Columbia River Bar. The lightship has the same hours as the museum, but will close for safety reasons during extreme tides or weather. The museum is––but the lightship is not––recommended for those with mobility challenges.

The Astoria Aquatic Center is open to out-of-town visitors. And is a great place to duck inside on a rainly day.

If it is raining, head indoors to the Astoria Aquatic Center (503-325-7027, 1997 Marine Drive), which is open to out-of-town visitors as well as residents. One of its four pools should be just right for you. The recreation pool really is quite large with a lazy river as part of it as well as two water slides, one of which is huge. For those who want to swim laps, check out the 25-yard long lap pool. Toddlers and infants have their own shallow pool. And there’s a large hot tub to soak those aching muscles. The building also houses a Fitness Center.

The Liberty Theater is a beautifully restored theater in downtown Astoria where live musical and dramatic performances are held.

Another way to escape bad weather or to simply enjoy live entertainment is to check out whatever is happening at the beautifully restored Liberty Theater (503-325-5922, 1203 Commercial Street) in downtown. Checking their upcoming schedule, I noticed in June between the 16th and 30th, are performances of the Astoria Music Festival showcasing classical music. And on July 3, the North Coast Symphonic Band performs.

Most city parks aren’t listed as tourist attractions, but Tapiola Park (503-325-7275, 900 W Marine Drive) has that distinction. It also was the recipient of an award of excellence by the League of Oregon Cities in 2005. What makes Tapiola special is the “super rad” skateboard park built by Dreamland (helmets required here). And the miniature replica buildings from the Astoria area for kids. Expect to see small versions of Flavel House and Fort Clatsop as well as others. There are lots of other climbing and play areas for kids there as well as a sandbox for toddlers, benches for attentive parents, and a covered picnic area. Coming from the south, at the turnaround take the first turnoff to Marine Drive/Hwy 101 Business Route and turn left at Dairy Queen on South Denver Street.

Outside of town are more attractions. Fort Stevens, which in a former life between the Civil War and World War II was an active fort, has much to offer, including the historic area and the Military Museum located there. Fort Clatsop has been rebuilt since the fire some years ago and is better than ever. And heading east of Astoria along the Columbia, is the Twilight Eagle Sanctuary––where I’ve seen eagles, great blue herons, various ducks, Canada geese, and more wildlife.

And, of course, you can’t miss the Astoria–Megler Bridge that towers over the Uniontown district of Astoria and ends up across the Columbia in Washington state. No, it’s not a McCullough Bridge. It opened in 1966 and McCullough died in 1946. But it is one of the great bridges in Oregon. I remember when it was built and horrified at the $1.50 bridge toll to cross it. At just over four miles in length, it is the longest continuous truss span bridge in North America. The tolls were discontinued at the end of 1993 when the $24 million cost was paid off more than two years early.

Note: Starting today (June 1, 2012) in Multnomah, Clackamas, and Washington counties, my interview on the “Author’s Forum” on public access TV will be shown for two weeks.

June 1–14, various times, Portland Metro area––TV half-hour interview with Dr. Veronica Esagui on the “Author’s Forum” on Channel 23 (Comcast/Xfinity cable service) in Oregon City and West Linn. For the rest of the Metro area it can be seen on Channel 11 (Comcast/Xfinity) and Channel 22  (Frontier FiOS). All three are Community Access Network channels. It is also accessible online at http://veronicaesagui.net/authorsforum-index.html. And on YouTube at www.youtube.com/user/42kes?feature=results.main

September or October, Oregon City––When the historic Arch Bridge designed by McCullough reopens in Oregon City (date not set yet), I have been asked to be part of the festivities and give my PowerPoint presentation at the Museum of the Oregon Territory.

Judy Fleagle spent 22 years teaching 1st and 2nd grades and 21 years as editor/staff writer with Oregon Coast and Northwest Travel magazines.Since 2009, she has written five books: "Crossings: McCullough's Coastal Bridges," "The Crossings Guide to Oregon's Coastal Spans," "Around Florence," "Devil Cat and Other Colorful Animals I Have Known," and "The Oregon Coast Guide to the UNEXPECTED!!!."
View all posts by crossingsauthor →
This entry was posted in Uncategorized and tagged colonial revival style, oregon coast magazine, uppertown firefighters museum. Bookmark the permalink.
%d bloggers like this: