Once you know a little about McCullough bridges, you won’t just drive through or over them; you’ll start to experience them. This week’s bridges are located on the south coast at Reedsport, North Bend, and Gold Beach.

The Umpqua River Bridge under construction. Notice the road cut on the island has begun.

* Umpqua River Bridge––This bridge on the northern edge of Reedsport, although one of McCullough’s larger bridges, is still one of his least known. Even the folks in Reedsport didn’t know much about it, so I had to spend more time researching this bridge than any other when I was writing Crossings: McCullough’s Coastal Bridges. This made it the most frustrating, but also the most fascinating bridge to research.

Still under construction, but it is beginning to take shape.

For example, I learned that in trying to figure out how to connect the bridge to the island on its northern end, the original plans called for drilling a 550-foot tunnel through the ridge that obstructed the southern side of the island. Imagine that! That plan was scrapped, however, in favor of making one of the largest road cuts in Oregon up to that time. The ridge was 180 feet high and 140 feet of it––most of it––had to go. A swath was cut through that was 600 feet long and 400 feet wide at the top with gradual slopes to reduce risk of slides. See if you can see where the giant road cut was made the next time you cross Bolon Island. 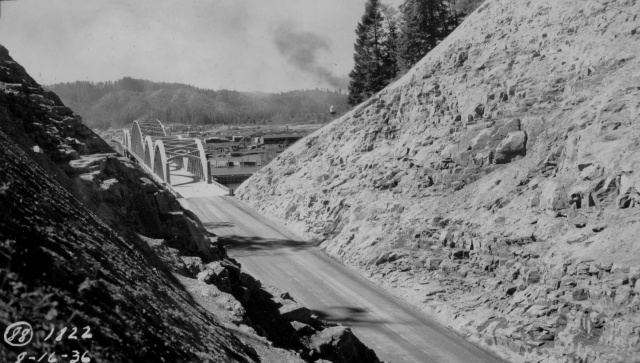 The bridge is completed and the road open through one of the largest road cuts in Oregon highway construction at the time.

This bridge opens as a swing bridge to let marine traffic through. At 430 feet, the swing span designed by McCullough was the largest swing span in Oregon. The bridge tender’s house is located high in the cross bracing and is only manned when the bridge is to be opened. Today swing bridges are usually seen only on railroads.

Also worth noticing are the railings made of reinforced concrete with a sort of four-petaled flower design––not the usual Gothic pattern that McCullough had on many of his bridge railings. Go under the bridge and look through the support arches to get a cathedral effect. It’s quite lovely. Because the Umpqua River Bridge is the most functional looking of the large coastal McCullough bridges, you just have to look a little harder to find the beauty in it.

* Coos Bay (McCullough Memorial Bridge)––At a little more than a mile across, this bridge was the largest bridge built in Oregon at the time and still is. The Astoria–Megler Bridge is longer but it ends up in Washington. Whenever I give a presentation, I like to mention the cost of this bridge as a contracted estimate and the final costs arrived at 2 ½ years later. They are incredibly close. The estimate was  $2,123,318 and the final cost was $2,126,132.29––only a difference of  $2,814.29. Amazing! 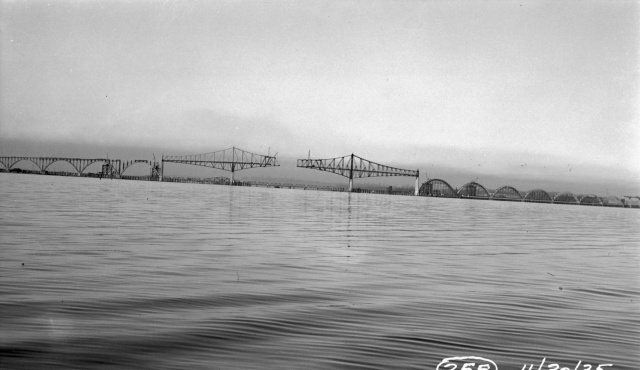 At this point, the bridge––with its double cantilevers still under construction––looks more like an Erector Set.

This bridge was built with a double cantilever design. A cantilevered bridge is built by projecting out from a supporting pier on one side while maintaining a counterbalance on the opposite side to keep the first side from tipping over into the bay. That meant that whatever was done on the north side had to be done on the south or counterbalancing side or have supports in place, either temporary or permanent. And this whole process was repeated 793 feet away on the other side of the navigation channel. Building them and then having them connect precisely in every way in the middle to complete the 1,708-foot steel truss took endless careful planning. It was considered a marvel of engineering at the time. And the three sets of stairways leading from the bridge down below are incredibly ornate—absolute works of art. Once down below, look through the arches to obtain the cathedral effect.

Of all the hundreds of bridges McCullough was involved with, this was his favorite. And in 1947, the year after McCullough died, this bridge was renamed the Conde B. McCullough Memorial Bridge in his honor.

The Rogue River Bridge, built in 1931, showed that McCullough could design large reinforced concrete bridges at the coast.

* Issac Lee Patterson Bridge––This bridge, named after Oregon’s governor from 1927 through 1929, crosses the Rogue River at Gold Beach and is the oldest of the large coastal bridges. It was built in 1931 and dedicated in 1932. Upon completion, this bridge was the largest bridge between San Francisco and Astoria. With its seven deck arches below the road deck, you don’t see them when you cross, but because of how this bridge is sited, whether you are coming from the north or the south, you get a fabulous view.

During construction, McCullough tried a new technique never used in the United States before. It was called the Freyssinet method, where through a complicated process, lighter, more graceful supports were possible due to the use of less concrete. McCullough wanted to see how it worked in Oregon. He discovered that it worked, but because it required more skilled labor, it didn’t save any money. So he never used it again. But he shared what he learned in a technical report, adding to the annals of bridge building. And in 1982, the I.L. Patterson Bridge was designated a National Historic Civil Engineering Landmark by the American Society of Civil Engineers.

Since its five-year restoration begun in 2000, it looks terrific and LED lights at night highlight its deck arches, making them especially lovely when there’s a little fog.

Bring your camera along as you experience each of these McCullough bridges.

Crossings: McCullough’s Coastal Bridges can be yours for $24.95 plus $4.99 shipping. Order from Pacific Publishing at http://www.connectflorence.com or pacpub@oregonfast.net. It is also available on the coast in bookstores, museums, and gift shops; in Eugene at the airport, the historical museum, and several bookstores; in Portland at Powell’s and the Oregon Historical Society; in Made in Oregon stores throughout the state; and more and more bookstores and libraries in western Oregon.

Judy Fleagle spent 22 years teaching 1st and 2nd grades and 21 years as editor/staff writer with Oregon Coast and Northwest Travel magazines.Since 2009, she has written five books: "Crossings: McCullough's Coastal Bridges," "The Crossings Guide to Oregon's Coastal Spans," "Around Florence," "Devil Cat and Other Colorful Animals I Have Known," and "The Oregon Coast Guide to the UNEXPECTED!!!."
View all posts by crossingsauthor →
This entry was posted in Uncategorized and tagged cars, swing span. Bookmark the permalink.
Loading Comments...
%d bloggers like this: