Leaving my camera home when I went to Oregon City last week turned out to be a good thing after all. After giving myself a good cussing out, I sent every one I met on the trip an email titled Strange Request, asking for photos of their bookstore, library, local McCullough bridge, or still shots of the TV show taping. And everyone came through. Not all arrived in time for last week’s blog, however, even though I held off posting until the next day. When I started this blog, I said I would post every Friday and that’s what I’ve done––except for last week. So this week I’m posting the photos that didn’t quite make it in time for last week.

Dr. Veronica Esagui asking a question during taping of "The Author's Forum." 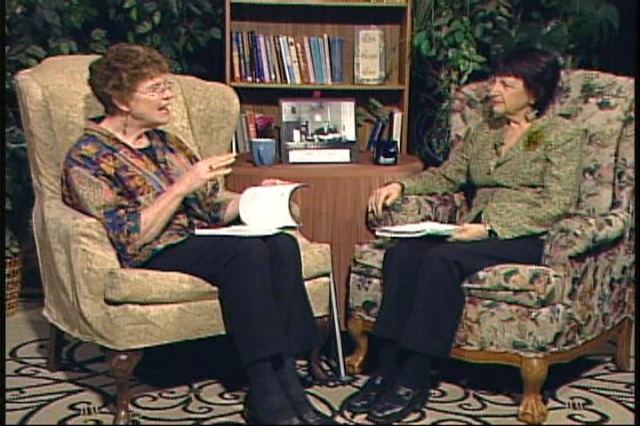 My purpose for going up to Oregon City was to be interviewed for “The Author’s Forum,” a program on public access channels in the Portland area to be aired the first two weeks in May. It was very exciting, but at the time, I was most concerned about finding the recording studio and not being late. Then, because it was raining, getting the books and photo I had with me as props inside without getting them wet.

I didn’t really worry about what I looked like until Veronica asked if I wanted a mirror to comb my hair or refresh my lipstick. I said, “No, I’m fine.” I was afraid I wouldn’t be able to fix what I saw and would stress over it. And I wanted all stressing and focusing to be on the book, not me. After we began, that’s exactly what happened when she asked me if I thought I could build a bridge now after focusing so much on bridges during the past couple of years. At first, I didn’t know what to say. Then I remembered playing with the computer at the Alsea Bay Bridge Interpretive Center in Waldport and using its build- your-own-bridge program and how my bridge collapsed when the first big truck drove over. I told her about that experience and added that if I tried again today, I should do much better.

This is a popular bookstore in Corvallis that specializes in used books.

On my way to Oregon City, I stopped at Browsers’ Bookstore in Corvallis and they were very friendly on the phone as well as when I got there, and they expressed interest in my book. Even though they don’t even handle new books, they bought my book anyway! Love those guys! So here’s a thumbs up to Browsers’ inside and out.

I mentioned last week the traffic problems caused in Oregon City by the closure of one of the two bridges crossing the Willamette River. The Hwy 43 historic Oregon City/West Linn Arch Bridge has been closed since January 2011 and isn’t expected to open until fall 2012. It was built in 1922 and opened in January 1923 and  has been the pride of Oregon City and West Linn ever since. Because it was designed by Conde B. McCullough (“one of the top bridge engineers in the world” according to ODOT), it is considered to be a one-of-a-kind architectural treasure. And it is being totally restored to the tune of  $10.6 million. The I-205 Abernethy Bridge is the detour for users of the old bridge. This is a much newer and busier bridge. Duh! It’s a major freeway. One represents historic elegance and the other modern efficiency, and since they sit within visual distance of each other, the contrast is striking.

Oregon City's Arch Bridge, built in 1922, is currently undergoing major renovation and will reopen in fall of 2012.

As it turns out, this bridge renovation affects me. Yesterday, while in our local library, my cell phone rang and it was Roxandra from the Museum of the Oregon Territory in Oregon City, inviting me to come and do my PowerPoint presentation about McCullough’s coastal bridges when the Arch Bridge reopens. Since they don’t know exactly when the renovations will be completed, we didn’t set a date—just that it will be September or October. Whenever, I’ll be there. I’m stoked!

Everywhere you look in Oregon City is an historic building. It’s fun to ride around and just gawk—some of the old houses are now historic museums. Speaking of historic buildings, the library is back in it’s old home––the Carnegie Library––built in 1912, albeit only temporarily. In 1995, it moved to a location in a shopping mall, but that is now being torn down. They had to find a temporary home until their new building is built. So they moved back to their long-time Carnegie Library home. It’s crowded, but working fine until their new facility is ready. It’s a beautiful building and much beloved by the city. I couldn’t believe that a whole block was dedicated to a library way back when it was built. On maps, it is referred to as the Library Block.

Crossings: McCullough’s Coastal Bridges can be yours for $24.95 plus $4.99 shipping. Order from Pacific Publishing at http://www.connectflorence.com or pacpub@oregonfast.net. It is also available on the coast in bookstores, museums, and gift shops; in Eugene at the airport, the historical museum, and several bookstores; in Portland at Powell’s and the Oregon Historical Society; and in Made in Oregon stores throughout the state.

Judy Fleagle spent 22 years teaching 1st and 2nd grades and 21 years as editor/staff writer with Oregon Coast and Northwest Travel magazines.Since 2009, she has written five books: "Crossings: McCullough's Coastal Bridges," "The Crossings Guide to Oregon's Coastal Spans," "Around Florence," "Devil Cat and Other Colorful Animals I Have Known," and "The Oregon Coast Guide to the UNEXPECTED!!!."
View all posts by crossingsauthor →
This entry was posted in Uncategorized and tagged mccullough bridge, oregon city, portland area, strange request. Bookmark the permalink.