Posted on February 24, 2012 by crossingsauthor

As we were driving through Port Orford on the way to Gold Beach, I asked Jan Jett, fellow writer and traveling companion, to look out for the library in Port Orford. “There it is,” she said. “And look, look your name!” I took a side street around the block and parked half in the street to see the reader board that read, “Author Judy Fleagle, February 19, at 3 p.m.” Wow! My name in lights! Okay, not marquee lights, simply reader board lights and shared with a number of other messages. But, hey! What a thrill! I stood out in the heavy-duty drizzle waiting for my name to come up again, then took a photo. 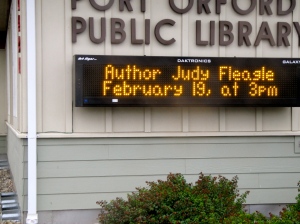 My name in lights!

We left Florence about 7:30 a.m. and arrived in Gold Beach about 10:20 a.m. We would be attending the South Coast Writer’s conference Friday evening and all day Saturday. I wanted to arrive early with plenty of time to deliver books and check out new venues for Crossings: McCullough’s Coastal Bridges in Gold Beach before heading to Brookings to do the same. I had called ahead, so there would be no surprises. I dropped off 12 books at Jerry’s Jet Boats gift shop where there is also a museum of the Rogue River. Since I cover the bridge that crosses the Rogue, this would be a good fit for the book. We then headed to the library where I gave my pitch and sold one. And I sold two more to Gold Beach Books that have been selling my book since June. They do a marvelous job highlighting local and coastal authors.

After checking into our motel, we headed a short distance outside of Gold Beach to a fabulous viewpoint and ate the lunches we had packed. The rain had stopped and it was lovely.

In Brookings I sold four books to the library and five to Flora Pacifica, a nursery and dried floral arrangement business with a small retail store. The business provides jobs and a place for locals to sell their plants as well as a place to attend classes about plants. Because the business was in the process of upgrading the retail store to include books, my timing couldn’t have been better.

I also stopped by the Book Dock and dropped off PR material before heading back to Gold Beach. I would see the owner at the writers conference.

After a wonderful dinner at Playa del Sol, we headed to the fairgrounds and the first event of the 17th Annual South Coast Writers Conference. We heard from the keynote speaker. And other conference workshop presenters read briefly from their works. This conference is like a a yearly reunion of Oregon writers, and I’ve been to about 14 of them.

On Saturday, I attended four hour-and-a-half workshops with terrific leaders. Two were lecture and discussion and two were lecture with chances to write.  So I have the beginnings of some possible new pieces.

The first workshop was by the keynote speaker, Stefanie Freele, on flash writing––pieces between 500 and 1,000 words. Two were by the retiring editor of Ooligan Press at Portland State College, Dennis Stovall, on the history of publishing and building a freelance career and life.

My fourth workshop was on poetry with Yachats poet Drew Myron. Although I’ve written a few poem-like pieces and even had one published, it’s new territory for me. Drew had us each introduce ourselves; I mentioned spending the past two years writing a book and then marketing it. She asked me about the book and when I told her, she responded that she had bought it, read it, and thought it was great. I was surprised and thrilled.

That evening Jan and I met a long-time friend of mine for dinner.  The next morning we finished waking up at Gold Beach Books over a latte and goodies at Rachel’s coffee shop within the bookstore. Then we had the luxury of spending as much time as we wanted perusing books, reading quotes on the walls, looking carefully at rare books behind locked cases, and checking out artwork by local painters and photographers. Since this is my favorite bookstore on the coast, I had to restrain myself from buying everything I wanted. Then we went to a library fundraiser where books and DVDs were on sale. I bought a bag full for $2. What a deal! Before leaving Gold Beach, we met another long-time friend of mine for lunch.

Then off to Port Orford for a PowerPoint presentation. I had planned to get there an hour early to set up. We, okay mainly me, talked so much at lunch that we left 15 minutes late. Then we were further delayed when I was stopped by an Oregon State Police officer for having my tires cross the fogline too often. Evidently, whenever I talk, I use my hands and the car moves a bit to the right. Fortunately, he let me off with a warning to “please do a better job of staying in your lane.” So Jan took on the job of letting me know every time I started to use my hands in talking while driving. Who knew!

I arrived at 2:30 instead of 2 p.m. for a 3 p.m. presentation, but I was able to get everything set up in time. The Port Orford Public Library had chairs set up for approximately 25 and 36 came. I had been asked by the Langlois Public Library to come and both libraries publicized it. They obviously did a super job.

It was an attentive audience with good questions afterward. Actually, they were positively great because my computer had a technical glitch about two-thirds through that took some time to fix, and no one left. The first clue to the problem was a dialog box that appeared on the screen during my presentation. So I told everyone to take a little break, stretch, talk to their neighbors, and I would fix the problem

Ha! I didn’t have a clue. I evidently clicked the wrong choice on the dialog box because I got black screen with white print. I selected something that shut the laptop down, and when I started it again, it was in slow motion. At least three times  I thought it had frozen and walked away saying, “I’m gonna finish without the pictures.” Then it would come to life, I’d return, and continue clicking. Eventually, I got back into my PowerPoint program and to the last photo I had shown. The audience cheered, and I continued on. They even bought six books and half of them told me they already had the book. Loved ‘em all.

Bottom line: I sold 30 books during the weekend, placed the book in two new venues plus all four libraries in Curry County, and several others want me to stop by when I return in June. I also had a wonderful time at the conference and enjoyed seeing long-time friends. As of this trip, the book is now available in every town on the coast. Whew!

Crossings: McCullough’s Coastal Bridges can be yours for $24.95 plus $3.99 shipping. Order from Pacific Publishing at http://www.connectflorence.com or pacpub@oregonfast.net. It is also available on the coast in bookstores, museums, and gift shops; in Eugene at the airport, the historical museum, and several bookstores; and in Portland at Powell’s and the Oregon Historical Society.

Judy Fleagle spent 22 years teaching 1st and 2nd grades and 21 years as editor/staff writer with Oregon Coast and Northwest Travel magazines.Since 2009, she has written five books: "Crossings: McCullough's Coastal Bridges," "The Crossings Guide to Oregon's Coastal Spans," "Around Florence," "Devil Cat and Other Colorful Animals I Have Known," and "The Oregon Coast Guide to the UNEXPECTED!!!."
View all posts by crossingsauthor →
This entry was posted in Uncategorized and tagged jet boats, marquee lights, port orford. Bookmark the permalink.